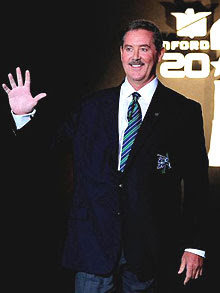 "Then the Fox came in - doing nine months - and things brightened up in the rag shop. First thing he done was to fix with the screw for me to sit opposite him at his table. Next we straightened the doctor's orderly with tobacco, so I got a jar of malt every week and a pint of milk every day. I was getting as strong as a lion. We were fucking about on the table all day, having a laugh and telling jokes. The times started to fly. I had about a month to do when the Fox said to me one morning, just after we'd got in the shop, 'Listen, if I told you about a game that if you were waiting for seven o'clock on a Sunday night for the pubs to open, and you was playing this game, you'd forget the pubs wasn't open and not worry about the time, what would you say?'

'There is Johnny. It's not really a game though - more like olden day warfare. It's called chess. And I'll teach you the moves if you want to learn.'"

Today's post dedicated to Allen "It's not a proper knighthood" Stanford who may yet have a good deal of time available to contemplate a chess conversion ala Healy.

It's not entirely clear to me why our American cousins consider an alleged $8 billion fraud to be more worthy of prosecution than the attempt to destroy cricket as we know it but still, it's better than nothing isn't it?

PS:
Filthy Onlooker
Posted by Jonathan B at 8:30 am

I'm thinking that for a Streatham and Brixton player, now there are *two* reasons to wait for the pub opening.

It's true us Yanks don't get cricket at all. On NPR the interviewer brought up cricket and described Stanford as a fan (something like that), which drew a rather lengthy explanation from the interviewee.