I still remember the first time I went to London, as a lad, to see a band: it was at the old Hammersmith Odeon. I can still remember the seat number on the ticket and everything: I can also, regrettably, recall that the band was Status Quo, my musical tastes having changed a little in the subsequent thirty years. (Perhaps more than the band themselves have changed. I was amused to note that their Wikipedia page uses the term "currently" in relation to the year 2008, which will surprise many of their fans....who may think we are still in 1975. Not that this site has any problem with nostalgia items.) They were probably on one of their innumerable farewell tours, even then, when I saw them back in February 1981.

For some reason this came to mind when it came to my attention that another old rocker will be starting a UK tour next week - beginning, coincidentally, thirty years to the day since I saw the Quo. Compère, acting in (as I understand it) a personal capacity, is the estimable CJ de Mooi, ECF President and star of Eggheads. It looks like both Nosher and CJ are branching out into exciting new directions, and we wish them well.

I notice that CJ is, in fact, revamping his website, and the new format, while attractive, doesn't, yet, have quite the detail of the old one, parts of which you can see below. (Click to enlarge.) 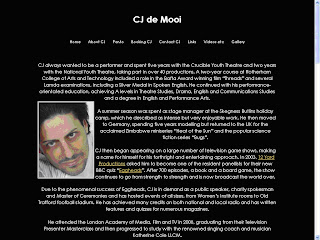 This is unfortunate, though no doubt it will be rectified soon, as it previously enabled us to read details of CJ's pre-Eggheads career, when he was a young actor with a role in Threads

and then, after a number of years in modelling:


"the acclaimed Zimbabwe miniseries Heat Of The Sun and the popular science fiction series Bugs".

It's a shame to lose this information, albeit only temporarily, since other sources seem to lack it: notably a resource I previously considered authoritative, the Internet Movie Database. Oddly, that site's records appear to be incomplete, since looking all the full cast and crew lists of the three shows listed - Threads, Bugs and Heat Of The Sun - I cannot find CJ listed.

Now obviously I'm aware that CJ de Mooi is not his birth name, and was apparently coined, by himself, "when he first reached adulthood":


he decided he wanted to make a name for himself, and he started by doing just that – literally. He made up the name Connagh-Joseph de Mooi, the last bit being Dutch for "the pretty one".

although he was still competing in quizzes as Joseph Connagh as late as 2000, after Heat of the Sun and Bugs (both unmentioned here). Still, no Joseph Connagh is mentioned in the cast lists either.

Never mind, one can use as many names as one likes - the present writer certainly has - and presumably, if we search for people who were involved in both Bugs and Heat Of The Sun, we will find CJ somewhere. Though I do not think that he is Hugh Bonneville, nor Flora Montgomery, and the other five people listed are not actors.

It's a mystery. But IMDB is not perfect: and if and when it is updated, then CJ's career as a television and even a film actor (as his Twitter bio used to say) 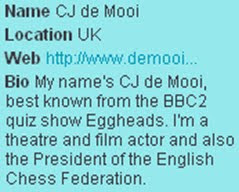 will, at last, be properly acknowledged.


[Thanks to Tom, Jonathan and Sean for various help with this]
[Nosher index]
[CJ index]
Posted by ejh at 7:55 am


A bland personality manager?
Is the agent one person or two - and is the 'K' for Keith (as in London Fields)?

Status Quo were 'rockin' in their early days.

God, not you too Chris. I thought you were more cultured.