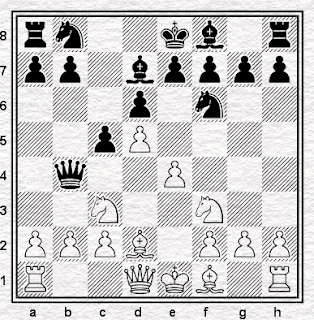 So, you've not been wondering, how did the simul go?

I actually won all my games except the one reproduced above, my opponent in that one being an oldish guy, not the strongest opponent I faced but good enough to win without difficulty once I'd gifted him both my centre pawns. I was probably lucky that I only lost the one, having found myself particularly struggling against two kids, both of them from a Bulgarian family (whether resident in Zaragoza, or on holiday, I didn't ask) and neither particularly pleased when I managed to turn the game around.

Another of their party made - unlike the gentleman who beat me - the mistake of playing a suspiciously coherent opening (1.d4 d5 2.Nf3 Nf6 3.c4 e6 4.Nc3 Be7 5.Bg5 O-O 6.e3 b6) thus inadvertently tipping me off that he knew what he was doing. I made good and sure to spend extra time at his board and won a hard-fought game. In some ways that was easier than another game in which I played against a child who, although she claimed otherwise, evidently didn't know how all the pieces moved.

I hadn't intended, in point of fact, to write about the simul, since I wasn't sure that I would have anything new to say. However, there was one thing which came out of the experience which I haven't seen written about at all. That thing was backache. A few hours after the simul I was walking around like a rather less agile Quasimodo, and I couldn't properly walk upright, for any length of time, until at least two days afterwards. 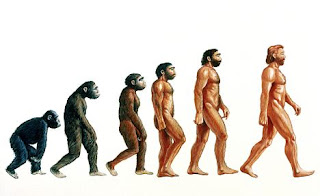 You're more likely to suffer from back trouble when you get older. I'd guess that a fair proportion of people who give simultaneous displayers are in that category, and hence a fair proportion of them must also be vulnerable to back trouble. So when you're playing in a simul, maybe have a thought for the poor bloke, if bloke it be, doing all the rushing around and bending over - and beating you, easily or otherwise. The pain you're feeling is purely metaphorical. And at least, when you walk home later, you'll be able to walk upright.

I wonder if there's a market for sushi conveyor belt simuls, with the master taken around on the carousel.

I smell an appearance on Dragons' Den TC