What Dadd Didn't Do

Richard Dadd (1817-1886), artist and eccentric chesser, did some strange things in his 69 years, as this series has recounted. He painted precociously, becoming a Royal Academician by the age of 20. He did a rather baffling chess picture, The Child's Problem, when he was 40 in 1857 - you can see it at Watercolour in Tate Britain. 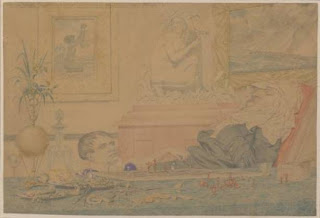 And when he was fancy free he sported a fez, perhaps a minority taste even then. If you get up close, you can spot his stand-out titfer in among the tumult of William Frith’s painting The Derby Day (1856-8, also in the Tate). Frith put him in the picture. Trust me.

He is picked out below in my own furtive snap at the Tate; he's just behind the chap in the green jacket (on the left in the main picture). 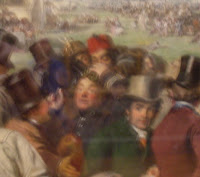 Yes, that’s Dadd, fezzing up at the back. Frith (1819-1909) and Dadd were close friends in an artists' sect calling itself "the Clique". Notice the date of The Derby Day - 1856/8 - with its mini-portrait, because Dadd was then already in Bethlem Asylum having, uncommonly, murdered his father in 1843. He spent the rest of his years inside (first Bethlem and, from 1864, Broadmoor). He carried on painting nonetheless, and evidently remained in Frith's affections, appearing as if a Joan for his Darby.
Dadd revealed an unusual take on chess to his Doctor, as we found out here. It was the Over The Board game that he most likely played. As far as is known Dadd didn’t do Correspondence. This is worth a mention because a few decades later, when Dadd was nearing his end in Broadmoor, there was a noteworthy correspondence game at Bethlem. In December 1883 to March 1884 some gentlemen from the Asylum took on Cambridge University Chess Club. And beat them.
I’ll repeat that: some patients from Bethlem Asylum beat Cambridge University at chess. The Cantabs playing white resigned, the exchange down, after 25 moves, in a pretty decent game by the inmates. The Cambridge team chucked in the towel, possibly a tad early, because an upcoming Universities match claimed their attention, or so it was said. Fortunately, and to spare their further embarrassment, they went on to pip Oxford that year 5.5 to 4.5.
Chess history buffs will know that the story was reported in full by Edward Winter in his Chess Notes number 1891. Initially it appeared in The Field of May 10th 1884. Here is the game:

You can see The Field's annotations to the game via the Edward Winter link above.
Mr. Winter’s Chess Note gives a list of possible Cambridge players. The Bethlem consultation team consisted of a “Beta” and possibly a “Mr. C.”
And who was “Beta” (that's a pun on "beater", don't you think)? They say that Hoffer, who first gave the story in The Field, knew but didn’t let on. But after your blogger recently drew the tale to the attention of the Bethlem Archive and Museum, Ms Sarah Chaney, doing research on admissions to Bethlem in the period, kindly checked her notes for references to patients who played chess in the 1880s. She wondered if “Beta” might have been….

“…..Walter Haigh, who was certainly at the asylum at this time. It's often commented that he plays chess, and Haigh also had a B.A. from Oxford, so was perhaps in a position to have had the contacts at Cambridge. He is also published during his time at Bethlem, so might be a likely person to submit the game for publication. The evidence is all circumstantial, of course, but I thought perhaps if his name [comes up] elsewhere it might suggest it was indeed him. There's no mention as to who he is playing chess with when in Bethlem, sadly.
Ref: Walter Abraham Haigh B.A., Tutor from Belsize Park, age 27,
19/10/1882 (discharged well, 18/07/1888) Male Casebook 1882, CB/120, p. 102”

Unfortunately, she was unable to trace whatever he is supposed to have published, and that includes a book; but in view of Sarah's comment: please could anyone out there shed any light on Walter Abraham Haigh B.A., occasional chess-player, born circa. 1855?
I should mention that Dr.Tim Harding counselled us that those chess noms de guerre usually followed the initial letter of the player’s surname. So, the Beta=Haigh hypothesis may be misplaced, but perhaps (if I had my way) only alphabetically.
Dadd, partial to a puzzle himself, would have enjoyed the mystery, and we'll return to The Child's Problem, the Big Daddy of them all, for further scrutiny next time.
Acknowledgments.
Thanks: again to Richard James, this time for the Cambridge/Bethlem tip; and again to Colin Gale, and to Sarah Chaney, at the Bethlem Archive and Museum (follow its blog); and to Dr Tim Harding for his help and advice.
What Dadd Did
What Dadd Did Next
What Dadd Did Later
Posted by Martin Smith at 8:00 am