When, why and how did chess clubs first start to appear outside ? Readers of the series Martin Smith and I wrote about Thomas Leeming’s paintings of the gentlemen of the Hereford chess club may recall our reflections on early provincial chess clubs in . We knew from an inscription on the back of one of Leeming’s pictures that the club was founded in 1812, and after some digging around in the ECF chess library at we concluded that the club was the second earliest reference we could find to a club outside of .

This sent me off on a trail to find out more about the earliest known provincial club, the Brasen Nose Chess Club, which was founded a couple of years before the Hereford club. Most, though not all, of its members were attached to the college we know these days as Brasenose.

I was able to track down, with some valuable assistance from chess historian Brian Denman, four printed sources of information about the club.There was a brief mention in Philip Sergeant’s 1934 chess history A Century of British Chess, another reference in an article by B Goulding Brown in the British Chess Magazine of October 1932, and two, more extensive, accounts of the club published in the 1890s by the Reverend William Tuckwell (1829-1919), the son of the club’s founder whose name was also William Tuckwell. 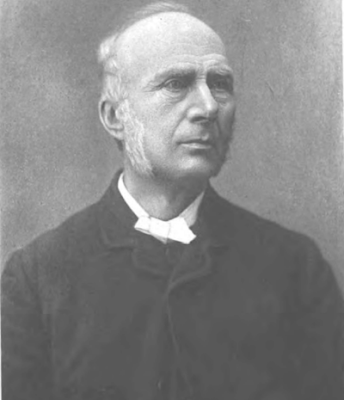 The Rev William Tuckwell,
chronicler of the Brasen Nose Chess Club, photographed in 1905.
Not to be confused with his dad of the same name who founded the club.

The Reverend Tuckwell merits his own Wikipedia entry, from which we learn that he liked to be thought of as a ‘radical parson’. He was known for his experiments in allotments and his advocacy of land nationalisation and the teaching of science in schools. He wrote about the Brasen Nose Chess Club first in an obscure publication called Our Memories: Shadows of Old Oxford published in 1891, then a few years later in his book Reminiscences of Oxford where he gives a quirkily charming, if not entirely reliable, account of the club and the people associated with it.

He describes the members as ‘delightful symposiasts, with their powdered hair and shirt-frills, their hessians or silk stockings, their sirloins and eighteenth-century port’. Lovely word that, ‘symposiasts’, but what does it mean? I think Tuckwell may not be using it in its current (if rarely used) meaning as a participant in a conference, but as a member of a drinking party – a now obsolete usage. Which is not to say that conference participants cannot be symposiasts in both senses of the word...

Tuckwell tells us much about the club, but what no-one seems to have investigated since his time is its actual minute book. Brian Denman tipped me off that this might still survive and an email to the Bodleian Library in quickly established that it does indeed reside in the library’s special collections section and can be examined, though you have to do some serious form-filling before they’ll let you near it.

Tuckwell himself had inherited the minute book, then passed it on to his pal Falconer Madan, a Bodleian librarian and Brasenose alumnus, with a request that it be preserved in the library’s collections. Madan was a strong chess player who, as his Wikipedia entry tells us, represented in matches against University during the 1870s. Madan’s chess papers are also held at the Bodleian. 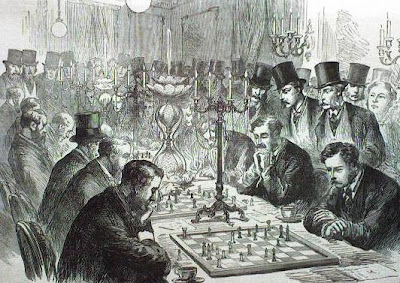 Falconer Madan was the Oxford board 4 in the first ever face-to-face match between Oxford and Cambridge universities in 1873 (previous matches had been by correspondence) - this picture appeared in the Illustrated London News.
According to one contemporary account, the match attracted upwards of 700 spectators. Tim Harding has written a fascinating account of the match here.

Earlier this year I visited the Bodleian to examine the minute book. My expectations were not high, as I had already been to the London Metropolitan Archives to look at the minute book of the London Chess Club, founded in 1807, which turned out to be a rather lifeless record of payments and not-very-interesting rules. But I was in for a surprise: the Brasen Nose ChessClub minute book is full of fascinating detail and tells an extraordinary story which has never been told in full.

Although William Tuckwell tells us much about the club’s brief life in his writings, he gave no explanation as to why the club had lasted for such a short time – it seems to have faded away after less than 18 months.

But now all can be revealed. Over the next five blogs, to be posted on the next five Saturdays, we will look at who the club members were, the fierce rules that were to be its undoing, the fallings-out, the grand dinner on the club’s first anniversary, and the ode to the goddess of chess, Caissa, specially composed for the occasion by the club’s poet laureate.

Yes, really, Brasen Nose Chess Club had its own poet laureate. Those were the days.

I have just come across a studio photo (younger than above) of the Rev Tuckwell in a very old family album - my Great-Great-Grandfather Harry Carveth was Head master of a Board School near Rugby and must have been a friend. I Googled the name and this article came up!

Thanks for your comment Christine. Maybe Harry Carveth and the Rev Tuckwell played chess together...