The Society Of The Spectator

[Note to readers: the site from which most of the following screenshots are taken has been taken down. A call to the Spectator Events office is rewarded with the information that the event has been cancelled due to lack of interest - ejh]

What are you doing at the weekend? Going to the ECF Council meeting, perhaps? Best of luck to you if you are, but if you feel the need for some R&R on the Sunday, why not go along to the Spectator Chess Festival?

You'll be in good company. By which I refer both to the agreeable persons with whom you will be spending your time, and the number of great historical figures, from Napoleon to Justin Bieber, that the Spectator promises us share your passion for chess.

Sorry, who was that last one again?

Ah. Sorry, I thought you meant Nabokov. Anyway, "Nabakov" and the rest "all love chess" and for this reason we are invited to spend a pleasant Sunday at the Royal Geographic Society for the very reasonable price of forty-nine notes, and while none of the aforementioned aficionados, alive or dead, are likely to be present, for another twenty quid you can play Ray in a simul.

As it happens I've done that already, so what else is on?

Top of the bill, so far as speakers are concerned, is Dominic Lawson

whose The Inner Game is by all accounts a very good book, though I've not seen it. Nor have I seen Kasparov Versus Korchnoi, of which he is apparently co-author. I wonder who with? 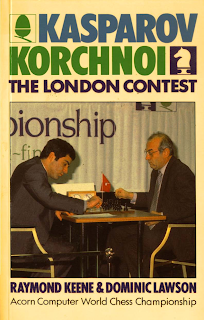 Mr Lawson, who is "an acknowledged expert", will be talking about The Beauty of Chess, and teaching us about "the cool side of the beautiful game". I always thought that was football.

Later in the afternoon, we have Malcolm Pein

who in forty-five minutes is going to explain "the strategies behind the popular Ruy Lopez opening" and conduct a Q&A session. Phew.

Also listed as a speaker, you-know-who

described, possibly by himself, as


one of the world's most influential figures in the chess universe.

I may have been too busy trying to get my head around that one to work out exactly what subject Ray is speaking on. Presumably it's not "writing chess obituaries", though since the subject comes up, I believe I am right in recalling that Dominic Lawson was editor of the Sunday Telegraph when the famous Nigel Short obituary of Tony Miles was published in that newspaper.

Talking of Nigel, what role is he playing in the event? As far as I am aware the answer is none whatsoever, and he is not billed by name on the website. Oddly though his photo does appear on the Agenda page

while on the Home page we have a photograph of the unmistakable Viktor Korchnoi.

Strangely Viktor doesn't seem to be listed as a participant either, and my own enquiries with the ticket office confirm that neither Short nor Korchnoi is taking part. Still, I'm sure nobody was given the misleading impression that they were taking part and that both gentlemen were happy to allow their images to be used to advertise the event.

Talking of advertising, I assume the Spectator will be advertising itself during the event, quite likely by handing out free back copies of the magazine. A good choice might be their issue of June 7, 2008, which included a interesting article by their chess correspondent, entitled Dumbing-down Time. As explained here, and illustrated here, a large section of this article was copied, directly, from Edward Winter.

Although the Spectator is well aware of this, it has never made any acknowledgement of this, let alone any apology. Nor do I imagine that it ever will.

I can't say I care much for the Spectator. There's all sorts of reasons for that, but one is that it's always struck me as the home (and the favoured reading) of a particular type who time and again gets away with what they should not, because of who they are and who their friends are.

Like for instance their chess correspondent. With whom more reputable journalists (and for that matter the ECF) should perhaps associate themselves a little less.