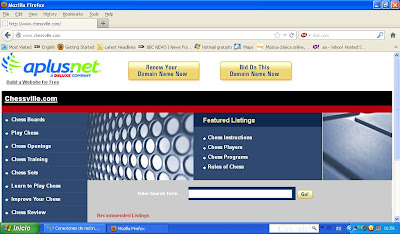 Here's a funny thing. A couple of weeks ago - specifically on Wednesday 23 January - we ran a piece piece demonstrating that a column that appeared on Chessville in 2007 was borrowed wholesale from an article in CHESS two years before. The author of that column was, of course, Ray Keene.

Not very long afterwards, it transpired that Chessville had subsequently gone offline. I don't know exactly when (I found out on Saturday 26) but it's been offline ever since and attempts to access the site obtain, instead, the screen displayed in our image above.

Most odd. Naturally one's first inclination is to see this as a question of cause and effect, but we shouldn't jump to conclusions. They've had server problems before now. So quite likely all that's happened is that somebody forgot to put a coin in the meter, or whatever the equivalent is when we are talking about websites.

One trusts this is so and that Chessville will be back before long. Whatever the immediate cause of their disappearance, there's no need to take down an entire website just because of one duff columnist.

But who knows? Chessville will either be back in the future, or they won't - and if they are, they'll either be back with Ray's columns, or without them. It may be presumptious of me to say so, but if Chessville do return to the land of the virtually living (which I hope they do) and propose to bring Ray's columns with them, they might like to check through them first, or get some kind of assurance from the author that everything that remains is in proper order.

Or both. I mean, where Ray's concerned you can't be too careful - what with, on Chessville alone, the piece currently under discussion, or the Guinness affair, or for that matter the strange case of the borrowed biography. (Or a stranger case still, of the illustrative game that never really took place. But we'll put that aside unless and until it reappears.)

Or, like I say, who knows? Anyway, we shall see. Either that, or we shan't.

The buzzards have been circling Chessville for several years already. The site is another victim of Chess.com's success and I doubt the S&B post had much to do with the latest disappearance. Chalk it up to a curious coincidence. You can find the site's pages in Archive.org. - Mark

The chesspub site has a comment by someone who seems "in the know".

"I do not have the perfect adjective to describe them"

I can describe some of them...