There's been chessboxing and we missed it? Damn. Must have been something else going on to distract us.

Fortunately not everybody overlooked the chessboxing 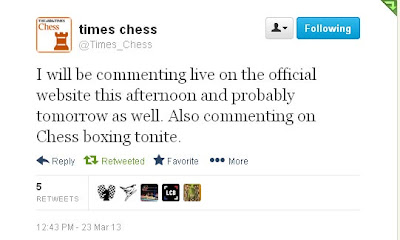 although poor old Ray seems to have been overlooked himself, since watching the live commentary on Saturday I was disappointed to see that the seat Ray should have occupied was taken instead by Robert Fontaine. No offence to M. Fontaine, but I was so looking forward to seeing how many mentions of his friends, his time as Viktor Korchnoi's second and indeed chessboxing Ray would be able to crowbar into his slot while commenting on Carlsen-Radjabov.

Ray has not been forthcoming about his failure to appear, so that will have to remain a mystery for now. But talking of changes in line-ups, there's quite a gap between the one that was promised on the Scala website

and the one that actually appeared on the night.

Of course the same thing can happen at the opera, but still - having only one of your four advertised names appear (or two if you count the Costello v Woolgar "exhibition match") might be counted pretty poor if anybody cared enough to count.

It's a statement of the bleedin' obvious that any show which involves the promoter taking on his mate is not a very serious one. However, rather less interesting than the question of which brawlers turned up on the night is the question of which journalistic innocents (or cynic) would turn up beforehand and recycle whatever tosh Tim Woolgar happened to tell them.

This time round it was Wired, who we last met in this blog only a fortnight ago recycling the half-a-billion-chess-players nonsense while chatting to Ray, Fred Friedel and the bloke from the Gospel According To St Matthew. The gospel according to Wired.com is that

Chess Boxing Demands a Rare Breed of Human: The ‘Nerdlete’

which neologism, one suspects, is not long for this world. Nevertheless it certainly is a rare breed of human that actually takes part, which is why it seems to be almost the same names every time Tim "The Spiv" Woolgar puts on a show. (Even if not the actual advertised names.) So rare they're positively endangered.

Perhaps I should say Tim "The Founder" Woolgar, as the piece, written by one Jakob Schiller, introduces him:


Tim Woolgar, the founder of London Chessboxing and the president of the World Chessboxing Association

though as we know, but Mr Schiller does not say, Tim Woolgar was appointed to that post by none other than Tim Woolgar.

Still, despite these nerdletes being a rare breed of human, the few - the very few - of them come from many walks of life.

[Woolgar] says there's also a carpenter, a nuclear submarine commander and plenty of people who are trained as boxers and mixed martial arts fighters.

Hang on, scroll back a moment. What did you say?

A nuclear submarine commander. I'll put that one down as "surely even they wouldn't make that up", though if it turns out to be somebody who, like me, once saw a submarine while on holiday in Scotland, who would really be surprised?

You know, you'd think a journalist, confronted with an intriguing claim like that, might respond "that's interesting, who are they, can I meet them?". I've enquired with Mr Steinberg to see if he asked. I am not hopeful of receiving a response.

So until we have a name and a few convincing details, then as always with chessboxing, it pays to be sceptical. You shouldn't always believe what everybody tells you.