When Bishops Are Too Strong 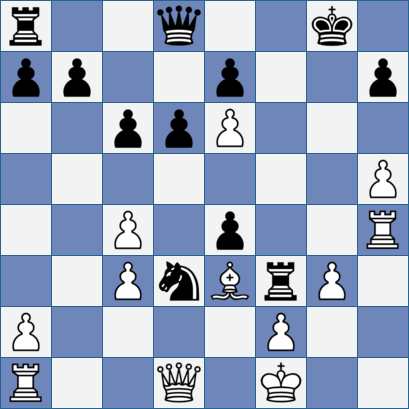 I didn’t plan it, but my year of ISEs has become rather Dutch themed. Last week’s exploration of Rxh5 in the Leningrad following on as it does from Feller-Williams, 2009 (SMA#26) at the beginning of the month. Mind you, see also the very first ISE (the famous Shirov-Bareev 1990 interzonal game), ISE V (Houska-Rendle, Sheffield 2011) and Ray Could Play VI as well for that matter.

A little curious it should work out this way. OK, I've played the Dutch for years, so it’s no surprise that a couple of exchange sacs crop up in A Collection of Dutch Bits and Bobs. Most of these others have been Leningrads, though, the only main line of the opening which I’ve never played in a serious game.

I suspect openings where one side - especially black  - has a fianchettoed bishop are disproportionately likely to generate exchange sacs. This one is slightly different one from the standard ... Bxa1 although presumably inspired by the disappearance of the piece on g7.

I could say more, but the TV programme from which the game comes is up on youtube. So over to Gazza and Spess. And You Know Who.


Speelman
Posted by Jonathan B at 8:00 am

I have a question.

Here's the background. I enjoy playing chess and reading about it, but I'm a pretty crappy player. So when I read one of these entries with the chessboard, I'll get the general point but I'll miss the tactical details even after staring at the diagram. For example, in the first image here I get that White can sacrifice the rook and then put Black's king in check, but it's not at all clear to me how White then takes the lead. Maybe d5, cos then if Black takes with the pawn, the black queen is screened off and then the quite queen can capture at f5? It's just too much for me to hold in my head. I think I could ultimately figure it out by pulling out a board and setting it up, but I'm too lazy. And in a game I'd just sort of wade in and hope that everything worked out.

Thanks in advance for answering. I was just curious. It's fun to read these posts, so maybe I should pull out a board and try to follow along.

Kind of depends on the strength of the player, Andrew, and there's ore than one aspect to the question anyway. Very very roughly, there's how accurately and confidently you can hold the position in your head a few moves down the line, and there's also how you evaluate whatever you position you reach - unless you actually arrive at mate or a decisive win of material you're gling to have to decide whether or not your attack is strong enough, and unless you're a computer program, that's a process requiring judgement. I guess part of the purpose of the series (not that I'm the author) is to show that stronger players come to such a conclusion much more often and much more confidently than do weaker ones.

For what it's worth, I can't say I can see through to a clear win, but I'm sure I'd play the sacrifice because it looks promising and moreover, what else are you going to do?

Many of the contributors to the comments on this blog play at least at the level of serious amateur. This means they are accustomed to being able to visualise positions following on from the current one as serious play doesn't allow you a spare board.

Seeing positions on a website isn't quite the same as over the board, but many years of working with computers or reading books and magazines means that visualising from a two dimensional standard diagram is just as easy.

One of the themes of the articles on Exchange sacrifices is whether you can play these as casually as you might exchange pawns. The one mentioned is a case in point, that chasing the King around is always likely to lead to a useful result, even if the detail needs to be worked out. The suggestion of d5 may be useful, but unlikely to be the immediate follow up as it doesn't demand an immediate response.

Thanks. I guess I'll just have to pull out the board for now until (if!) I ever get good enough to work things out without it.

There’s a bit of a follow-up to this discussion in today’s post - <a href="http://www.streathambrixtonchess.blogspot.co.uk/2014/03/back-in-ussr.html”>Back in the USSR</a>

Personally I always prefer to have a real set in front of me when I’m having a proper think. I’m guessing that the more people work with computers and engines the less they need an actual set in front of them, but I”m sure I do better with actual three dimensional pieces to look at.

Btw, as it happens White did play d4-d5 in the game that Andrew mentions (and later went on to win although I think that my poor defending had a lot to do with that).