Here's a Tweet I saw earlier this week, after Ray retweeted it. 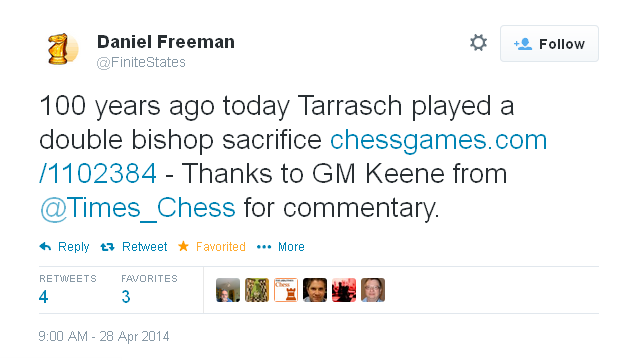 Daniel Freeman runs chessgames.com. So not unnaturally he wants to say thank you to Ray for some commentary Ray has provided for that site. And here is that very commentary. 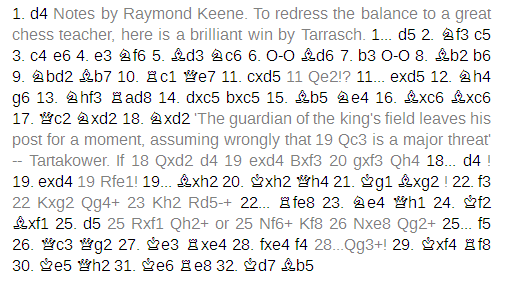 What's wrong with this?

I don't know about you, but when I clicked on the link in Mr Freeman's tweet, I wondered for a moment if he'd got the wrong game altogether: there's hardly any "commentary" at all. Just a few micro-variations, a rather curious introduction (to which we shall return) and a quote from Tartakower.

But no, play through the game and there's the double bishop sacrifice all right, we've got the right game. But what of the quote from Tartakower?

I didn't recognise it, but search for guardian of the king's field in Google and you find it's from Tartakower and du Mont. 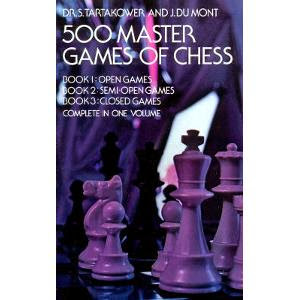 I don't have a copy of that book. (Well I have the third volume of the original set of three* but not the volume containing this game.) But I had a little look on Amazon and when I found the quote from Tartakower (not to mention du Mont)

I also found the variation which Ray had - apparently - added.

Odder still, all the lines given by Ray in what Mr Freeman calls his "commentary" are actually from Tartakower and du Mont.

So, contrary to Mr Freeman's claim - and indeed Ray's -

everything comes from Tartakower and du Mont. It's not Ray's commentary at all.

This being so, one assumes that the chessgames.com page will be amended to reflect the actual origin of the variations. Perhaps Mr Freeman will then Tweet once again to inform his followers that this has occurred.

That does leave one small mystery, which is Ray's opening comment.

Does this not strike the reader as strange? Indeed, did it not strike Daniel Freeman or anybody else at Chessgames.com as strange, when looking at the notes?

The obvious conclusion (though one that seems to have escaped Mr Freeman) would be that not only are the variations copied from somebody else, but the introductory comment is copied - rather carelesly and inappropriately, since in the present contest it makes no sense - from somewhere else as well.

But where? My immediate thought was Ray's Nimzowitsch book, but looking in my 1991 edition I couldn't find it (though the game is there, with all the variations pilfered from Tartakower and du Mont).

Don't worry: it's in the 1999 algebraic edition 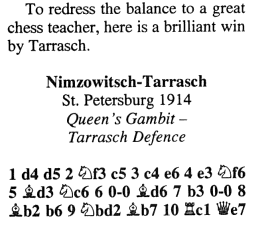 along with everything else. 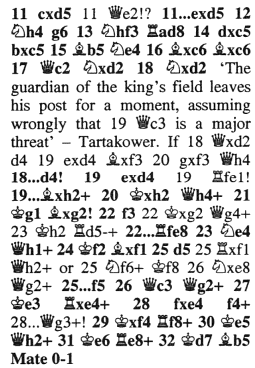 One trusts that the Chessgames.com entry will soon be amended to reflect this as well.

[* This isn't quite right: my volume is 100 Master Games Of Modern Chess (Bell, 1955). According to the Preface "this collection of games is intendded to link up with the present day the first two volumes published under the title of 500 Master Games of Chess".]
Posted by ejh at 7:55 am

By the way, if any reader has the first (1974) edition of Reappraisal I'd be vey interested to know if Tartakower and Du Mont's variations appear in Nimzowitsch-Tarrasch there as well.

The variations in the 1974 book are the same as in later editions, apart from being in Descriptive.

In the context of the first edition of the book, Keene was presenting the history of games with Tarrasch. In the absence of databases in 1974, the Tartakower and Du Mont book filled an equivalent niche. Tartakower was given credit for the words, if not the variations, which may in any event have been published before 500 Master Games.

Bell were also the publishers of the 1974 edition of "Reappraisal".

In its way, much of the material in the book is recycled as is almost admitted on the dust jacket. The point being that most of it was in obscure non-English magazines and publications, so the book was a compendium of material by and about Nimzowitsch.

Incidentally as far as giving credit for the words and not the variations is concerned, there was a similar (if more outrageous) example here. My comment then wsa "the inclusion of the quotation marks serves to give the impression that the rest is all original" and I think that applies here, too.

Although Mr Keene is a man of rhubarbian wit, his annotation is akin to the work of an inebriated whelk. Such preponderances should not be ignored. He had all the charm of a malnourished pigeon.

This reminds me of the time I was playing chess in the park. I had been eating a ham sandwich over the board and a few crumbs of bread had fallen on it.

I setup the board on the grass for a new game and walked away from it temporarily to get a drink. You'll never believe what happened next.

A crow flew down and landed near the board. It proceeded to walk onto the board and ate some of the crumbs of bread. The crow then seemed to look at the pieces for a moment and moved one of the pawns with its beak.

As I began walking back to the board, the crow flew away. I looked at the board and stood there in amazement.

The crow had moved the f-pawn from f2 to f4. It had played the Birds Openings!

(I've deleted a couple of comments left overnight on the grounds that I think they were intended for another thread.)