Nigel is not happy. 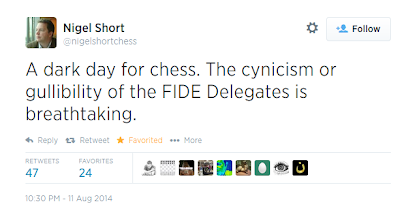 Maybe, Nigel, maybe, but who's this weighing in?

Now you may remember CJ in connection with an Olympiad. I do.

What money was that?

Now this may be water under the bridge to some extent, but since it's come up, here's a point to consider.

Suppose that a friend or associate of Kirsan - Makro, say, or Azmai, or Yazici - had touched a chess federation for his travel expenses to attend an event.

And suppose further that on arrival at the event he had promptly resigned, telling Twitter that he was taking a holiday. Without undertaking his duties and without repaying a penny of the money.

What do you reckon Nigel Short would have to say about that?

Much more, I think, than he's ever had to say about CJ de Mooi.

He's a funny guy, is Nigel. Spends most of his waking hours banging on about malpractice in FIDE like he was preaching the World of the Lord. But where his own federation, of which he's an elected official is concerned, he's suddenly a Trappist monk.

At least, when it's his mate.

Or, for that matter, his other mate.

Is that gullibility, or is it cynicism?