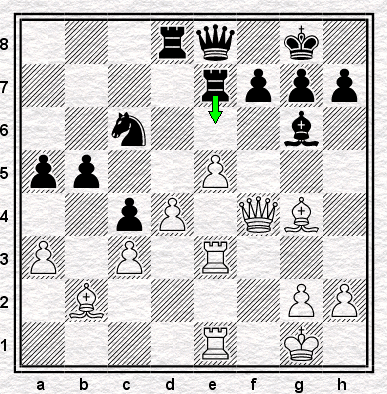 Black has a difficult position. White's centre pawns look ready to advance and sweep everything from their path, supported as they are by well posted pieces. Black's pieces are cramped on the back three rows. His main strength lies in the queenside pawns. For the moment the enemy centre pawns have a black square orientation which suggests that it would be well to blockade them by a knight on d5. But this post cannot be reached as the square e7 is occupied by a rook. Well then, give up the rook so that the knight can reach d5 and be supported by a pawn on e6.

I was musing about this series: there's something odd about the selection, and it's not just that the first nine moves selected were all played by Black. It may be, also, that only two of the moves have involved moving a piece into the opponent's half of the board. Or that only three, before this one, have been sacrifices.

This is a collection of favourite moves, not of "best" moves, and "favourite" need have no identifiable criteria. Even so, there may be some accounting for individual taste. So what is there in this, say, that appeals to me more than any number of famous mating attacks? Possibly I have a notion that attractive, dazzling even, though a mating attack may be, there is a kind of mystery only to be found elsewhere, in other aspects of the game. The attack may well be brilliant, but when one is attacking, one is looking for a mating attack - even if the actual means by which that mate is found is unexpected.

This move of Petrosian's is, at least, a sacrifice. But the most unexpected of sacrifices. The most counter-intuitive. Tony Miles is quoted as saying "the most important trait a player needs is a warped sense of humour", and while Petrosian might have claimed he found the rook move purely by applying logic - "iron logic", says Bronstein - and chess principles, I think it might take another human quality or two, above and beyond that, to find a move like this. One of which might be a sense of the perverse.

I mean surely it is White, not Black, who might be looking to sacrifice the exchange here? You would surely think that Black, already under pressure, can't afford to give White material as well, except in desperation. Yet a few moves after this bizarre, apparently passive move, the position was equal, the exchange was returned and a draw was agreed at the time control. 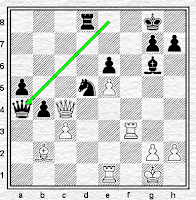 Moreover, as Crouch himself adds

...this should not be taken to imply that Petrosian's sacrifice was "unsound" or "psychological", since he would have been flattened if he had not given up the exchange.

I'd add that there are some sort of moves one finds because there is no alternative other than immediate defeat: but this was not so here. Other plausible moves existed. The astonishing thing is that Petrosian found this one plausible too. Kasparov's greatest moves, I could never hope to calculate. Petrosian's, though, I would never contemplate.

Petrosian considered it "a move so simple, there could be no doubt of its correctness". That translation, from Petrosian's Legacy, appears in Watson's Secrets Of Modern Chess Strategy: in Beliavsky and Mikhalchishin's Secrets Of Chess Intuition (translated by Gavin Lock) it is rendered rather differently: "as far as the idea is simple, it should also be correct". Whichever way you prefer it, it prompts the thought that this is what a genius is - someone who perceives something that is beyond the rest of us, and shows it to be simple. Gravity is a simple idea, simply explained, simply understood. But who, before Newton, perceived it?

There are some masterpieces which have been devalued by computers. This is not one of them. Even at 17-ply, my computer doesn't place the move in its top twenty. Perhaps it is, then, a move rooted in human perversity rather than sheer logic. Watson calls it a "creative sacrifice". He adds:

I don't believe this would have been played by another player in Petrosian's time, and probably by precious few today.

Nor by a computer - and surely nobody would play like this if they had not learned how to. From Petrosian.

Gravity is a simple idea, simply explained, simply understood. But who, before Newton, perceived it

One of my favourite Douglas Adams quotes is the passage in which a character dismisses Newton's discovery of gravity as nothing more than an "observation" but praises his invention of the cat flap as pure genius. The underlying point is the same though - something brought into reality that is instantly considered obvious and commonplace but nobody had previously thought of.

Which it was, of course