Chess in Art. It's happening for real. In Moscow. The World Championship match in an Art Gallery! Top marks to FIDE (and no quips about watching paint dry, please; game 3 was really quite interesting). But nul points for the infuriating commercial breaks in the live chess commentary. And anywhere else the art analysis would be treat. But not NOW! Not HERE!


Talking of galleries: I think I'm right in saying that none of the works in ejh's original Chess in Art sequence (which spawned these Postscripts) was on display, at the time, in a gallery near you. Not near me, anyway; which is the flimsy pretext for checking out a couple of bits of chess-art which are, by contrast, on display right now, and here, in London.

First let's go to one of our favourite public galleries, Tate Britain, which excels with three concurrent and absorbing exhibitions, two of which feature visitors to these shores. Picasso & Modern British Art demonstrates how, on his many trips to England, the great style-vaulting iconoclast influenced so many local artists; right up to and including David Hockney, who, following his recent Royal Academy blockbuster show has been elevated to the status of National Treasure. But, alas, there’s no chess here, even though Picasso did a chess painting in 1911 in his cubist phase. Dommage, but we’ll look at Les Échecs another time.

There’s no chess either in the psychogeographic collation, Patrick Keiller's The Robinson Institute installed with droll humour in the Duveen Gallery upstairs. There you may undertake your very own Debordian dérive, if you will. Self must be disengaged so that you may ruminate, dream-like, on the exhibits selected, cross-referenced and annotated by Keiller’s alter-ego, Robinson. Cruise so, in your reverie, and you'll eventually discover yourself again at Migrations, an exhibition that features work by artists who have found their way to our shores over the past four or five hundred years.

From the four corners they came to this green and pleasant land, and for all manner of reasons: patronage, fortune, asylum, study, survival, and occasionally to paint the scenery; and Migrations documents the consequential enrichment of this country’s culture - a by-product of our Imperialist past and post-colonial present.

The artist who produced Chessmen One (1961) is a case in point. 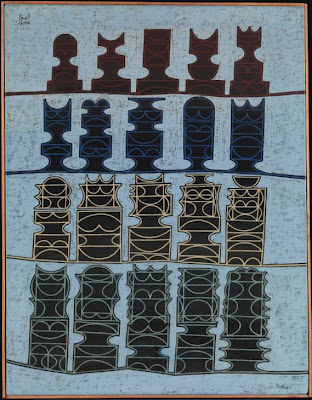 Chessmen One (1961)
Anwar Jalal Shemza (1929-1985)
Tate Gallery
Anwar Jalal Shemza was born in 1929 in the part of India that was to become Pakistan where, in progressive circles, he developed a presence as an artist and novelist. He came to London, and married an English woman; they tried Pakistan but, frustrated, came back to Blighty. They lived and worked in the Midlands and he died in Salford. That’s Migration indeed.

His cultural heritage, infused with the Islamic tradition of decorative (which is not, in this context trivial, or superfluous) calligraphy, is brought to bear on an array of ornate chessmen: “pieces” mostly, with maybe one pawn. They have a rhythmic and cumulative quality, as if the artist is exploring, register by register, musical chords, pushing to see how far he can press before complexity drowns out clarity.

Unfortunately, no other works from Shemza’s Chessmen series seem to be available on-line, but this work from 1959 looks like a precursor, starting with the white pieces on the black notes. 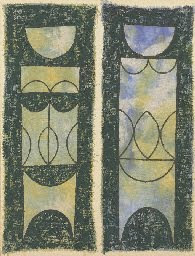 An essay (linked here) by Iftikhar Dadi (to which my comments on Shemza's biography are indebted), explores the term “calligraphic abstraction” applied to Shemza's style, and explains that in the late 50s he studied, and was influenced by, the work of Paul Klee; which connection provides a more substantial justification for this Postscript than we were able to offer at the top of this blog, namely that two Chess in Art works by Klee were featured in number XIV in ejh's series. They are worth looking at again and comparing with Anwar Jalal Shemza’s work. We have in fact reprised them before, and here is one of them again, waltzing before our eyes: 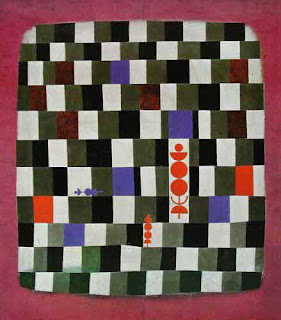 Paul Klee was a "Master" at the German Bauhaus which is now on show at the Barbican, and that’s where we can see some more chess-art. Actually, chess-design to be precise. From 1919 to 1933 the Bauhaus was a hothouse for cutting-edge art, craft and design. Form should follow function was their mission statement – and it has come down to us as part of our architectural-cum-design heritage, still influential today, not least because when the Nazis shut down the Bauhaus in 1933 as degenerate and left-wing many Bauhaus luminaries fled abroad, including to England. One or two of them pop up in Migrations back at Tate Britain.

Staying with Paul Klee for a moment: his work is nicely represented in the exhibition. As mentioned, we are familiar with Klee's cerebral form of pictorial whimsey, where he famously "takes a line for a walk" as if he, too, was partial to a psychogeographical ramble. But the phalanx of scary puppets he made for his kids was a new one on me. 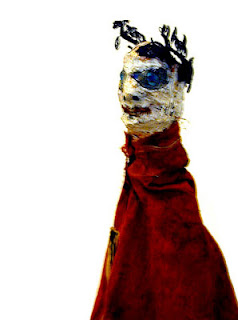 Paul Klee hand puppet (1916)
Klee Centre, Bern
Contrived from scraps of cloth and other detritus, and looking like the cast of a demented überGoth Punch and Judy show, they would surely have spooked his Kinder - enough to alert Social Services I'd have thought. They suggest a fault line in his character: the GrößMeister, apparently so benign, did indeed have a dark side, and feet of Klee.

What makes this exhibition particularly engaging is that it shows us what they got up to at the Bauhaus by way of extra-curricula activities, and it reveals that before the Nazis put the boot in the Bauhausistas had a whale of time. It wasn’t all earnest dialectics, axonometric projections, and D.I.Y. fabrication; it was also party, party, party! (And given the influence of the KPD, that might also be: Party!) And the more fancy the dress, the better! And the music! And the games! And, as if to fill a gap in their repertoire of divertissements, they designed, and made, their own chess sets. Design, Make, Play!

More than one chess set, in fact. This is Josef Hartwig’s 1922 creation – on show at the Barbican - though we are almost over-familiar with it by now. 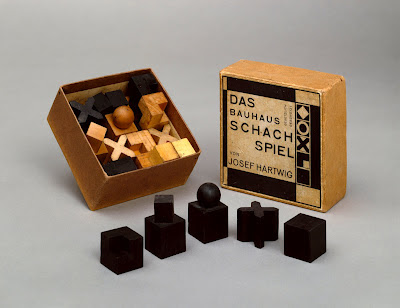 It's easy to see that the design of each piece embodies its move. This early version does so with squat economy, all the more to facilitate convenient storage. A later edition, below, asserts its functional form with sturdy hauteur – it stands proud, on a sympathetically crafted inlaid wooden board. 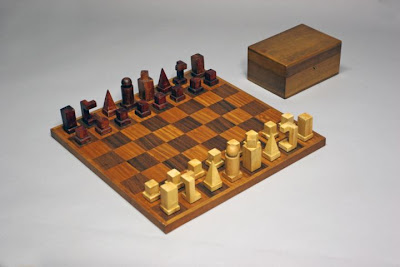 Bauhaus-Schachspiel (Modell XVI), 1924
As photography is verboten at the Barbican I found the picture above on the web. It looks the same as the set in the exhibition, although it appears to be labelled slightly differently. In truth the Bauhaus chess set has gone through many variations, both at the time, and subsequently in what should more accurately be called "Bauhaus-style" - enough to alert Trading Standards I'd have thought. In a way it's a tribute to the design's success: its Euclidean rigour makes it eternal, if rather straightforward to imitate. The version above, an original, looks simply beautiful and, compared with those fiddly Stauntons must be so much easier to clean.
Talking of chess art in the Capital, don't forget Eye To The Ground: now to 16 June (Wed-Sat 12 noon - 6 pm); here: R O O M Gallery, London . We blogged about it last Saturday.
Acknowledgments.
The Green Cardamom Gallery seems to be A. J. Shemza's principal representative.
Pic of Hartwig 1922 chess set comes from here
Pic of Bauhaus Modell XVI 1924 comes from here
Chess in Art Index
Posted by Martin Smith at 11:00 am