Today we undertake our opening examination of the Times obituary for the late Elaine Saunders, published on January 23 2012.

Let's start with what I suspect would be the part of the obituary that would most impress the average reader, which is the long section taken from the Australasian Chess Review of October 31 1938. 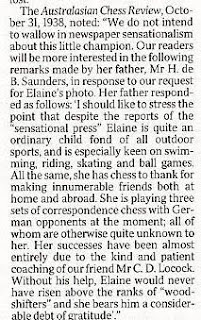 An old and obscure publication, published on the other side of the world and written long before most people reading the obituary were born. Whoever wrote the piece, one can imagine the reader thinking, they certainly know their stuff. They've done their research.

They certainly have, but how and where they have done it is a question that may interest the more sceptical mind. Where, for instance, might the obituarist have come across this apparently obscure journal from so long ago?

One possible source, probably almost unknown to the general public but not quite so unknown in the chess world, is Edward Winter's Chess Notes and in particular the item Chess Prodigies which, if one scrolls down, contains a section on Elaine Saunders, from which an excerpt is reproduced below.

Do click to enlarge. If you do, you may notice the similarity with the passage quoted in the obituary: to these eyes the only differences are the interpolation (in the obituary) of the phrase


Her father responded as follows:

and the omission of the sentence and a half reading as follows:


(whose Imagination in Chess you have reviewed in the ACR). Although a veteran, Mr Locock still finds time to visit girls' schools and teach chess; his service in this direction being entirely voluntary.

Other than that, the passages seem to me to be the same.

This raises a few questions, the most obvious of which is - where did the obituarist actually read the passage? In the original publication, i.e. the 1938 Australasian Chess Review, on Mr Winter's site (where it originally appeared in Chess Note 3817) or in some third, unidentified source?

The last of these options seems less than probable to me, since the passage does not seem to be reproduced in detail anywhere online except Mr Winter's site: for instance, if we Google the phrase


otherwise quite unknown to her

then all the references lead us to that site.

If it is not taken directly from the Australasian Chess Review, then Mr Winter's site is probably the source, and ought probably to have been cited, since it might be considered less than entirely proper to copy huge chunks off somebody else's website, even if it is a quotation from another source that one is copying.

But perhaps it was. Perhaps our obituarist went directly or indirectly to the Australasian Chess Review of October 31 1938, of which they no doubt have a copy. Perhaps they felt no need to mention the secondary source, or perhaps they did not even see it.

But is it really likely that somebody researching the life and career of Elaine Pritchard read the Australasian Chess Review for 1938, and yet somehow failed to read a much more recent, more detailed and more readily available piece? Is it really likely that they knew of the 1938 piece, without having seen it on Mr Winter's site first?

I do not think it is.

Is this orbituary any different from thousands of others in
(a) being unsigned
(b) not quoting every obscure website the writer might have used for research ?

Are writers of obituaries in national papers paid for their contributions?

They seem to be at the Telegraph, anonymous.

"Whoever wrote the piece, one can imagine the reader thinking, they certainly know their stuff."

Was it not the legendary Cecil John Seddon Purdy, first world correspondence chess champion. I think ACR morphed into Chess World.
Another obscurity: one Robert James Fischer had v. nice things to say about Purdy's ability to impart chess knowledge.

Inter alia I believe Purdy practically wrote FIDE's first rule book. He told me this once when he pulled it out of his pocket to claim a win against me on a technicality.