Enjoy a fine game and somebody else's notes 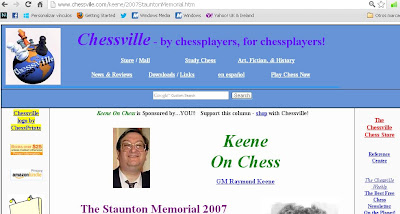 Readers of our 19 December column will have noticed a reference to a 2007 piece written by Ray Keene for Chessville, which annotated a game Levitt-Howell from 2005. These annotations, commented our writer,

are remarkably similar to those provided by Levitt in the original article that appeared in the November 2005 issue of CHESS.

Naturally, readers without easy access to that issue of CHESS may not have realised quite how "remarkably similar" Ray's notes were to the originals.

So, as a helpful service, we now reproduce the original piece from CHESS - and Ray's version in Chessville. We also reproduce an email which was sent on Tuesday 8 January to Ken Surratt, Managing Editor at Chessville. The email contains a list of the similarities between the two pieces.

I wonder if I could draw your attention to the disturbing similarity, recently discovered, between

(a) the notes to a game in a 2007 column for Chessville entitled The Staunton Memorial 2007 written by your columnist Ray Keene in his series Keene on Chess ; and

(b) the notes to the same game, written by Jon Levitt in a piece entitled A Bizarre Incident before the King Chase in the November 2005 edition of the British magazine CHESS.

I attach, with this email, a copy of Mr Levitt's piece for your information. [This was sent as an attachment - for readers' convenience we reproduce it below. Please click to enlarge - ejh.] 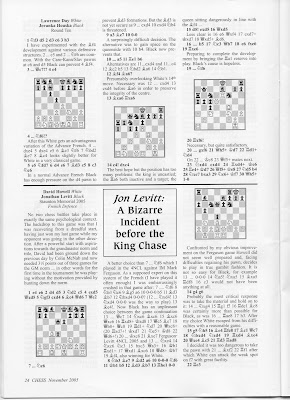 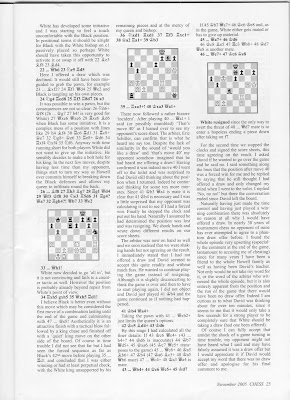 The game was played between David Howell and Mr Levitt in the Staunton Memorial tournament, in London, 2005: it appears in Chessville with light notes that are very obviously borrowed, without acknowledgement, from Mr Levitt's notes in CHESS. Almost every note by Mr Keene borrows terms and phrases directly from Mr Levitt. In more than one instance a note is copied almost exactly.

I list below the passages by Mr Levitt which have been borrowed, along with, for purposes of comparison, their echoes in Mr Keene's notes JL indicates Mr Levitt writing for CHESS: RK, Mr Keene for Chessville.

JL It would still have been misguided to grab the pawn....Black is tangling up his own pieces
RK This would be a bad moment to grab a pawn....Black has got his pieces rather tangled up.

It is obvious that the only way that such similar phraseology could have occurred in both pieces is if one of the writers had been copying the other. As Mr Keene's Chessville piece appeared almost two years after Mr Levitt's article in CHESS, there is no alternative but to conclude that Mr Keene was copying Mr Levitt.

We must also conclude that he was seeking to obscure the fact that he was copying. This can be seen in the omission of any reference to Mr Levitt, his article or the magazine in which it appeared, as well as in the fact that all the passages have been changed to some extent.

As you are surely aware, this is not the first time Mr Keene has been caught engaging in this practice - far from it - nor is it even the first time his Chessville columns have been involved.

I wonder if you have any explanation. I also wonder whether a persistent offender in this regard is a proper person to write for your site.

Looking forward to your reply

To date, despite a reminder sent the following week, we are still waiting for any explanation from Chessville for what, even by Ray's standards, appears to be a remarkably blatant instance of ripping-off.

Curiously, last time Ray was exposed as having plundered somebody else's writing for his Chessville column, they did at least respond and the column was altered, albeit imperfectly.

Perhaps they will still see fit to deal properly with this one. In the meantime, for ease of reading and comparison, we again reproduce in full, below, Ray's Chessville notes on Howell-Levitt. They're in nine separate sections and once again we recommend you click to enlarge. After that, we reproduce the CHESS original, once more for luck.

So look for yourselves and come to your own conclusions as to what has been going on here - and why Chessville might be reluctant to deal with it.

Nice to see that his behaviour hasn't changed.

Some people never change do they. McDonald's style commentary.

Chessville has apparently ceased to be.