In his Spectator column for 4 July 2009, entitled Triple Crown, Ray Keene annotated the second game of the 1954 World Championship match between Botvinnik and Smyslov. (You may recall that a game from their 1958 match, notes from which were twice plagiarised by Ray in the Times, was the subject of a column last month.) 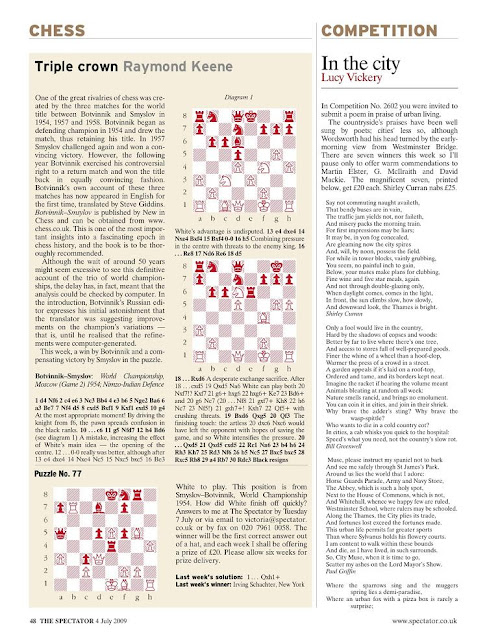 The introduction was devoted to discussing a new book on the three matches Botvinnik played against Smyslov, published by New In Chess and with notes translated into English by Ray's associate Steve Giddins.

The introduction is a little misleading, though, since the notes in the column come not from the New in Chess book but from Part II of My Great Predecessors. 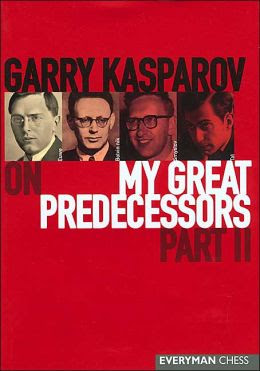 In that work, notes to the second game of the 1954 match appear on pages 220-222. They also, of course, appear in the Spectator column. They also appear in Ray's Times column for 25 February 2011 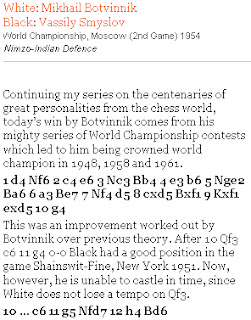 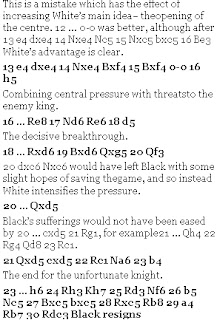 which is plagiarised from the same source. 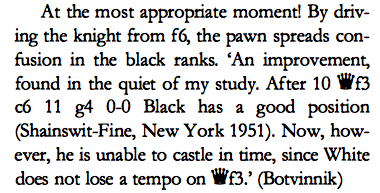 This time the Spectator also manages to appropriate, by which we mean plagiarise, Botvinnik as well as My Great Predecessors.

Menawhile in the Times, Ray mangles

A mistake, increasing the effect of black's main idea

so that it reads

instead. What is "increasing [an] idea"? Why bother changing what you plagiarise if it makes you look like an illiterate?

Nothing for the Spectator. Pity, there was a nice short note it could have plagiarised.

It's the last Spectator note, though there are two more in the Times. It's notable that 2009 is quite an early date for plagiarism in Ray's Spectator columns, though it was not of course the first time it had occurred. This was towards the end of Matthew d'Ancona's period as editor: the systematic, regular plagiarism appears to have taken place since.