Chess in Art Postscript: Now You See It, Now You

There's a lot of fantastic art on show in London at the moment; so, as ever, your intrepid chess-in-art blogger has been on the prowl for a nice chess pic or two. Topical, in more ways than one, is this little gouache, a recent work by your actual chess playing artist (and jazzer) Nette Robinson; you can snap up the original, or a print, on line, or at the London Chess Classic.

He bows his head as if to receive the crown. I like the off-centredness; not just the shift to the right and the crop, but the crooked inspection. At the risk of a lèse-majesté: it is typical of King Magnus's sometimes jejune bad-boy awkwardness (see also under G-Star Raw). It is not here but on the board that he displays his real-majesté, and his poise.

As for chess-art in the galleries, the Royal Academy was where my quest kicked off, not though with high hopes for the art of Australia expo in its principal exhibition space, and I say that with the greatest respect for our faithful readers down under (who clock up a welcome 1% of our page-views). My fears were justified. From the chess-art point of view it was, if I may put it like this: as dry as a dead dingo's donger. If there had been any it must've gone walkabout.

But, strewth, mates, no point in getting as cross as a frog in a sock (another little beaut of a trope from Oz, though this time rather unfortunate in view of what's upstairs at the RA, and it won't endear our antipodean friends to our French readers). Thus, the RA's other exhibition is Daumier, a Vision of Paris.

It is in the Sackler Wing, and this blog goes there next. Maybe there we'll have richer chess-art pickings; maybe even an old favourite from ejh's Chess in Art sequence of five years ago.

ejh included it in the grand finale to his series and it has appeared since on the blog - in our resumé of Yves Marek's historical survey Art, Échec et Mat. M. Marek argued that Daumier's was the first chess painting to capture the psychological dimension of the game, the tightrope walk swaying above the bottomless pit of possibilities.

As for the formal features of the composition, we see two figures locked in combat and yoked in a pictorial rhythm that sways in unison with the flow of the game. But they contrast in attitude: one cranes forward, enervated and alert, while the other slumps hunched and withdrawn; and in physique too: gaunt v rotund. And even in dress: white v black; or white and grey v black and red if we include their coiffure. So, as Daumier distinguishes the players, so they also express the colour of the pieces, and perhaps the state of the game. The players are not merely absorbed in it; they are absorbed by it. They are lost to the world.
I'd better mention, in case you'd thought of going to see it, that sadly The Chess Players is not in the RA exhibition. And that's a shame; but there are some other works on show (we come to them below) that are worth mentioning because they shed some light on it, albeit in a sidelong fashion. The rest of the exhibition is indeed worth a look.

M. Marek was right: Daumier's chess painting shows us the psychological struggle in which the two protagonists peer into the game; they are penetrating beyond the brute fact of the wooden board, and the pieces, to the meaning that they convey. The players do not merely look; with their discerning eye they also see. And this theme can be found in many of Daumier's works.

These two gents are also tied together in a common view, this time from the same side of the board (you might say); and they, like the chess players, are also light and dark (here, more for pictorial contrast than symbolic meaning). There's another similarity, too - revealed below in these two crops: 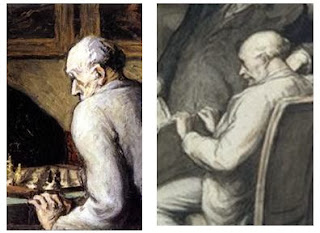 There's a hint of recycling, which is not so surprising when we are told that Daumier constructed his images from sketched notes and memory. He has tweaked his characters here and there, and though the physiognomy slips a bit, for social type they are two of a kind. But the attention to the detail of the grip is telling. On the left he holds on by a finger tip - it, and he, is on edge. On the right the grip is firm and all is well in hand.

Below Daumier pursues the same theme, throws in a cast of extras, and adds a dose of caricature (not to say satire) as he pokes fun at the pretentions of the soi-disant cognoscenti.

This gets us closer to Daumier the anti-establishment gadfly, the republican who earned a six month spell in the clink for his savage caricature (of 1831) of King Louis-Philippe as a pear-shaped Gargantua bloating himself on taxes extorted from his subjects. The exhibition also shows Daumier's sympathetic but unsentimental depictions of workers, men and women, burdened by their labours - he set a trend that others were to follow.

Yes, it's a shame his chess painting isn't on view at the RA; sadly you'll just have to spoil yourself and go to Paris to see it. But if you need consolation this side of the channel here's another of Nette Robinson's recent works - also viewable, and for sale, online and at the London Chess Classic.

The flat tonal simplification gives it a thoroughly contemporary LED look: legible, graphic, angular, geometric. The arc of black interlocks with grey and white to envelope the players. They have nowhere to hide. They are exposed against the pitiless backdrop. This is chess in the pressure cooker. My only misgiving is that no-one has lit the gas. Stop scribbling, Vlad. Get on with it, Vishy. Somebody, anybody, please make a move.

That's it. To finish on an upbeat note, why not practice some more of your Strine, i.e your Australian Questioning Intonation (you go up at the end...even when it's not a question)? Try it on this. Next week: more chess pictures that you can't (upspeak now) see. Bonzer.

Chess in Art Index
And Here's To You Mrs Robinson
Posted by Martin Smith at 11:00 am