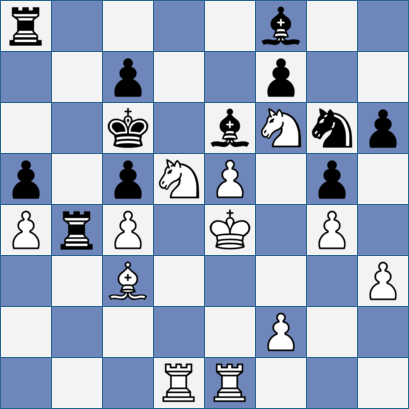 A correspondent - see the comments to Twofer - recently suggested that the ISE series has become 'more like stamp collecting than chess'. I have to say this is not at all an inaccurate or unreasonable position to take. Things are certainly rather different now than they were when we started back on January 15th.

I didn't intend it to become the sole aim, but one thing I did always want to do with these posts was to attempt to categorise the various kinds of exchange sacrifices that we find in chess. The fianchettoed bishop ISE, the Rook-Takes-Knight-on-Bishop-Three ISE, the Rook-Takes-Bishop-on-King-Three ISE ... etc etc. One sub-type that I was definitely planning to include at some point was the Deliberate-Attempt-to-Complicate ISE. An exchange sacrifice that might or might not be the best move, but which is played with the specific idea of generating unclear, even random, positions in the hope that the opponent will go astray.

Is that a fair label for Vishy's 27th move, yesterday? Or would a Not-Quite-as-Good-as-That-One-Alekhine-Did ISE* be more appropriate? Or, in the cold light of day, must we simply call it a Tossing-Away-a-World-Championship-Match kind of exchange sacrifice?

* More on That-One-That-Alekhine-Did next week.

Another way of looking at it, is that Carlsen had the strong threat of Nh5 followed by f4 as played in the game. As well as giving up material, .. Rb4 did little or nothing to directly counter this. The alternative of .. Rb3 created an indirect threat to the Bishop on c3, thereby making Nh5 more difficult to play.

In the Alekhine game and similar examples from Petrosian and others, the acceptor of the sacrifice didn't usually have anything immediately useful to do elsewhere on the board.

The game showed the power of a white squared King. You give up the Bishop, then exchange Queens, so the King is all you have left to move diagonally on white squares and control adjacent squares.

Not that I could understand what was going on after that, of course. I had no sense of whether Anand was doing the move out of desperation, or if it was a brilliant game-changer.

Quite right too. Rumours that Anand ISEd purely to appear in this series remain unconfirmed.

"Rumours that Anand ISEd purely to appear in this series remain unconfirmed."

I'll be honest, I thought of this blog at that moment, watching live. Whether the sacrifice works or not, it's a huge moment and certainly worthy of being included here :-)

I think having played the astonishing b5, he probably got excited and overrated his position. Thinking he must be better lead him to misevaluate the exchange sac. File under enthusiasm ? Tom.