This is not a folk song IV

This should hopefully be the last in our present series pertaining to the disastrous English Seniors Championship of 2014, the role of the English Chess Federation in dealing (or rather, not dealing) with the subsequent complaint and - in passing - the organisation's bizarre insistence on setting up an unwanted internet forum in order to try and close down an already-existing one.

But first, some satire.

You'll recall from last week that trying to trace decisions relating to the Sunningdale Park tournament, or for that matter the creation of the "official" forum, in the ECF Board minutes, has proven none too easy. You seek and you do not find. Both affairs are, however, mentioned in the report to the October 2014 Annual General Meeting of Angus French*, then a Non-Executive Director. 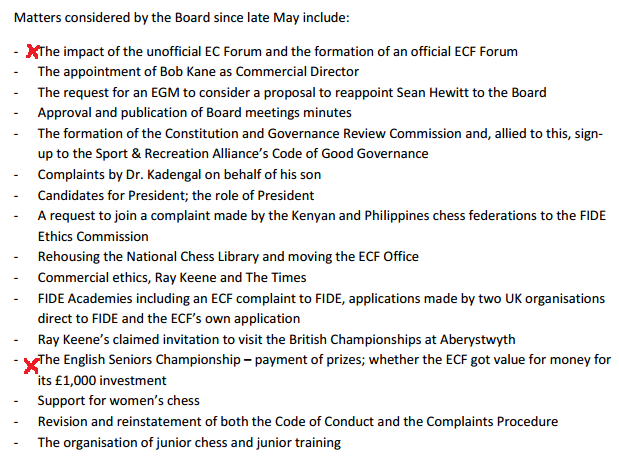 
Matters considered by the Board since late May.

This would, then, include the Board meetings of 28 May 2014, 12 June 2014, 15 July 2014 and 9 September 2014, four sets of minutes which say very little about "the impact of the unofficial EC Forum" and nothing about "the English Seniors Championship – payment of prizes; whether the ECF got value for money for its £1,000 investment". Nor do they say that anything has been redacted.

This doesn't say as much as it appears at first glance - like the minutes themselves, ho ho - since a lot of discussion between Board members takes place outside the formal monthly meetings, via email and phone and so on. Nevertheless one would expect these discussions (and certainly any decisions taken as a result of them) to be referred to in the Board meetings following, so it is noticeable that the Seniors controversy appears to be wholly absent while the forum gets only a bland mention or two in the minutes for 15 July. They're not short documents, these Board minutes: and yet it's striking how often when you go looking for something there, it's missing. One might conclude from this that too much of what is discussed by ECF representatives is discussed out of view of the people they represent.

as indeed it did in April

and again in September.

Here's a couple more of my questions to Phil Ehr from November 4, with his replies from January 7.


Was the organiser of the event a member of the ECF Board at the time of the award? Yes. The Board decided to proceed with e2e4. The organiser did not advocate for the award. The Board reviewed conflicts of interest and was satisfied.

Were any other members of the ECF Board involved with the event? Yes, two Board members helped organise the set of e2e4 events on the day, one event being the English Seniors Championship.

Perfectly reasonable answers too, these ones, though on reading the phrase The Board reviewed conflicts of interest and was satisfied it's hard not to ask "is that satisfaction recorded anywhere where we can see it?". But I guess we already know the answer to that one.

So everything was hunky dory - and then the event took place and hardly anybody took part in it and it was an embarrassment to the ECF and the embarrassment was compounded by a controversy relating to the amount of prize money awarded. (Or two controversies, really, if you take the reduced prize fund, and the amount of the ECF contribution to that fund, as two separate matters.)

Moreover, while this has been going on, the ECF Board has busied itself with such urgent items as creating its own unwanted discussion forum in order to communicate with members, while simultaneously demonstrating that they don't actually want to communicate with members unless it suits them. This is boneheaded, to pick one adjective from many. (It does also, in passing, demonstrate that if Phil Ehr doesn't answer questions, it's not because he hasn't got the time to do so.) 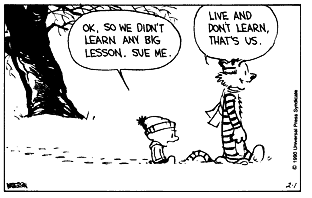 I believe I have borrowed this joke from Jonathan Rogers

Still, you've heard all this before and there's been more serious manifestations of all the bad organisational habits that we see on display here than the particular ones we've recently been discussing. How long before we're on to the next one? Not long, is the likely answer. Not long enough, would be a better one.

However, there is also this small financial mystery involved and I'm really not inclined to leave it as it is. Financial responsibility is important and when you are talking about the ECF making a cash award to a tournament which (at the time of the award) is run by a member of that Board, then you really need to see that everything has been properly accounted for. Such is not the case here and the person responsible for that is Phil Ehr.

So let's remind ourselves: I asked Phil Ehr the following question.

And yet "this amount" surely can't have been "paid out", because the prize fund was only £750.

So where did the rest of the money go?

[* Declaration of interest: Angus has been a good friend of mine for more than a decade.]
Posted by ejh at 7:55 am

So where did the rest of the money go?

The English Seniors was an event held alongside or as part of a larger Easter Congress containing a nine round Open and seven round Majors and Minors. You can only suppose that it was absorbed into the costs of the financing of the larger event.

That's the polite way of putting it.

Well it's maybe a plausible scenario, but I don't have any evidence for it, simply because I don't have any more evidence than Phil Ehr has provided. And as the evidence Phil Ehr has provided is misleading or wrong in one detail or another, but I don't know which, and as Phil Ehr must know what detail is misleading or wrong, but he can't be bothered to clear it up, then as it stand "I just don't know" is the only answer I can give.

Of course Phil Ehr could and should clear it up in a moment, instead of behaving as if contradictory financial statements were not important, as if questions about the matter were impertinent and as if ECF members had no need to ask about what's done with their subscriptions.