Who's Brigitta Sinka? I confess I'd never heard of her until, on my way home from holiday on Tuesday, I picked up a copy of MARCA, Spain's best-selling sports daily. To my surprise, the back page was full of chess, headed by a photo of the aforementioned Brigitta Sinka. 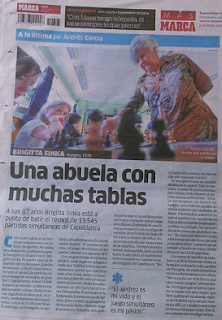 It transpires that Ms Sinka is hoping very shortly to overhaul the world record of 13545 games played in simultaneous displays, a record held by Capablanca, of whom I had previously heard.

This impresses the hellout of me, not leat because the one time I've given a simul, at which time I was approximately half the age Ms Sinka is now, I nearly died of backache.

So, best of luck to Ms Sinka in overhauling Capa's record. There was one odd thing, though, about the story, that puzzled me. What's this about?

I'd not heard of any Eastern Bloc boycott of any Olympiad as early as 1960, but what I don't know about chess history would fill many libraries, so I looked up the Women's Olympiad of 1960 (the open version was, of course, held in the Eastern Bloc) and I found, to my surprise, that there wasn't one.

The first five Women's Olympiads were in 1957, 1963, 1966, 1969 and 1972. On a first glance, this constitutes a three-year cycle from which 1960 is missing, which would suggest a cancelled event rather than just a boycott - perhaps, it occurred to me, a cancellation due to a boycott? Only problem is, there's nothing I can find that would suggest any such thing occurred, or that any event was even planned for 1960. It's a blank. No event, no boycott, no cancellation.

Now just because I can't find anything to back it up doesn't mean it isn't true, and if I had access to chess magazines for the relevant period no doubt they'd tell me what I want to know, but failing such access I asked the author of the piece if he knew what this was about.

Well the source is OK, but the information isn't - in fact it just muddies the water even further since although the author went on to say

there doesn't seem to be any plausible alternative date to which we could turn. When could "GDR competitors" have been "disqualified"? Not in 1963 or 1966, when they came third, or 1969 (sixth) or 1972 (seventh). And after that date - assuming there could be any confusion with events so far removed from 1960 - East Germany ceased to play in Olympiads for a number of years, which had no effect on Hungary's participation whatsoever: a Hungarian women's team has to my knowledge played in every Olympiad except Haifa in 1976, and that boycott had nothing to do with any disqualification of any East Germans.

Come to that, nor did a previous boycott, the one by Eastern Bloc nations of the Dubrovnik Olympiad in 1950. But that, too, had no relation to any actual or imaginary disqualification of East Germans. And it was a decade earlier. And it wasn't a Women's Olympiad.

Well, an 87-year-old grandmother on the cusp of a world record can surely be forgiven an imperfect memory. But what, I wonder is Ms Sinka thinking of?
Posted by ejh at 7:55 am

This is from Anne Sunnuck's The Encyclopaedia of Chess, p. 343: "An Olympiad due to be held in Emmen in 1961 had to be abandoned because the East German team was unable to obtain an entry visa, and F.I.D.E. rules lay down that an event cannot be held if political discrimination prevents a country from competing."

Thanks very much. That's very illuminating.

1961 - Building of the Berlin Wall , sanctions against the DDR?

It's funny though, you'd think there'd be something on this somewhere on the net, wouldn't you?

It is an old post, nevertheless: The east german Chess Player Wolfgang UHLMANN was denied in entering the Netherlands (zonal Tournament) in 1960 (!); therefore some more countries blocked this event and decided to withdraw. I did not found any Information WHY exactly Uhlmann was denied, but that has Nothing to do with the Berlin wall, as this Tournament was in 1960, berlin wall from 1961.