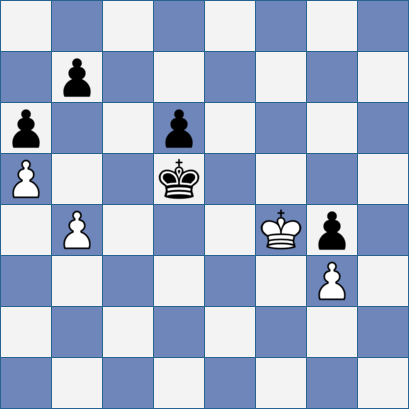 Not long until Sitges. In fact on this day in two weeks’ time I’ll be in Spain. Assuming, that is, I do in fact make it out of Stansted which is not exactly a given.

To be honest, I don’t feel prepared for this tournament. Not unprepared in a 'don’t know what openings to play' kind of a way. More, not ready in the same sense that you might not be entirely confident of finishing a marathon if your training programme had been six months of sitting on the sofa eating mini-cheddars.


One of the reasons I wanted to look at king and pawn endings this year was for the calculation practice. It hasn’t really worked out that way, though. Not since Easter anyway. For the last couple of months I’ve had neither the time nor the energy for the kind of coherent programme I had in mind back in January.

I am still looking at pawn endings, just not in a consistent or structured away. This position, 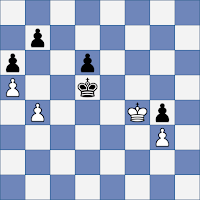 sent in by Jon Henderson (see comments box - JMBG) a few weeks ago, is one that I have managed to look at. Plenty of calculation here. Thanks Jon.

It's mostly technique, like always playing a move to seize the opposition. Later you have to have the white King on h5 when the pawn race starts so as to queen with check. But these positions where you win by a tempo can easily go wrong, or you think it's won, but there's a trick you've missed.

As a "Black to play and win" exercise, I found the answer immediately - force the king up to make sure Black queens with check. But in a game I'm pretty sure I'd have struggled to work it all out without knowing what the answer "should be".

Hmm actually I think you can still push the d-pawn one square and still get back after 3. Kh3. The line played is cleanest, but doesn't pretty much anything win?

The line played is cleanest, but doesn't pretty much anything win?

An engine seems to confirm that there is another paths to victory, namely the simple .. d5 instead of .. Kf3 in reply to Kh3. You have enough time to eat the g pawn and defend the d5 pawn. Judit's solution was elegant though. If you play through the earlier part of the game the K+P ending didn't occur by accident, rather it was the winning method to exploit more activity and a better Bishop.

As Matt F says, there seem many moves to win. It is perhaps quite nice though that there are three different ways to do it; queen with check, win the enemy pawn and set up an immediate queen win / exchange.

It has been brought to my attention that "Jon H" who originally posted the pawn ending to the King and Pawn Index comments is not in fact Jon Henderson as I’d assumed. Apologies to both Jon Hs and readers.