Jonathan was talking about Walter Browne on Monday. Ray's written about him a few times recently, including a Times column two weeks ago today.

It includes notes "based on", to use Ray's phrase, notes by Browne himself. 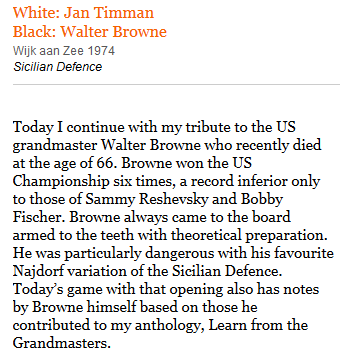 "Based on", they certainly are.

Especially if "based on" means "borrowing somebody else's text and changing round a few words here and there".

He does a lot of "based on", Ray. I'll get back to the subject in general in a future piece, but just for today, I wonder what kind of "tribute" it is that has as its fundamental point the employment of the notes of the deceased as a labour-saving device.

The answer is, of course, that's it's a very Ray Keene sort of tribute, since he did precisely the same thing when plagiarising notes - notes, as it happens, "based on those by Ian Wells" - for tribute pieces in CHESS and the Spectator in 1991.

Even without the outright plagiarism that he displayed on those occasions, this is a shoddy way, both journalistically and ethically, to proceed.

It's not the first time that he's misused notes from Learn from the Grandmasters, either - and no doubt there have been others - but to do so while purporting to celebrate someone's else's life in chess is in pretty poor taste. There's no good reason for it: if you think Browne's notes are so great, just say so, give them as they are and let them alone.

But don't use them as a draft version of a column, half-copied and half-changed, that you can't be bothered to write properly anyway. There's something about that which makes me feel queasy.

Good evening. I know you can write what you want, but why not cover the British, maybe in a quirky way, rather than pawn endings and bloody Mondo again.

Keene did the same on Monday with his tribute to Colin Crouch, changing a few words in his notes "based on" those in Modern Chess: Move by Move.