[Pawn endings will be back next week. In the meantime, here’s Martin with something more worthy of your attention - JMGB]


Well done again Paul McKeown for another splendid chess history session at the City Lit., back on 10th August: this time on the great London International Tournament of 1851. It was the second of what we hope (down here in London) will be a regular feature of the annual summer break in local league chess.

Paul didn't disappoint his audience of a dozen or so, comprising a fair cross-section of chess strength and acquaintance with ancient chess history, and including some familiar faces from last year when he talked about the de la Bourdonnais-McDonnell match of 1834. There were some familiar faces in the PowerPoint as well as he lightly reprised a few characters from mid-19th Century chess, before introducing us to some others involved in the first ever London Chess Classic.


As a result of Paul's informative exposition I admit to now having a soft spot for M. Pierre Charles Fournier de Saint-Amant (1800-72) - though he didn't compete in 1851.
G.H.Diggle is highly complimentary in his 1933 BCM article about Saint-Amant's game, this heir to the mantle of Philidor (1726-1795), and bearer of the torch of French chess. But in 1843 M. de Saint-Amant lost a match to Staunton, after which our Howard was fêted as unofficial World Champion, and the French flame never burnt as brightly again. What endeared Saint-Amant to me was his principled opposition to slavery when Governor of the French colony of Guiana (though it got him cashiered after just three years); that, and his exemplary conduct also as a purveyor of fine Bourdeaux wines, about which he penned a learned treatise. Cheers, Pierre!

But we digress...as Paul was obliged to do in response to the enthusiastic engagement of his audience. After extensive preliminaries we got to the tournament itself. It was held alongside the Great Exhibition of 1851 - the show-case for Queen Victoria's imperial realm. Prince Albert was the moving force behind the Crystal Palace extravaganza and the promotion of brand "Great Britain": it was regarded as a triumph. Howard Staunton ditto behind the Great London International Tournament, though unfortunately Anderssen (1818-1879), a foreign johnny, rained on his parade by running out winner. He was the strongest player in the world at the time, said Paul, and an Evan's Gambit theoretician, analysing it in depth like some modern GM.

Naturally, no talk that strays into Staunton territory (he lived in Streatham by the way, in his "country home" -  see here) can avoid speculation about why it is that he emerged from a blank historical record as if by immaculate conception in 1836. Had he adopted the Staunton name to cover his bigamous tracks? Had he really trod the boards acting Shakespearian roles as he claimed? Ever the self-publicist, he certainly also knew a thing or two about branding (himself). Much ink has been spilt elsewhere on Mr Staunton, and it's no surprise that Paul was unable to solve these mysteries for us.

It was good to hear again about Marmaduke Wyvill (1815-1896) who upheld the mother country's honour by coming second in the 1851 Classic. Paul mentioned his contrastingly lack-lustre performance on the floor of the House (he did service as MP for Richmond in Yorkshire); to which biographical tit-bit we can add his youthful shine for Florence Nightingale (he proposed), and reveal this photograph, possibly of Wyvill from the Florence Nightingale Museum in London that has been waiting patiently to emerge at a propitious Blog moment. "Possibly" because when I was there several years ago it was undocumented and unsourced. But it could plausibly be him.
Finally, from Staunton's Tournament book, reproduced below is the first Anderssen v Staunton game (still in the original descriptive notation, and quirky lay-out: to keep the period feel) which Paul demonstrated to end his excellent talk. He went through it in a kind of "How Good is Your Chess?" style, as we tried to guess the moves. I am pleased to say that it was an esteemed (and strong) colleague from Streatham and Brixton CC who correctly recommended 9. Q to K.R's 5th. - but then, he is inclined to play that in any position. Anderssen's conducts the attack in a surprising modern way - or should we say that how we do it these days is rather old-fashioned.

Thanks Paul: see you next year we hope: perhaps for the final unmasking of Howard Staunton Esq.. 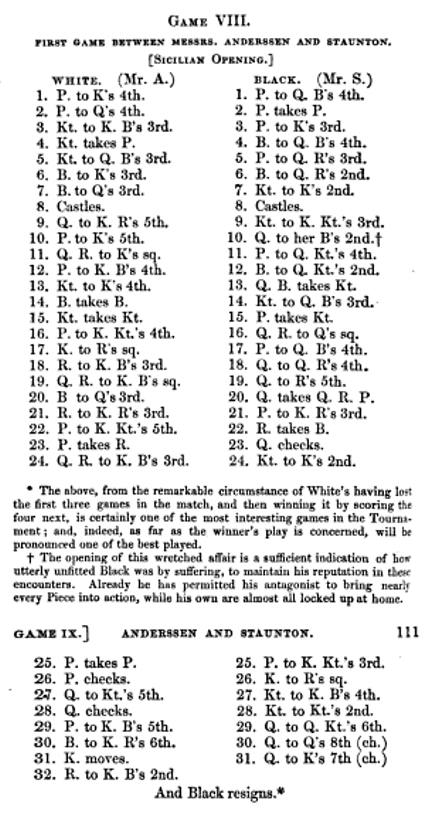