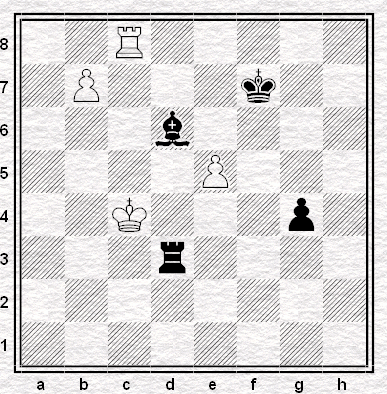 Schmid was now hovering with a White queen ready for the expected promotion of White's QNP. Korchnoi skittishly requested that he have a rook knight and bishop ready as well in case he decided to underpromote. Karpov took the hint and resigned to the accompaniment of loud cheers and clapping.

I do like that "skittishly". He might have been ripping off his colleague and employer in order to write an instant book

but at least back then he could write a sentence you'd remember.

I remembered it after this otherwise inconsequential game from Sitges. 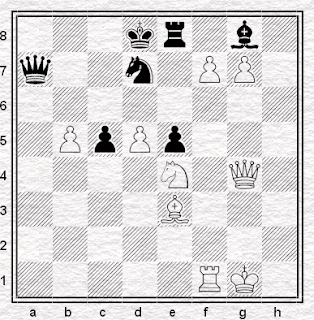 As you probably gather, Black's last move was one of very few options open to her, including 34...Bxf7 which allows mate in two, and Resigns. It's not particularly stronger than either of those.

Still, having expected either the game or the f-pawn to last no further, I found myself scrabbling about for something into which I could transform it. Unlike Viktor, I had no particular desire to showboat - I just wanted to put another queen on the board for half a move - but mine was still at the board, sitting on g4. I was at a very low board rather than one of the elevated ones which might get you an extra pair of queens at the outset, and I found myself unsure what I should actually do. There wasn't even one captured on an adjacent board which I could borrow for a few seconds. 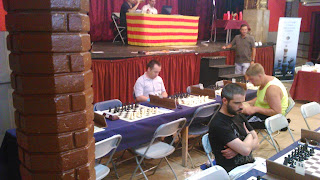 My opponent was sitting where Jonathan is sitting

so you had, in theory, reasonably easy access to them. As it happened one of them was already close by collecting scoresheets, so having raised my hand without attracting his attention I got up and tried to get into his sightline, but each time I moved one way he happened to move the other, a skill which I normally associate with cats when they're being photographed. 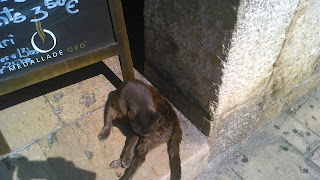 After a period of mutual twisting and turning I was relieved of my difficulty by the fact that my opponent, like Karpov, took the hint and resigned.

I had a few more minutes left than I usually have at move 34 - i.e. I still had a few minutes - so I'd not been particularly concerned about my clock, but it bothers me that I didn't really know what to do in that situation. I should have stopped the clock, shouldn't I?

It's funny, and not to my credit, but I didn't know. And funnier (and more discreditable) still - I'm not sure I'd have known how to stop the clock. How embarrassing. I've been using digital clocks with increment settings for about a decade now, but I'm not sure I've ever set one for the start of a game and I'm pretty sure I've not yet stopped one in the middle of a game either.

It was simpler in the old days. They had buttons at each side and one of them was yours. You knew where you were with a chess clock then. 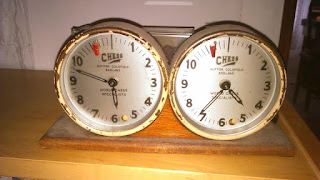 The traditional method of promotion in the absence of a spare queen was to use an upturned rook. Arbiters for some reason or just irrational prejudice have taken exception to that.

It's the button in the middle that starts and stops the clock. Mind you, stopping the clock is an accepted way of resigning, so you would have to be sure your opponent understood why the clocks were being stopped.

You can stop the clock if you call the arbiter too. That's the rule for repetition, reclamation, promotion and all the things that requires the intervention of an arbiter.

So, if you are at least a semi-pro player, the first thing you must do is to understand how to operate your clock. Ask an arbiter before the beginning of the first round (and ask, too, the time control, as they were incidents related to this specific point lately)

Maybe Keene could write, but did Korchnoi really say "rook knight and bishop"? Because underpromoting to a minor probably would not win, even assuming e5xd6 first.

There was an expert player here in the USA who was notorious for trying to promote all eight pawns to the same piece. Naturally he bypassed the arbiter and asked neighboring players directly if he could "borrow a knight" (or whatever). If you had any sense, you answered "no". Otherwise, you would have to wait around forever for the end of the game, to get your piece back.

Look again. If my unalzheimered memory is correct there was a misprint: "loud cheers and chapping". Very painful.

Heh, thanks for that. I'm several hundred miles away from my copy at the moment but I'll try and remember when I'm home next week.

Your memory is correct!