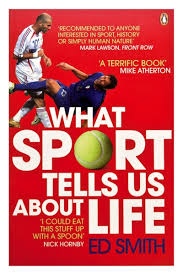 I re-read Ed Smith’s What Sport Tells Us About Life yesterday. Part of it, anyway. Specifically, chapter 10: When is Cheating Really Cheating?

I often find myself returning to this book. My inspiration this time was the brouhaha that blew up after Nakamura's double-handed castling in the Armageddon game with Nepomniachtchi at the weekend.

Nobody likes a cheat. Neither players nor spectators. Not in any sport. That’s how Smith begins, at least, and I think we’d all agree. Pretty quickly, though, he proceeds to drive a coach and horses through any certainty the reader might have had about what constitutes cheating.

Take what Smith has to say about cricket, his own sport, for example:-


The latter caused an international incident in 2005 when Pakistan were the equivalent of defaulted for not coming back out to play after they were penalised five runs for messing around with the ball during a test against England.

"Arguments about cheating in sport revolve around conventions more than laws. It’s not only a question of "Was he breaking the rules?’ but also 'Is that rule sacrosanct?' It is the unwritten constitution that exerts the stronger grip.

So what about Nakamura? Using both hands to castle is obviously against the rules, but is it cheating? Not really, I would say. It’s far too minor an infringement of the rules to deserve that label.  Or maybe I mean it’s an infringement of a minor rule.

Whatever. The principle that the punishment should be proportional to the offence dates back to the late 1700s and the 'Father of Criminology' Carlos Beccaria, if not further. Certainly, the post-hoc award of a win to Nepo on the grounds that Naka had used one hand more than usual to switch his king and rook would have been an absurd over-reaction.

While Nepomniachtchi’s appeal rightly failed, the very trivial nature of Nakamura’s actions make me think much less of him too. Double-handed castling is like littering. The impact on everybody else may be small, but it really isn’t difficult to keep within the norms of acceptable behaviour. Anybody who fails to do so is making a pretty clear statement about their priorities.

The same - and here I finally get around to why this post is included in the DG series - is true about claims regarding chess and dementia. It’s really not hard to avoid making vague unsubstantiated claims in this area. Not hard to avoid saying things like, "There are many studies showing positive effect of chess on delaying, improving dementia/Alzheimer's" (Doctor Garry is In) or any of the other equally dubious claims that have we’ve seen in these posts over the past 18 months or so. Not hard, that is, if you have even the slightest sense that what you might happen to feel like doing or saying right now does not necessarily trump the conventions by which everybody else lives.

Let’s not spread misleading or outright factually incorrect information about health matters. Let’s not use both hands when we castle. Let’s not drop litter. Whether or not it matters that much to anybody else if we do these things, let’s not be bellends. Let’s just not do any of them anyway.

Castling with both hands is necessarily equivalent to making your move and pressing the clock with different hands, which I would say is a pretty serious infringement in a blitz game. Not serious enough to be defaulted, of course, when it's only done once, but surely serious enough for some kind of action to be taken, and serious enough for it to play on the mind of the opponent when none is.

Where was the arbiter when this happened? Where was the referee when a footballer got slapped in the face? There seems to be an assumption that you have to make a claim but there is no point having rules unless you intend to enforce them. Perhaps chess players should learn to dive and wave an imaginary card.

It's only speculation, but my guess is that - assuming that they would have acted had they had the time - everybody was too surprised to act, it having happened very quickly.

There were four arbiters standing by the board; not sure if one was the Chief Arbiter, probably he was. Each one thinking it was the other guy's duty to intervene?
Fairest would have been to stop the game immediately, tell Nakamura off, start a new game with an extra 10 seconds for Nepo?

Today after he won, Nakamura was interviewed by New In Chess editor Dirk Jan ten Geuzendam. Who fell in my estimation when he failed to ask the American GM any question about this.

I didn't see the interview with ten Geuzendam but it was very strange when Nakamura was in the commentary box with Miroshnichenko - he seemed ready to take a question about it and even seemed to want to say something himself but Miro asked him something completely different, then later pushed him towards analysing the other games.

The start of the discussion is at around 3:45 in the official coverage of today's games (round 4 day 2):
Miro: "I do have one question about the Nepo match"
Naka: "Yeah, yeah of course" [laughs nervously]
M: "How do you manage to calm down,... when you lost 2 in a row?"

Then at 3:46 after a little discussion of the Nepo match in general:
Naka: "I do want to say one other thing though, of course - it relates to the match"
Miro: "If you don't mind"... - then turns to analysis of the Caruana - Mamedyarov game.

During the Stavanger tournament in June Dirk interviewed Silvio Danailov without asking him any questions at all relating to the corruption allegations being made against him, saying "we decided we are not going to touch on any chess politics" and "there are a lot of things going on that are way too complicated for us" (I am not making that up). This didn't surprise me one whit.

I understand (but don't condone) it if the interviewee doesn't want to be asked about it. But Naka clearly wanted to raise the issue and Miro shut him down - that doesn't make much sense to me.

After reading the above, I think I must have misremembered and it could well have been Miro' not DJTG who failed to ask the question. Apologies to him. They made sure to raise it with Giri today after his little hand-twitch penalty so evidently this was being discussed behind the scenes in Baku. Since Nakamura is still in the event, maybe he will get a chance to give his side of the story.

Yes there was quite a bit with Giri today - also about how terrible the event in Tromso was compared to Baku. That was a bit strange too as he went on about how the arbiters had warned him before the game about touching pieces - almost as if they'd set it up so that they could discuss a situation where the arbiters got it right?

Hmm, as far as I can tell, FIDE puts the chess/dementia "link" under its Social Action Commission, rather than the Medical one (maybe the latter would realize how dopey it is). Dr Elgendy of Egypt (an arbiter, seen in the Nakamura-Nepomniatchi kerfuffle) is probably the most qualified on SAC to say anything, but I suspect he again is just a chess promotor.

Reading it all more closely, I think FIDE (again) broke their own rules with this SAC.
The General Assembly in 2012 instituted these new Commissions (formerly Kirsan could insta-create one himself under Standing Order 8.1, like the infamous one on "Modernization", i.e. fast time controls suitable for television), and in Annex 10C there is a "Commission for Social Projects (SOC)" listed, but in the end this appears to be split into two, namely the "Social Projects Commission (SPC)" and the "Social Action Commission (SAC)". No explanation is ever given in the GA minutes, which just says the GA approved the new commissions.
But unless Nigel Short wants to drag FIDE up to the CAS over this, I can't imagine anyone would ever care (unlike the Anti-Cheating Committee/Commission, whose activity was recently curtailed by the Constitutional Commission until the next GA).

Eh, my bad. On page 40 of the minutes of the 2012 GA minutes, it is explained: Mr. Freeman said it was recommended that this is quite an important thing and we will create two Commissions and we will discuss soon to give them their proper names. One is with Mrs. Marinello, who will deal with social chess, women’s chess (and dementia - she mentions then-available research in Annex 72). The other one is with GM Lima, on prison’s chess, drugs and chess and chess for peace.