Who'd have thought it?

I've been trying to trace the origin of the 605 million chessplayers nonsense, recently regurgitated by Adam Palin in the Financial Times. Have a go yourself: you can Google search for useful terms such as 605, million and chess and see how you get on. Or try 600 since the 605 appears to be a cunning variant on a slightly older, equally specious claim.

Andrew Paulson started putting the more, ah, exact figure about in 2012 although his claim was that it was neither new, or his originally:


that 605 million number is actually the number that FIDE gave to the International Olympic Committee several years ago.

This claim is echoed in a 2013 piece in the Christian Science Monitor in which one Lisa Suhay writes:


The Chess in the Olympics Campaign says that there are at least 605 to 700 million people worldwide who play chess — that's more than the entire population of US, Russia, Mexico, and Japan combined, or 8.6 percent of all humans inhabiting the Earth.

You might think that the second part of the sentence would give you reason to be sceptical about the first part, but then again you might be a more sceptical individual than Ms Suhay, whose CV reveals her to have authored "an audio tape on the power of storytelling with Dr. Deepak Chopra". That's the Dr Deepak Chopra featured here and described here as a peddler of "scientifically-sounding psychobabble".

Still, the claim about 605 million players does indeed seem to derive from the Chess in the Olympics Campaign, which with the help of the Wayback Machine we can date back to April 2005.

That's the earliest I've so far found for 605 million. I'm guessing it's not the very first and that there must be documents, predating that webpage, from which the webpage took that figure.


How many people play chess in the world?


The World Chess Federation (FIDE) estimates that there are 600 million chess players in the world.

The quiz is dated to January 13, 2005. So one wonders where - and when - the 600 million figure comes from. As yet, I don't know. Earlier sightings would be welcomed. [EDIT: Matt Fletcher reminds my failing memory that we previously traced the 600 million figure to at least 2001 and "over half a billion" to FIDE in November 2000. Quite likely you can never be sure you have the original for such rounded numbers, though something as specific as 605 might be possible to pin down.]

But, you may have wondered, what of the 700 million number? You'll have seen in in Lisa Suhay's piece quoted above:


at least 605 to 700 million people worldwide who play chess

and you can also see it in this 2010 Huffington Post article by somebody called Claire Wasserman, apparently from "Chess-in-the-Schools", who tells us that

those "other statistics" being, surprisingly enough, unidentified.

Possibly they're related to the "official statistics" referred to by Andrei Filatov (mentioned by you-know-who, in this plagiarised column, where his "twin passions for chess and art" are lauded) only in July this year. Official statistics? Whose? Mr Filatov does not say.


there are now over 700 million chess players worldwide

which claim is attributed to - you'll never guess -

Good Lord. Susan Polgar? Who'd have thought it? Where could she have made such a claim? Not in this 2005 interview, in which she merely claims that


In Europe, there are over 30 countries that use it in the school curriculum

which, like all the claims in this piece, we should treat with scepticism. But where is our promised 700 million? Took me some time, but finally I located it on Polgar's blog, in an entry for 18 October 2005, and one which doesn't (for once) appear to be lifted from somebody else. 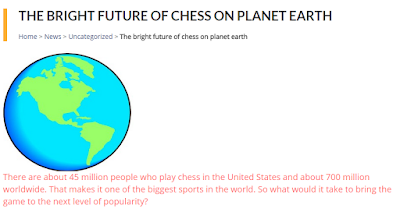 Where is the figure from? Well, in lieu of any more likely account, we can just assume that in 2005, a figure of 600 million was being put about, then 605 million - and Susan Polgar just added on ninety-five million or so. Quite modest by her standards, truth be told. Not that she does.

The origin is probably some flight of fantasy from Kirsan, like the aliens and becoming President of FIFA.

Objectively you can count players, at the risk of duplicates, by counting entries in rating systems. I doubt that's something FIDE or any one else has tried to do. You would include all the online servers naturally enough.

It's noticeable that what the 600 million is a count of, changes by who is claiming it. The more diluted the claim the nearer it becomes to plausibility. So if it's knowing the moves rather than playing, the count is obviously higher.

You aren't the only one expressing doubt over this claim.

Chess is life, so the real figure is somewhere north of 7 billion.

600 million? 700 million? Pah! FIDE President, Kirsan Ilyumzhinov, wants one billion within five to six years. Then "the critical world mass of smart people will proliferate and increase the likelihood that only the smart ones will be elected to parliaments, become mayors, presidents or kings. Only in this way, I am sure, the number of incorrect decisions will be reduced, and that life on our planet will be better and safer".

Should be any easy goal to attain. If you can pull 600 million out of a hat (to be polite), you can just as easily pull one billion out of the same hat. It suits most people involved in chess to use these figures, and most people outside of chess won't question them as they don't know enough about it.

Something similar happened with the recent rugby WC, when I heard that potentially 4 billion people would be following it. I suppose if you count all the people in the world with internet access (roughly 3 billion) and another billion who might be able to watch it on the telly, listen to it on the radio or at least get the result from TV/radio/newspaper, you might possibly arrive at a figure of 4 billion. After a while the 'potentially' part gets forgotten and only the '4 billion' sticks.

In all of these cases, the truth is one thing, doing whatever it takes to promote your activity by making it seem bigger than it is is another.

Did you get my link to The Hindu, yesterday, Mr. Horton?

Sorry Tchitcherine, your comment from yesterday got eaten by the spam filter.

Even though the article reads as if it could have been written yesterday, it dates back to 2001. Still it's an early sighting of the 600 million claim.

In my memory as well, it dates back to the era when every chess player was to be given a FIDE Visa card amongst other wild ideas at the time of the first shadowy figure persuaded by Kirsan to "buy" chess.

(The link is a Sam Sloan site but appears the only convenient archive of the proposals.)

Surely it's the earliest possible sighting. As you speculated earlier, Ilyumzhinov was the source, talking, as usual, out of the wrong end of his alimentary canal.

Popped up again in the Telegraph, linked by Cristian Chirila on uschess.org.
http://www.telegraph.co.uk/news/worldnews/northamerica/usa/11928084/Chess-gets-sexy-in-million-dollar-Las-Vegas-tournament.html

Thanks for that. Sadly typical of the Telegraph, one fears. It's surprising that the excellent Malcolm Pein doesn't jump ship....

Though not that surprising, given that he's not above repeating similar claims himself...

If you read section 5 (sponsorship of chess) in Merenzon's latest letter to FIDE, it notes that one of the problems in getting sponsorship is "Lack of verified numbers"...

It is in annex #54 of the Abu dhabi meeting.

On the other hand, here is a verified number (annex #49 of the same).

FIDE Online Arena has 4805 active members, of whom 2078 pay the subscription fee.

Ilyumzhinov writes a thankyou for his 20th anniversary wishes.

"As you know there are 186 members in our big family and more than 600 millions of chess fans."

He does say "more", but perhaps 5 million people left chess fandom due to the recent sanctions?

For his 20th anniversary, accomplishment #5 for Ilyumzhinov was this. Includes how to equivocate with statistics, and claims that the KO system allows more to be make their living from chess. Doesn't give figures for number of aliens that play chess.

In July 1995 there were 18162 FIDE rated players and in November 2015 the number reached 227751 players, thus, the number of active chess players increased more than 10 times in the last 20 years. In November 2015 there are 547747 registered players.
In 2010 the FIDE President announced his main target - to reach 1 billion people who can play chess. (According to a study of British company YouGov, more than 600 million people play chess in the World (March 2012)). Every year he visits many countries promoting the ‘Chess in Schools’ programme, inspiring people of all ages to play chess.
Since the FIDE President launched the knockout system a lot of players have been taking part in all knock out events during all these years. The new World Championship cycle system allowed many more chess players to make their living and benefit from chess. This was not possible before 1995, when only a dozen of top players were enjoying the advantages of elite players.

In his Chessdom interview, the 600 million number is magically applied to people "who understand the rules of chess" (not very impressive any more). The goal is one billion (not called "smart people" this time around).

- And what about you? You’ve got to think about yourself as well.

- I love what I do, and I don’t care how it affects my health or how much of my own money I have to spend on it. I’ve got no intention of taking a Rolls-Royce or Rolex to the grave with me. I want to leave a legacy behind. Right now, 600 million people across the globe understand the rules of chess. We want to make that figure one billion.

Georgios Makropoulos, deputy president of FIDE and the International Mind Sports Association, agrees: “We hope that this event in Beijing will be so important and so big that the IOC will understand that they need us.”