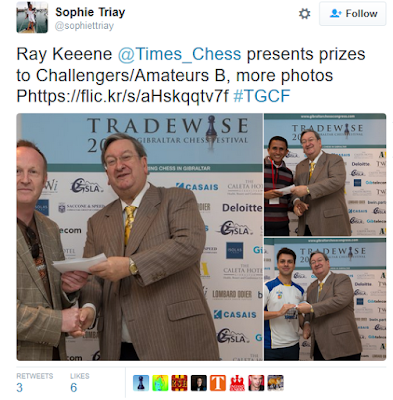 Naturally one hopes that everybody checked their envelopes carefully to make sure there wasn't five hundred quid missing, as is traditional with Ray and tournaments on the Mediterranean. More here for anyone who has the stomach for it.

Well I guess you're never too disreputable to give out the prizes at a chess tournament. And as I was saying just this past week...


there's always more than enough people in chess who don't give a damn ... if it's their mate involved.

And that's one of the most rancid features of the world of chess, the spectacle of Ray and his old mates forever promoting one another.

I can't say I was too impressed either with the following exchange:

That might even be true, you know. But knowing where to stop is kind of important, isn't it? Even in the cause of promoting chess. And a good place to stop is "short of associating with disreputable plagiarists and frauds".

Because they're not good people for chess to be associated with.

So while you can argue, if you like, about what "stimulating" means in Leontxo's reply:

Proper journalists don't go hanging around with plagiarists at all.

The major point of the post might be more evident if you reflect that Leontxo García is probably the best-known chess journalist in European newspapers. (Other than that I'm not saw I see your objection.)

No objection here. For me it is always interesting to see what the proven plagiarist is up to. Given the history of this and all his other sins against chess, it's important that someone highlights the instances where he's still "getting away with it". And interest is heightened when he's having a spat with someone as prominent as Garcia.

Did you interpret that as a spat, as such?

On first reading I thought Garcia was being sarcastic. But now I see how the tweets should better be interpreted as mutual sycophantic back-patting (which of course is consistent with their relationship, IIRC). The appropriate reaction to which would be, I think, "yuck".

The recently concluded Bunratty weekend Congress in Ireland invited him as well.

I suppose it's a way of getting publicity for your tournament in a national British newspaper.

Yeah, I think that's some old-mates arrangement, like most of what Ray does to be honest.