On Wednesday, we went through Ray's Spectator column of 14 April 2012, noting that it was plagiarised on a grand scale from Bill Hartston's notes in the old Batsford book Learn from The Grandmasters. 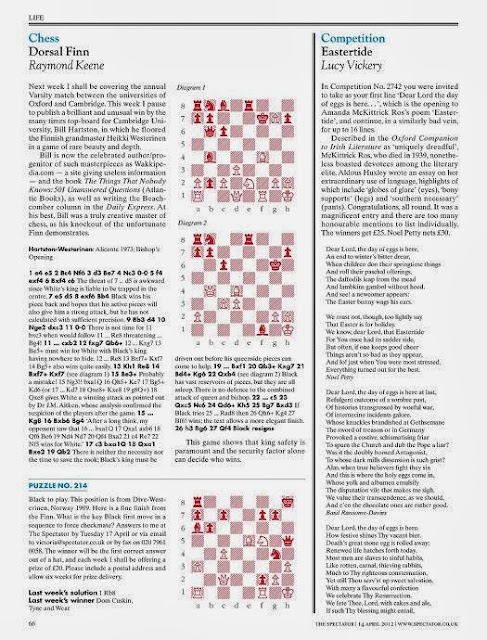 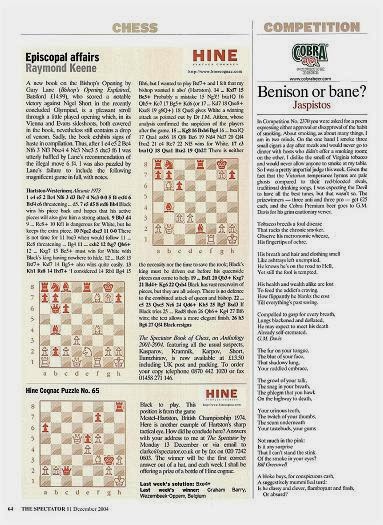 It's possible that the image is a little too small for this to be clear to the casual reader. So we'll look at the notes individually in a larger size.

There's a number of notes (the bulk of them, in fact) which are to all intents and purposes identical, in the 2004 column, to those which would appear - and which we saw on Wednesday - in the 2012 version.

You can of course check Wednesday's piece to see that both these sets of notes are plagiarised from Hartston.

There's also one note (to Black's eighth) where the 2004 version

includes every word of the 2012 version, but is shorter.

this does at least tell us that 2012 wasn't simply copied from 2004: whoever wrote the 2012 column (and of course the 2004 effort) must have had Learn From The Grandmasters in front of them.

However, the 2012 column wasn't written without seeing the 2004 column too, as we'll see after we've looked at the note to Black's sixth, severely truncated in 2004

but in 2012 plagiarised almost exactly

- and the note to Black's ninth, which didn't appear at all in 2012, but in 2004 was plagiarised word-for-word from Hartston.

As it goes, the note to White's fourteenth didn't appear in 2012 either. It did appear eight years previously, and what appeared is of no little interest in tracing the particular way these plagiarisms have been carried out and disguised.

which as you see is afforded quotation marks and attributed to Hartston, quite rightly so since it does in fact quote Hartston and do so exactly.

However, as with the 2012 version, the effect of adding quotation marks - when it's only one of a sizeable number of notes which are in fact taken directly from Hartston - is not to weaken a charge of plagiarism but to strengthen it, since the intention is manifestly to give the false impression that the other notes are original. It's no less plagiarism in 2004 than in 2012, even if, unlike the later piece, the author of the quotation is given.

But let's have another look at the note which, in the 2012 piece, was marked as a quotation.

I can think of no reason other than that the note to White's fourteenth, the token quotation in 2004, wasn't to be used in the 2012 column. So the quotation, as it were, moved. The attribution to Hartston was omitted, but a different passage, out of the many copied, was selected as Ray's token gesture to acknowledgement. His token fig-leaf.

It changes little: indeed it changes nothing. In each case, the notes were deliberately copied out from Hartston's and passed off as Ray's, which is to say that they were plagiarised. The reader in 2012 would have no idea that the notes had previously appeared in 2004: and in neither instance would the reader have any idea that any notes save one were Hartston's.

Nor is the source of the notes mentioned - a rare case of Ray failing to publicise his own book, but a revealing one, since he could scarcely do so without giving away that the notes were not in fact his.

What to make of the introduction to the column, I have no idea.

Baffling indeed. But there's nothing much else that's baffling about what occurred in these two Spectator columns (and many others). Plagiarism, on both occasions.

We have Ray producing a column in 2012 that was practically the same as one he'd produced eight years earlier - which is not as bad as the double plagiarism, but is no better than pathetic.

But at least, Ray being the editor of the book, surely the notes were at least his to reproduce?

Alas, apparently not. Here's the copyright note from the second edition.

No mention of this in the piece, either. Presumably Ray had purchased the copyright, yes? Or was this copyright theft too?

But I don't suppose they will.


[Thanks to Pablo Byrne and John Cox]