Here's a load of old tosh (or most of it) from the Standard last week. It's about chessboxing. Chessboxing and the Standard - what chance does that give us? 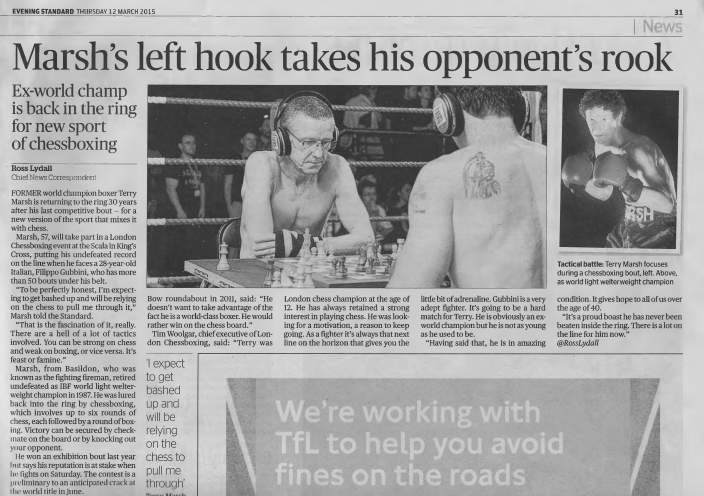 This time Ross Lydall is the hack charged with the job of recycling whatever Tim Woolgar tells him, starting with the usual stuff about it being a new sport. 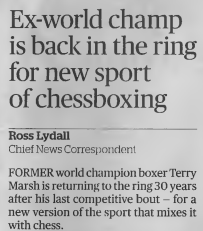 There's not much that's new about chessboxing these days and Lydall's article certainly isn't it. Well, perhaps it has something new to it, since it suggests that Marsh, by taking part in a chessboxing bout, is fighting to defend his unbeaten record in boxing.

What's that? A couple of paragraphs ago chessboxing was a new sport, yes? So an unbeaten record in one sport can be lost or defended in another?

Still, according to the clowns at the chessboxing circus, winning the bout made Marsh "undefeated world champion"

so there you go.

Marsh won, if anybody can really be said to "win" in a freak show, in nine rounds.That's not important, of course. What's important is that if somebody aged fifty-seven, who hasn't been inside a ring in around thirty years, fights again, then that's a freak show. If somebody aged fifty-seven steps into a ring and straight into a world title eliminator

Meanwhile, to go with our query about Tony Buzan last Wednesday, here's one about Marsh. When Tim Woolgar, upon whose word I would not stake my life savings, makes the following claim -

- that "Terry was London chess champion at the age of 12", what is he referring to and what is the truth of the claim?


[Thanks to Martin Smith and Angus French]
[Chessboxing index]
Posted by ejh at 7:55 am

Someone aged 57 would have been 12 in around 1970. The London Junior Championships of that era were events of sufficient magnitude that the winners were reported in the BCM. So the events in December 1968, 1969 and 1970 are reported on pages 52,66 and 62 in the following year's BCM. Some familiar names among the winners, but no one by the name of Marsh. The 1969 under 12 was won by Ray Keene's future brother in law and IM, David Goodman, which shows the standard needed to win. When the headcount was reported, the under 12 is reported has having just over one hundred entries.

The wiki article on Terry Marsh claims that he was a "junior chess champion". Such claims are often true, at school level for example, but of little value unless they say of what.

You are correct: David Levy was RDK’s brother-in-law.

However, I believe RdC is also right and that David Goodman is Ray’s brother-in-law too.

Ray's wife Annette is David Goodman's sister. They met when Ray visited the Goodman residence in Acton to give lessons to David. Ray's sister Jacqueline married David Levy in 1973 and Richard Eales in 1992.

My guess is that Terry Marsh won the London Primary Schools Championship but I've never been able to confirm this. He certainly never won anything at the London Junior Championships.

I happened to click on the Chess News section on FIDE.com recently, and amongst a large list of Seminars for arbiters, the last one was "Chess and Archery Challenge".

Supposedly this happened in Hastings on Nov 3, "This unique sporting fixture was to celebrate two sports which are closely associated with Hastings. Archery since 1066 and Chess since 1895."

Says Stewart Reuben: "This was one of my zanier ideas to promote chess. But less dangerous than chessboxing. There was never a danger of an arrow striking a human target."

As for the publicity: "Everybody was talking about when they would play again, even those archers who didn’t know how the pieces moved, nor even their names. There was much puzzlement as to why the symbol for a knight is N. We were asked, ‘Why the name rook, when it is obviously a castle?’"

Just in from Chess News Russia.

On this Sunday (Dec 6), the first Moscow championship of chessboxing will occur in Сокольники (Sokolniki) sports complex.

It's so popular, I can't even get info on the participants. Hope it's not a random choice from the audience? :-P

Back in your UK, there was a "blood and sweat equity" campaign announced last month.

Dear Puggy, looks like xkcd got to the chess and competitive eating angle first. Kobayashi once went up against a bear (no joke), but they have Carlsen losing to Secretariat in hot dog eating.