The Yiddish Policemen's Union I In the most recent issue of the London Review of Books is a review, by Adam Thirlwell, of Michael Chabon's novel, The Yiddish Policemen's Union. I've not read it! I've just read the review - the LRB is something of a labour-saving device in that respect - and I was struck, as any chessplayer would be, by the appearance of a certain name at the foot of the first column. (That's in the print edition: the review online is only available to subscribers.) The novel concerns an alternate reality in which Israel was not established: "three million Jews (writes Thirlwell - ejh) were got out of Europe in time to escape the Nazis and are now living in the Federal District of Sitka, in Alaska".

The central character is one Meyer Landsman, a detective: the novel begins with the discovery of a body. "In a room in the Hotel Zamenhof, where Landsman is living, a man who called himself Emanuel Lasker is found murdered."

It's possible that, in the novel, Chabon directly or indirectly tells us. Thirlwell - somewhat to my surprise - does not. He proceeds to tell us that the dead man's real name was Mendel Shpilman, and givs us plenty of reasons, which I'll not go into here, to appreciate why Shpilman preferred to hide his true identity - but not why he should go by the name of a world chess champion.

This, perhaps inadvertently, raises an interesting point. If you were going to choose a pseudonym, you'd normally prefer to choose a fairly anonymous, inconspicuous one. Perhaps Emanuel Lasker may seem to be one, but given, as I say, that the name would immediately attract the attention of any chessplayer, it's not reliably inconspicuous. Certainly the name wasn't accidentally chosen by the author, since later in the review, chess is shown to play a role in the novel and an apparently important part in Shpliman's life. Certainly, an extremely important role in his death. I quote Thirlwell's longish paragraph in full:

The night Mendel Shpilman was murdered, he had been playing chess: "It looks like he had a game going, a messy-looking middle game with Black's king under attack at the centre of the board and White having the advantage of a couple of pieces." But Shpilman does not have a game going: he has been setting a chess problem for the man who will soon murder him. It is the problem Nabokov includes in Speak, Memory (my link - ejh) in which he describes "one particular problem I had been trying to compose for months...It was meant for the delectation of the very expert solver". When Chabon's murderer is unmasked, he says that Shpilman intended the problem as a way of understanding how he felt: trapped in a zugzwang, when the player has to move, but there are no good moves left. According to Nabokov, however, the problem has two further meanings. And these encode the meaning of Chabon's novel. The answer to the chess problem, Nabokov writes, is obvious... But the sophisticated person will not notice this immediately, and will instead go through an 'inferno' of avant-garde moves before finally seeing the simple, homely move that is the problem’s solution, "as somebody on a wild goose chase might go from Albany to New York by way of Vancouver, Eurasia and the Azores". For Nabokov, therefore, the problem is first of all emblematic of the roundabout pleasure of art, the pleasure of plot. But it is also an emblem of exile: "The season was May – mid-May, 1940," Nabokov writes. "The day before, after months of soliciting and cursing, the emetic of a bribe had been administered to the right rat at the right office and had resulted finally in a visa de sortie which, in its turn, conditioned the permission to cross the Atlantic." Nabokov’s chess problem is a homage to the detour, in art and in exile.

I said "in full": in fact I have omitted one very small detail, which is the solution to Nabokov's problem, set up by Shpilman/Lasker on the night of his death. The puzzle is below, the condition being White to play and mate in two. 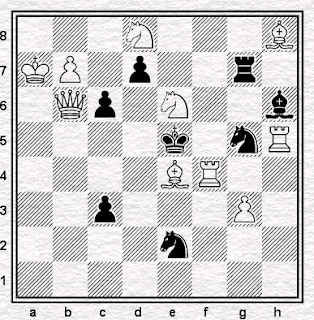 The solution will be given tomorrow, along with some further observations on the review, the strange description of the problem and the possible relevance of Emanuel Lasker.
Posted by ejh at 10:40 am

Is the solution to the puzzle Rxg5+ w Qc5#, or am I missing something? I frequently do with these things...

Tom? That's not an answer.

I've spent a while on the problem (when I should be working) but not found the solution. b8=N would be nice but there is c2.

There's a gentleman who plays in Richmond Rapidplay events who changed his surname to Portugal and then changed it again, explaining that his previous name was the name of a country!?

Put me down for Division 5 next season Angus...

Thanks for the correction!

Tom, perhaps I should explain. I didn't see how Rxg5 prepared Qc5 and after Qc5 a pawn move blocks the check (I think).

It does now, but not necessarily on the diagram originally posted....

Well there was, but it was the wrong colour!

Oh dear, I missed the fact that the b pawn would be pinned after d5.

Are you sure there are no more mistakes? There's lots of mate in 3s on the board. I look forward to your blog tomorrow.

I imagine I'll post while watching the English football scores in the afternoon. Expect errors due to distraction, expecially if Oxford start losing to Stafford Rangers.

If c2 is the problem the obvious answer is to physically stop it. Does that work?

Are you suggesting Bc2, Richard?