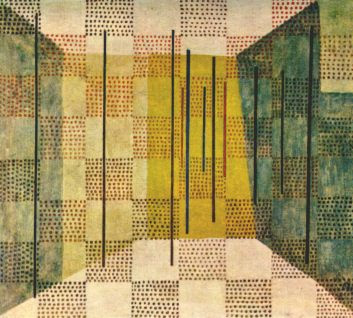 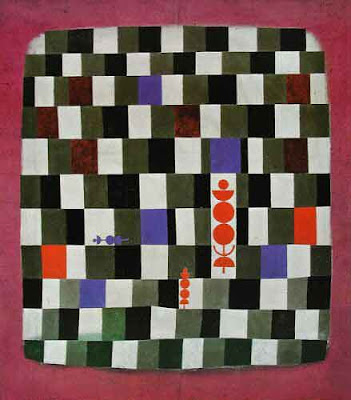 Pictures without people, not once but twice; no players, only the paraphernalia of the game. Two pictures, and therefore a rather long comment from me (you can get a more friendly view of it by clicking on the “collected” link in ejh’s Chess in Art blog), for which, apologies; but please address complaints to the blogger and thank your lucky stars that he didn’t post three. And before we go any further: yep, they’ve put black squares where black squares oughtn’t to be. They’ve Set The Boards Up Rong. But hey; this is art, not chess, so forgive them their trespasses.

En passant, a note about titles. Most pictures have them. They are signposts pointing you in the direction of the picture’s meaning. Usually you want to know what a picture is called as soon as you look at it. Sometimes you find something like “Study #42” and you are a little lost. In these abstract-looking people-less pieces Klee has given his pictures precise titles:"Schachbrett" or “Chessboard” (not “chess game”; not “chess”); and “Super Chess”, which is seems especially deliberate in the original German: “Űberschach”. So, where does Klee want us to go?

The first work is the subject of a fascinating, beautifully animated and, to me, nigh-on incomprehensible online article, by Italian mathematician Roberto Giunti* which discusses the perspective of the coloured bars and the background of rectilinear shapes in terms of Klee’s artistic ideas and, from a different inspiration, mathematical theories of “deterministic chaos” (whatever that is in maths, it sounds like a fair description of my flounderings in chess).

In his article Giunti refers to the perspective in Klee’s picture as creating the illusion of a room appearing beyond the chessboard. Now, this is where I find myself a fellow traveller with the militants of the LASTBUR persuasion (those fanatics in matters of chessboard disposition), because to my simple mind a properly presented chessboard should be flat on the table. That’s flat as in horizontal; and not vertical as in a window into a room, or an artwork on a wall come to that. Looked at my way the perspective should be metaphorically beneath the board, not behind it. And what lies beneath? Digging down, we would find the past.

So, the chess player in me sees the image as a board bearing the traces, the memory, of games past that have been played upon it: the lines are ancient rook moves worn like chariot tracks into a Roman pavement; the bishops have left their mark on the long diagonals; there are the shades of king side attacks and queen side expansions; and the centre bears the imprint of countless occupations. This may not have been what Klee had intended, but I don’t think he’d mind. It’s where I want to go as a chess player, and maybe it’s a bit more poetic than “chaotic determinism”, or whatever it was.

In Űberschach painted six years later Klee has used a title with that word/prefix “über” which, so Wikipedia tells me, can convey "over", "above", "meta" and "super", all pointing upwards and all with resonances in this work. It carries a lot of detail in its corrugated surface. The repetition of white, mid-tone and black creates an illusion of projection over and above the picture plane; there are files, ranks and diagonals with subtle variations in size and “depth”. Some squares take on positive colour (blue, red ochre, vermilion), invariably displacing black (perhaps they register the presence of minor pieces or pawns). Three pieces are clearly depicted. The major one, a king or queen, is privileged to rest on a throne of three white squares; the two lesser ones take what is given.

These three pieces elevate us to a higher level. The abdomen of the major piece is on a Golden Section, as is the one on its side. A line from the centre of one to the other via the centre of the inverted piece (which just happens to fall on the mid-line of the composition) gives you a right angle and a knight’s move. Lowering the tone somewhat, and borrowing from an irritatingly familiar T.V. advert: this is not just chess, this is Meta & Super chess. The work directs us to the beauty of chess using proportion, symmetry and colour modulation, the ingredients of harmony in art.

Klee travelled a long way in his artistic life during which, in his most famous aphorism, he was taking a line for a walk. He died three years after creating Űberschach. Maybe he is up above now, listening to the music of the squares.

*”Analysing Chess (sic): Some deepening (sic) on the chaos concept by Klee” www.mi.sanu.ac.yu/vismath/giunti/00Chess.htm

It's a good job Martin S. is here. I look at those two pictures and think "effin' eck. I could have done both of those. Modern art is rubbish etc."

Anyhoo, those for whom cutting and pasting Martin's link is too much of an effort can click
here.