The prominence of Ray Keene in English chess is such that I often feel he should be awarded some sort of official title, perhaps in lieu of "Grandmaster", which status, in Ray's case, is rather reminiscent of the safety routine on an aircraft: it is mentioned so often, without actually being used in practice, that nobody takes any notice of it any more.

Tatmaster might not be inappropriate, to mention one area where he has some stiff competition but nevertheless leads the the field. Grand Self-Promoter has a certain appeal: Ray On Anything usually means Ray On Ray. Van Gogh painted himself thirty-seven times, but at least when he painted The Potato Eaters he didn't paint himself in the middle of the picture, distributing chips. Or, as would be more likely if Ray were the artist, sitting at his favourite table in Simpsons-in-the-Strand, being served personally by the specialist Potato Chef. 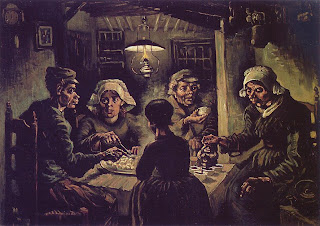 Van Gogh, of course, was a genius, and died penniless. Ray's genius lies largely in his capacity to avoid that condition by an enormous distance without doing much that is meritorious to deserve it. It also lies in getting on my nerves, as occurred when I happened on this posting on Sean Marsh's blog and suffered some persistent irritation as a result.

You may read the whole thing yourselves, should you possess the patience, but in brief, it largely consists of a letter from Ray to Kate Hoey, proposing the organisation of an annual grandmaster tournament in London. Well, what an admirable venture, you may think, and you would be wrong. Of course in principle you would be right, but in this particular instance you would be wrong.

Why do I say so? There's a few reasons, as it happens, but in the first instance, I don't believe that prestigious chess tournaments - or anything else - are organised by people writing letters out of the blue to the Mayor's office, containing no concrete proposal, no indication of any funding and nothing at all more specific than an invitation to lunch.

What's more, I don't really believe that Ray thinks that either. If Ray had anything serious to say, he wouldn't be popping a letter in the post, he'd be in Kate Hoey's office talking to her about it. He'd be in her office - having first of all discussed it with her boss, Boris Johnson, for whom Ray worked at the Spectator for a period of six years. Or perhaps Boris isn't answering Ray's calls these days. Which is probably a good thing, but it casts some doubt on the suggestion that Ray is Mister Mover and Shaker in the world of chess.

He does, it's true, mention Boris in his second paragraph - the one in which he refers to the 130 books he's written, while wisely omitting to mention the reputation this oeuvre, substantial in numbers if in no other way, has earned him. Did I mention that Ray On Anything is always Ray On Ray? He starts to talk about himself in his second paragraph: the actual proposal has to wait until his sixth.

Prior to this, we have a spiel about how

which might or might not be true, but it is odd - or it ought to be - that rather than attach some of the research that has taken place on the subject (in the New England Journal of Medicine) Ray attaches

an article I have recently written for "The Times" about this

Well, I could go on, as Ray goes on, eventually informing Hoey in a classic Ray Keene touch that

but it is Friday and I suspect our readers lack the determination to plough though the whole letter raising their eyebrows at each questionable claim. So suffice it to say that:

ii) the letter, despite being written in May, has received no response.

Well I never. How rude.

I have been racking my brains to work out precisely what Ray is up to here. I have narrowed it down to three possibilities:

a) Ray knows very well that this is bullshit, but has written the letter as an effort-free way to make good publicity for himself ;

b) Ray thinks that something of the kind might happen in the future and has written the letter so that his name comes up if it does - it's all about positioning Ray Keene ;

c) I am quite wrong above and Ray really has started to believe his own publicity, perhaps as a result of spending too much time at Simpsons-in-the-Strand.

If so he must have been terribly disappointed that so far he has received no response. I am a little less so: personally I'd quite like to see a grandmaster tournament in London, but I'd like to see Ray Keene separated from any attempt to organise same.

Or perhaps the sheer extent to which he keeps getting away with it does constitute style, of a sort. Ray Keene as Arthur Daley. Or Ray Keene as Budgie.

Photo: Chessbase
Yes, I should probably let him bother me less, and see him instead as a comedy act, an important part of our cultural life, his place cemented by many years of performing a well-rehearsed and well-loved act. That title? Chief Embarrassment to the World of English Chess.

Oh, I see Ray's getting into vanity publishing now. A shame that, since I've always thought of vanity publishing as a means of parting the unwise from their money while doing very little for them. Which, for Ray, would be a new departure.
Posted by ejh at 10:50 am

The Staunton memorial webiste was vintage Keene, the pompous crap that was written on his roundups was unbelievable. The effort he put in to organising the event is amirable but the gloat about mushrooms sauteed in pink champange is another in the restaurant is another.
I don't know if you've noticed but his The Times column seems to be on a long run of Tal's games, I guess he can't even be bothered to look at the current games going on.

I have got a few of Ray's books. He's by no means my favourite author, but many of the books are OK and there has to be a role for somebody who churns it out.

I'm also grateful to him for his role as chess organiser bringing World Championship matches to London amongst other things. If some of his ventures hadn't come a bit unstuck then the pages of Kingpin wouldn't have made such interesting reading.

Is this a defence of Ray Keene?! Maybe.

Depends how many you mean Mike. His conduct as regards the 1993 match was in my opinion shocking in any number of ways.

Not everthing connected with Braingames will pass ethical muster, either, as I recall. It's one thing to say that his ventures came unstuck, but another (which these comments boxes won't be discussing in detail) to say precisely why.

Van Gogh painted himself thirty-seven times, but at least when he painted The Potato Eaters he didn't paint himself in the middle of the picture, distributing chips

Along these lines ... that chess board you see as you go into Simpsons is pretty funny.

As a frequent visitor to the Staunton Memorial (for which pleasure I paid precisely £0.00) I'm grateful to Raymundo for the part he plays in organising this event.

That doesn't mean he gets a free pass for some of his, shall we say flamboyant, doings

Has anyone read _Petrosian vs the Elite_? I've seen some decent reviews of it, although it sounds more like it's by Julian Simpole with just the indroduction by Keene.

I'm a Racing man and to me he is the John McCririck of Chess.

Also, surely the Staunton Memorial does not have to clash with the British Championships every year

I've not seen it - but funny you should raise the question of mixed authorship. There was an interview with Ray on Chessville recently in which he referred to himself as having written The English Chess Explosion which is the sort of thing I mean when I refer to things that aren't quite true but aren't quite demonstrably false.

Really Richard? We find RDK fine. It's certain other grand masters that seem to get upset with us.

Never met the man. Read his Times column though ;) (you did see my note about me not being RichardJ btw, didn't you, for the avoidance of confusion?)

It would seem appropriate to create a Facebook group to celebrate RDK and bring fans together in once place. Who will volunteer?

Yes I did see that note. Thanks for pointing out you're not Richard J.

I really enjoy Ray's columns in "The Thunderer" - the prose is poetic - almost Byronesque.

Frankly some of the comments herein just serve to demonstrate how petty minded chess players can become when faced with success. Indeed may I strongly recommend the following website - http://www.speakers.co.uk/csaWeb/home where you can book a speaker who to quote "has won numerous international and grandmaster level tournaments". His fee is a measly 12,500 euros.

I would point out that this fee exceeds that demanded by such menial household names as Sir Geoff Hurst, Colin Jackson, Midge Ure, Graham Gooch, Pat Cash, Michael Portillo et al. But hey gold medallists, Wimbledon winners, Cabinet ministers and the like are mere hoi-polloi when you can have the wit and wisdom of a man who can lecture on "the need to sacrifice at key moments" and who was "Absolute British Chess Champion".

I, for one, would certainly stump up £10,000 or so for myself and guests to feast on thoughts of "the difference between strategy and tactics". Okay Sandi Toksvig and Terry Waite might be cheaper but I know who will offer me a deeper insight into the world's problems.

I have "Flank Openings" ( bought second-hand for the princely sum of 4 euros.
I find it good, but it was published in 1970, so I guess he was putting the effort in then.

I agree that it is admirable that he tries to organise chess events, esepcially in the UK. However, with the Simpson's event and the British Championship clashing these days, you would think that some better co-ordination in British/English/UK chess organisation would be on the top of everyone's lists, if, that is, they have 'chess' as the main priority, and not 'nest-feathering'.