Today is the day that the Tick Tick Tick ... is over. I've finally arrived at the age of 40 so a celebration is in order I think. What could be better than an S&BCC blog post that covers one of the most fascinating opening variations and one of my favourite moves at the same time? 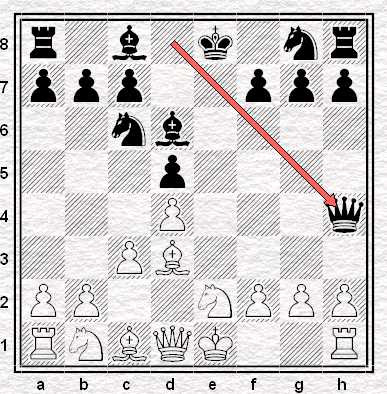 White's quiet play leaves Black with a lot of options to choose from here. Psakhis, for example, has analysed ... Nge7 and Watson mentions ... Bg4 while somewhat further back Nimzowitsch recommended ... Nf6 and Alekhine himself also suggested ... Qf6 as a possibility.

Regardless of the objective merits of these moves it seems to me that amusement value alone demands 6. ... Qh4 be played. After all, it's not often that flinging your queen into opposition territory right at the beginning of the game is a remotely sensible idea. There's also the fact that ... Qh4 only works because Black is taking advantage of being a move behind in development**. Pleasing as these two points are, what I really like about the idea ("!!" according to C.J.S. Purdy, a more restrained "!" from Watson) is that Black isn't trying to start 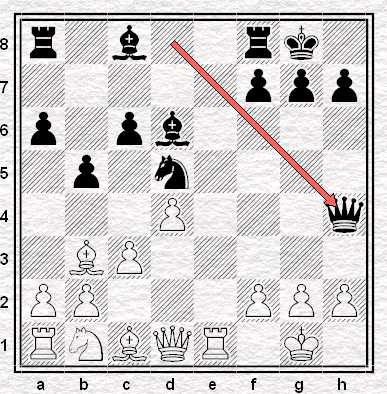 an attack. No, he's chucking his queen deep into the enemy position simply to impede White's development. "It was important to prevent 7. Bf4" says old Alexander*** and I can't but agree.

What's not to love about 6. ... Qh4?**** The only downside is that I so rarely get to play it. Just once in fact and then, sadly, although I got an extremely good position out of the opening the game ended as if Amir Khan had suddenly taken over control of the Black pieces. Cue an instant knock-out.

Ah well. Maybe I'll get a chance to make amends to ... Qh4 soon. In the meantime there's always Alekhine's games to enjoy.


Two Alekhine wins on the Black side of a ... Qh4 French Exchange and the prospect of cake later on too. Being 40 is turning out to be not too bad at all.

TIFE II
Castle long then chop him up.

TIFE III
Castle short then (nearly) chop him up.

TIFE V
Uhlmann can do it too.


Other posts that cover the French Exchange
Gurevich-Short, 1990
Nosher wins a critical game.

JB Plays the Black side of the French Exchange
but doesn't handle the clock very well.

** As pointed out by C.J.S. Purdy. Needless to say Black wouldn't want to play ... Qh4 if White hadn't already committed the knight to e2 thereby losing the option of kicking her majesty with Nf3. Moreover in the French Exchange Black often plays ... Bd6 and ... Ne7 but the response Qh5 is ruled out because White will typically have already blocked the d1-h5 diagonal by developing the king's knight.

May all your future French exchanges lead to crushes like this!

Isn't Black playing for a draw in the middle of that?

I was happy with a draw with Black against one of main rivals, as it would retain my lead in the tournament. But I knew there was no way he would take a draw.

By the time you're my age, David, AFCW will probably be playing League football. (And OUFC probably won't be playing at all.)

Thanks for the birthday wishes all and thanks to Paul for that little Exchange French birthday prezzie.

My opponent played 7. Ng3 in response to the queen move, although I replied with ... Bg4 straight away.

Good memory you've got if you can remember that game from 20+ years ago.