"In the end I did OK": What Happened to Eric Holt

Regular S&BC blog readers may recall that back in February we published an article - Whatever Happened to Eric Holt? - about a promising junior player who disappeared from the game after competing at the British in 1971. With apologies for the delay, it's time I explained what happened next.

To bring more recent visitors up to speed as quickly as possible, I had stumbled upon Eric's chess career quite by accident while in the process of writing an earlier post about Ray Keene's 128 move win against him at that Blackpool Championship - Ray Could Play IV - but quickly realised that there must be quite a story to uncover if only I track Eric down. After all he was reigning Scottish Champion, had finished 7th= in his first (and as it turned out only) British Championship and had previously competed successfully in European junior events facing such names as Romanishin, Ljubojevic, Ribli and Beliavsky and yet all of a sudden he just dropped off the face of the chess world. I was determined to find out more. 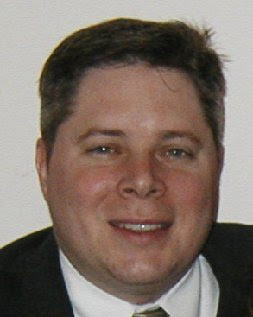 Since Eric pushed his pawns a long time before I began playing the game I began by making an appeal for information about him on the English Chess Forum. Fortunately Alex McFarlane reposted my request to Chess Scotland and that led to a number of helpful replies:-

I was at Boroughmuir Senior Secondary 1968-1974, and latterly captained the chess team. Eric was the team’s star turn ... 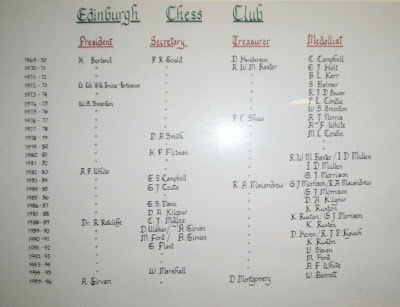 Clearly Eric was well remembered by those who were around the Scottish chess scene back then but as pleased as I was to hear from everybody it was nothing to the feeling I got when the following email popped into my inbox.

Hello! This is Eric Holt. I took a look at your blog piece and it is accurate. I would be delighted to talk or email any time. 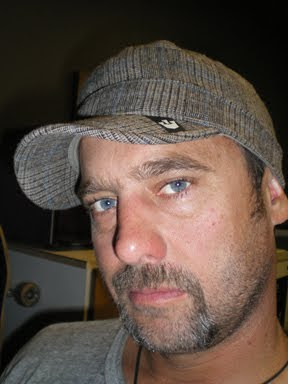 I had sent a speculative message to a website that appeared to have a connection with an Eric Holt and luckily enough the webmaster forwarded it to somebody else who passed it on to a chap who did indeed turn out to be our man. Eric was very generous with his time and we swapped emails for a couple of months, a correspondence which I've edited into the interview which appears below.

So thanks to Geoff Chandler, Alex McFarlane, Craig Pritchett, Alan McGowan, John (Chris) Linskaill and most of all thanks to Eric himself. I'm not sure I'd be quite so keen to talk to anybody about what I was up to in my late teens but then I wasn't doing anything to match Eric's achievements. Mind you, Eric was very modest about it all; in talking to him I got the impression that he didn't think that he'd accomplished anything particularly exceptional at all ...

Jonathan Bryant:
You had an exceptional British Championship in 1971, finishing in 7th place at your first attempt, but then you stopped playing. What happened?

Eric Holt:
I had already decided to quit chess before I played in the British. In 1971, after I turned 19, I decided to stop in order to spend more time with my studies. At that time I had been doing pretty well and I could see that chess would occupy an increasing amount of my time. I made a drastic decision to stop playing altogether.

JB:
And then you left Scotland?

EH:
In 1973 I was invited to the US to participate in a missionary seminar and program. I ended up staying a little longer working for many years as a missionary and later as a minister. For the past 15 years I have been mostly involved in financial and administrative work.

These days I live with my wife and three children in Tarrytown, New York. I work for a non-profit organization which has its headquarters in New York City; currently I serve as the organization’s treasurer. The recent photo of me that you found is from a seminary website where I serve on the board of directors. Occasionally, I teach a course there in non-profit financial management. 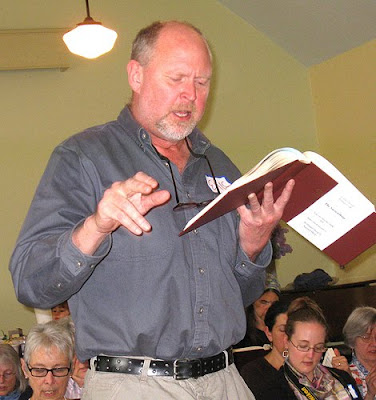 JB:
These days I imagine it would be tricky to just up sticks and move to America as you did.

EH:
Back then it was a piece of cake to obtain permanent residency – it took only a few weeks.

EH:
Several years ago, I became a US citizen while retaining my UK/EU passport. I guess I’m a dual-national [it is perhaps of interest that Eric, as he himself pointed out, often favoured US English spelling of words in his emails to me – JMGB ]

JB:
Do you ever make it back over here?

EH:
My daughter was over in London a few months ago for a high school band performance. Once in a while I visit my ailing mum in Edinburgh.

JB:
So what about chess now? I saw the review of a chess book that you wrote on Amazon …

EH:
A couple of years ago a friend and I decided to start a small chess club, meeting twice a month in Tarrytown. We have around 30 members and perhaps 15 show up at any one meeting. We have all ages from 5 to 60 although on any given evening the players are mostly under 15 with a few adults and university students.

We have occasional tournaments among ourselves. Once in a while we invite a team from a neighbouring town for a competition. Whenever we meet the last 40 minutes or so is coaching from myself, usually in the form of quizzes (puzzle solving).

JB:
Do you play any ‘serious’ chess these days?

EH:
From time to time I think about playing in a tournament in the US but I haven’t done that yet - it is very time consuming. Once in a while I play online using Yahoo! Chess. 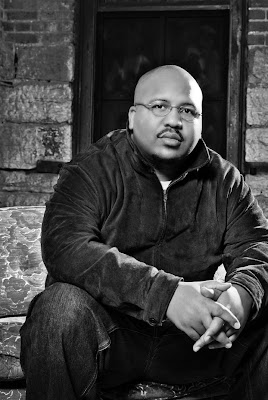 JB:
So you’ve not been involved in tournament chess for many years. Were you aware of what became of the people you were competing against?

EH:
From time to time over the years I searched online and saw, as you point out, that some of the players I played against had become some of the world’s best players and when I bought some chess books for the chess club I noticed some familiar names in them – people that I had played against many years ago.

JB:
What do you remember of your chess years?

EH:
The chess world in the late 1960s and early 70s, at least in Scotland and England, was quite different from today. The competition did not seem so severe; there were no computers; less chess books and other resources; things were less institutionalised etc.

In middle school I played in simuls against Smyslov and Gligoric, scoring a draw each time. I had Smyslov totally beaten but in the end, when all the other players had finished, it was just him and me. A 14-year-old versus the ex-world champion – so he eked out a draw!

JB:
You seem to have had a very aggressive playing style.

EH:
I tended to adopt ideas from the best players of the time. Petrosian when I was younger – English opening, Queen’s pawn etc. Later Fischer was all the rage, and I pretty much copied whatever he did – hence the Bc4 Sicilian, Najdorf Poison Pawn, King’s Indian Attack against the French etc. In the Bc4 Sicilian the Rxf7 sacrifice was my invention and it worked for me in a host of games. 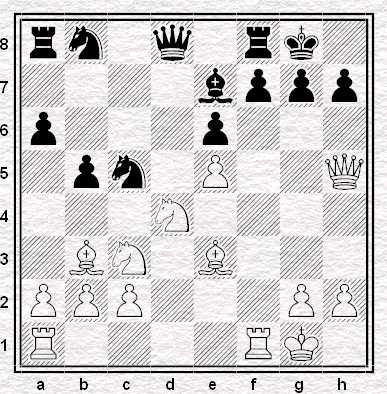 Eric Holt's patented Rxf7!
[For the whole game and another example click here]

JB:
And you were a pretty successful junior.

EH:
I was lucky because my trips to all over the UK and Europe were largely sponsored (I forget by whom). One thing led to another and before I knew it I was competing in pretty high level tournaments. Penrose and Keene were my heroes and here I was suddenly playing them in the British Championship in Blackpool in 1971. I really had no idea whether I would do well or poorly. In the end I did OK.

… which is where we came in although I should remind you that “In the end I did OK” refers to a tournament finish of 7th= including victories over Markland (then 2510), Pritchett (future IM) and Evil Uncle Ernie (future British Champion amongst other things) and defeats only to RDK, Penrose and Cafferty; like I said - very modest. 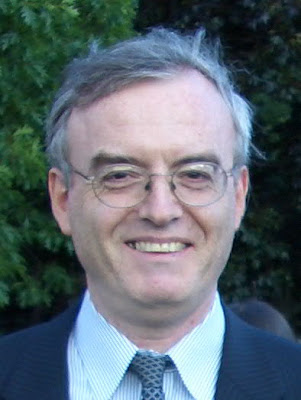 This has been a rather long post but I hope some of our esteemed readership have made it to the end. These have been three of my favourite posts to write and it was a pleasure to meet Eric, if only electronically, and to discover he's still one of us. I wish him and his family well.

Interesting that despite renouncing the game, eventually it got the better of him. As Andrew Waterman, another sometime chess recidivist says in his Intro' to the Poetry of Chess "my chess bug was dormant...I was a chess player the way an alcoholic who has stopped drinking is an alcoholic". A common affliction.

John Healey says exactly the same thing in Grass Arena - and he was both a chesser and a drinker.

But in case he should read this, and to avoid any misunderstanding: Mr Waterman isn't, as far as I'm aware, a drinker! He's just a metaphoric.

Very good JB. For a greater challenge if you wish, see if you can find the entirely vanished Michael Haygarth.

Funny you should mention Michael Haygarth PG ... EJH suggested exactly the same thing to me a few days ago.

Sadly Eric passed away May 22nd 2013 after a brave stoic fight with cancer.

Thanks for letting us know.