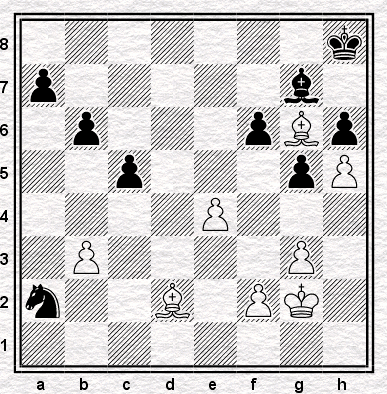 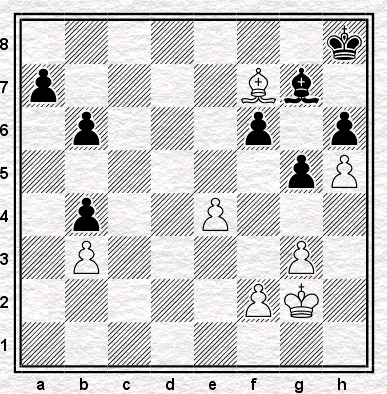 I do intend to write about other things this week than dubious chessboard practice, but bear with me for one more posting. I was going to write "alternatively, enjoy a fine game and the notes", but this was not a very fine game and there are no notes to speak of, or not about the moves at any rate.

When I was discussing this game with my friends at Benasque I remembered an incident from a game, oh, probably more than twenty years ago, in which I arrived at an ending in which either side had a rook but I had two pawns, on the f and h files. My opponent offered a draw and was not at all pleased when I chose to play on. Nor was he delighted when I succeeded in winning the game, since it was, according to him, a book draw, which I ought to have accepted.

I laughed at this. Not literally, though who could have blamed me, but in truth it did raise a question of etiquette: how long can you reasonably play on in an ending which you know ought to be drawn?

That's not, however, the sole point of etiquette with which today's posting will concern itself. Nor is it even the fact that a player made, as the notes under the diagrams state, two draw offers in the space of three moves. Which speaks for itself, except that it didn't. Sánchez Gómez wasn't content merely to make the second draw offer, but proceeded to accompany it with a verbal explanation of why he thought the ending was drawn.

This would have shocked me more than it did, were it not for the fact that this is the second time I've had that experience this year, the other occasion being the game from March referenced here. (It's not mentioned in that piece, partly because that whole game was full of Other Things I Could Have Mentioned, including the fact that the player involved was the same one who demanded a draw here.) In each instance my opponent not only saw fit to talk to me directly, which you are very much not supposed to do, but they also thought they were entitled to insist on a draw and to explain to me why I should concur.

I think this is why I drag up my old experience with the rook and two pawns. We can take it that you're not supposed to start a conversation with your opponent, though plainly some players think this doesn't apply to them. (As do some arbiters, since when I called over an arbiter to complain, he took no action - but that's some arbiters for you.) I think we can also take it that you're out of order in trying to discuss the position with the opponent before the game has finished, although some people think this doesn't apply to them either. But who the hell are these players who think that their opponent is somehow obliged to agree a draw before they've demonstrated on the board that the position is drawn?

I don't deny that there's a potential breach of sportsmanship here. While you can of course, within the laws, play on any game as long as you like, I certainly don't think that you should carry on playing indefinitely where the game is clearly drawn, where the opponent has demonstrated that he or she knows exactly why this is so and where you have no genuine plan to try and win the game. Where, in other words, you would only be carrying on out of pigheadedness, and hence, to my eyes, disrespecting the opponent in so doing.

But none of these applied here. Of course the positions above should be drawn, quite easily, but White does have a winning plan, and Black has not yet shown that he knows how to neutralise it - which, of course, he never did. I might very well have agreed to a draw, and no doubt I would have been more amenable to that draw had I not previously had the kind of position it took a lot of substandard moves to spoil. Turning down the draw wasn't entirely a matter of objective assessment of the position.

But even so, if that constitutes pigheadedness it was directed at myself - it constituted a refusal to allow myself to give up the win until it was absolutely necessary. Meanwhile, I could see that Black's bishop was poor, his h-pawn was conceivably vulnerable and that I had the opportunity both to create a passed pawn and to infiltrate with my king. Right then, those are winning chances.

Which doesn't affect the fact that the game should have been very easily drawn and that Black could have brought this about either by exchanging on f4, or by leaving his king on g7 (unless and until White's king went to the d-file). And if he didn't do either, and didn't understand why he should, then he had no business whatsoever expecting a draw.

At least I shut it for him. Though I would rather have stuck up it the arbiter rather than the opponent, since I was even more annoyed with the official than with the player. Still, Black wasn't at all happy that he lost, and I was very happy to see it. It should perhaps be satisfaction enough, to win an opposite-coloured bishop ending a pawn down. But some wins are more satisfying than others.

I turned down a draw offer when I had king and rook's pawn against king - and his king could clearly get back.

I saw no point in accepting since it was only going to take a few more seconds to play the game out - which we duly did. I prefer finishing like this on aesthetic grounds as much as anything else. Aside from that, I don't see why I would accept a draw from somebody who has no material at all and has no possible legal way to win.

You would think with a rating of 1950 that he would treat the draw refusal as a wake-up call and notice the possible plan of the advance of the e and f pawns. But he neglected the simple way of defending opposite Bishop endings, namely to park either the Bishop or King on a good square and shuffle the other one. So the optimum squares for the King and Bishop are presumably g7 and e7.

I would say that declining the draw at around move 40 is an insult to your opponent's endgame skills, one which in practice was completely justified. Was it even right to all the Knights exchange so readily? After all with the Knight on the board, you can claim winning chances for Black as well.

I certainly didn't think he needed to swap off the knight so quickly, although I can understand his doing so and it shouldn't affect anything. But it certainly told me that he wasn't going to try and put me under any pressure.

Can Black try to win with the extra pawn? Some plan involving Bf8 and Kg7 with a5 to follow. You then sacrifice the c pawn by c4 to get the a pawn running. Exchanging the dark squared Bishops might also be good because White's pawns could be stuck on the same colour squares as the Bishop. At the very least it's a distraction which might make White more willing to accept a draw offer.

I sat in the audience at the London Classic watching Kramnik play to move 130 odd against McShane with R+B v R before drawing on the 50 move rule. I don't remember McShane ever telling Kramnik he should accept a draw because the books say so.

Indeed not, Adam, although he might have tried: "please agree a draw, I'm supposed to be doing an interview on Radio 5 Live"