Petrosian and Bryant triumph in Benasque

Benasque finished on Saturday: the main tournament was won by Armenia's Tigran Petrosian with 8.5/10, half a point ahead of the field. He took home the winner's trophy and 4000€. 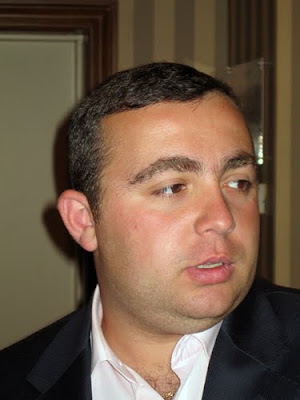 "I know you're thinking it, but don't say it"
However, this feat was surely overshadowed by the first place achieved in the category for players without a FIDE rating - which went to none other than Jonathan Bryant of Streatham and Brixton chess club, and the blog which you are presently reading.

Reaching 5/10 with a last round draw against WIM Roquelina Fandino Reyes of Cuba, he won the competition on tie-break from Pedro Miguel Tómas of Spain and hence took home 200€ (twice the prize, as it happens, won by the grandmaster who came 23rd) as well as a copy of Ajedrez Para Dummies and a trophy bearing a symbol amusingly similar to the Portsmouth FC club badge. 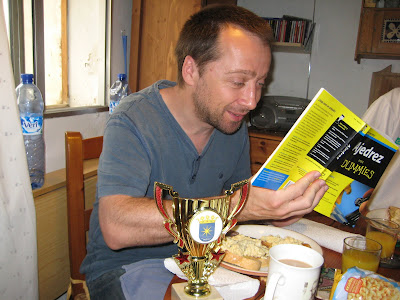 Chess is food and drink to him
Well done to these and all the other prizewinners (I should also mention my teammate Antonio Abós Rosico, highest-place finisher from Huesca Province) and we hope this will encourage readers to come next year. More, on Benasque, in posts to come.

Congratulations to Jonathan. Angus also did rather well as I see here:
http://chess-results.com/tnr52562.aspx?art=4&lan=1&fed=ENG&turdet=YES&flag=30

Good warm up for Angus in the forthcoming British. Well done!

Looking forward to reading all about it on the blog.

Thank you gentlemen. It was certainly a fun event and I'll definitely consider going again next year.

In other S&BCCer news ... I bumped in to Alan Hayward today and he told me he'd just won the Major at Weald (scoring 4.5/5) while Peter Kemp won the Open with 4/5.

Not everybody found this a reason for chortles.