Broadmoor Chess - There Has Been So Much Piffle

This series has been following, in its most recent posts, the story of chess in Broadmoor high-security psychiatric hospital in Berkshire, as documented in the Broadmoor Chronicle, the patients’ in-house magazine.

There was as strong tradition of chess behind the walls, both as a social pastime and as a serious game with, post-war anyway, some club-strength players. These students of the game wrote an occasional chess column in the Chronicle, and were the mainstay of the internal Broadmoor Chess Club, which took on several local club teams in the 1970s.

The Chronicle appeared pretty regularly from the mid-40s into the 80s; its chess column perhaps less so. After a short break, as it was wont to have, it re-appeared in January 1967 posing a mate in two problem, which we reproduced in an earlier episode, but here it is again (solutions are at the end, if you need them). 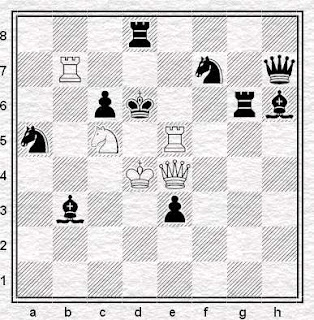 Given in the Broadmoor Chronicle 1967
“For Chess Fans” was the heading of that edition of the chess column, but it might also have intrigued an unchess fan as it revealed that in the 1920s Broadmoor had a problem composer in its ranks, and that his work had been published in The Daily Telegraph. He was one Walter Stephens. After another break, of two years, the Chronicle at last gave its readers the solution, and offered a second Stephens problem (also a mate in two, as are they all in this post) 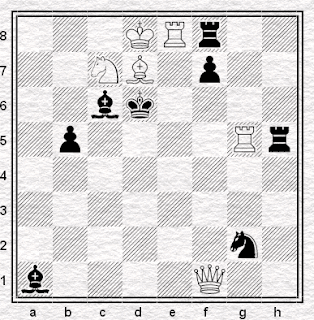 W. Stephens
Given in the Broadmoor Chronicle 1969
At about 2.30pm in the afternoon of Thursday 24 August 1905, Walter Stephens, or Cyril A Desparde as he also called himself, had gone to Greener Gunsmiths in the Haymarket to buy one “for house protection”, but was told, quite properly, that he needed a licence. So, he simply popped next door to the Post Office and, as was possible in those days of yore, got the requisite document over the counter. He went back and bought the revolver he'd had his eye on, and a small amount of ammunition. At the trial, the shop manager said “I thought the man seemed a bit strange, and that he had shaken hands with me for rather a long time; customers who are strangers do not shake hands with me.”

"Strange" his behaviour may have been (not only on the tenuous account above, but from other testimony as well), but inebriated he certainly was - he’d been drinking for several days according to the Police surgeon who saw him after his arrest - and at 10.15 pm, in the street outside 45, Honeybrook Road, Clapham, just off the South Circular, near the Common, he emptied the revolver into his unfortunate wife (they’d been married for 21 years; her sister said they were very fond of each other, as did he; Stephens was already aged 47), and she died the following morning in St. Thomas’s Hospital (though, as the post-mortem showed, the medics had not spotted, in their first examination, the fatal bullet in her lung). 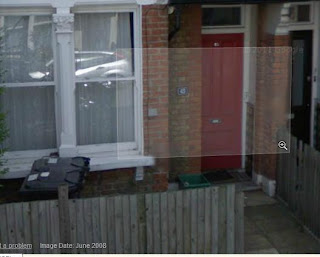 The scene of the crime, today
(from Google Street View)
Evidence was given that Stephens had spent a short spell in an Asylum in Jersey, and another in a padded cell in the Infirmary at Dulwich, both a few years before, and had persistently exhibited delirium tremens from alcohol abuse. "Guilty but insane" he was admitted to Broadmoor at His Majesty’s Pleasure.

Now, in 1967 the Broadmoor Chronicle told its "Chess Fans" that back in 1922 – that’s 45 years earlier - Stephens (who had by then been in Broadmoor for 17 years) had written a letter of complaint to the Daily Telegraph. The Chronicle reproduced the text of the letter:

There has been so much piffle written about Broadmoor in the papers of late that perhaps you would like to be able to say something true about it, so I enclose a couple of my problems as a sample of the work done here.

And yes, Walter Stephens had indeed written to the Telegraph. Here is the letter, as printed in the paper's chess column on July 1st 1922, along with the two problems given above:

(click on to enlarge)
But the fascinating disclosure about Walter Stephens, Broadmoor’s very own chess problemist, didn't end there. The Chronicle went on to say, “It is interesting to note that not only did Walter Stephens continue to set problems for the Daily Telegraph, but he was a regular contributor to the Manchester City News, the Observer, the Daily News and the Referee…” This may be an example, reproduced at the time in an anthology. 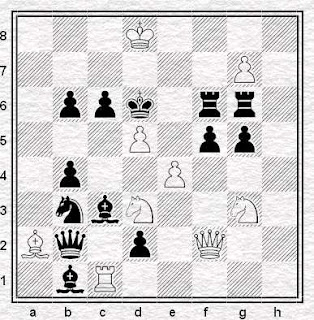 W. Stephens
Given in Chess Problems Made Easy (1924)
by T.Taverner, Chess Editor "Daily News"
Your blogger admits to not having had the time to trawl through the newspapers to locate any of the others alluded to (the problems in this post, apart from the first two, have been sourced via the internet), so they remain lost - if any reader of this blog turns up a Stephens, please let us know.

And there is yet a bigger intrigue in all this: how did the author of the Broadmoor chess column in 1967 know about the 1922 letter? After all, Walter Stephens wasn't around to tell him because he had died twenty years earlier in 1947. So we ask again: how did the Chronicle come by the Stephens story, especially as (according to the Berkshire Record Office Archive) there is no copy of the 1922 letter in Stephens' Broadmoor file.

And not only that: the Chronicler was able to report also that Stephens had been published in the Manchester City News, the Observer, and so on and so forth – a fact which is not mentioned in the 1922 letter itself. Is it really likely that the 1967 chronicler could have found out for himself about Stephens' widely-published problems by, say, researching the newspapers of the 1920s? In Broadmoor? Surely not. Could somebody have told him? Well, if so, who? Could Stephens' personal papers have been somehow handed down within the hospital, patient to patient? In a high-security set-up like that one? And where might they be now?

Thus we finish this post with that mystery, three more Stephens problems from The Problemist of the 1920s (below), and another question: who was A. Foster?

Three problems by A. Foster and W. Stephens
From The Problemist (l to r) 1928, 29 and 30Sourced from Meson
And that also brings us to the end, for the time being, of this series on Dadd, the Asylum, and the subsequent chessers in Broadmoor Hospital (as we call it today). Little did your blogger anticipate the path ahead when visiting the Tate's Watercolour exhibition back in March: from the "The Child's Problem" to Walter's problems (chess and otherwise), and everyone else along the way.

Perhaps now we can see the merit in his complaint: “so much piffle” does get written about the patients and what goes in Broadmoor (and I hope this series may be spared that epithet), and it deserves rebuttal. Their chess, and the Broadmoor Chronicle, are worth celebrating: they do the patients proud, and not forgetting the staff.

Many thanks, Martin, and congratulations! You could make a book out of the Hereford and Broadmoor chessers, but probably no one except me would buy it.

Richard,
No need to buy it, if they were ever to appear as a book you'd get a complimentary copy!