And Here's To You, Mrs. Robinson

There is a good case for filing this under "The Other Talent of..." in the Chess In Art Index. Except that we'd have to say "talents" plural. The subject of today's post has them in buckets, starting with her jazz singing; much acclaimed among those in the know. She is Nette Robinson, but I'm not sure if she has recorded a cover of the Simon and Garfunkel hit on any of her albums. It is not, for example, on the retrospective Remembered Time (a homage to jazz pianist Bill Evans) that she made with the doyen of British jazz, Michael Garrick.
Hmmm...A successful jazz vocalist who is also an aspiring chesser - Nette is a member of Richmond and Twickenham Chess Club - that's a vanishingly small demographic, unlikely to be found elsewhere, and certainly not in the suggestive compilation below, which is hardcore instrumental.
As if chess-playing and jazz-singing were not enough to keep her busy, Nette has mixed and matched another of her multi-talents to make jazz art.
As you can see above, Nette's celebrations of the jazz greats are reworkings of images, invariably of solo performers, memorable from album covers such as on the classic Blue Note label. Here her emphatic brushwork and simplified tonality animate Coltrane in soaring flight. It has something of the quality of the grainy footage of his performances in the 60s. You can sense the ecstatic ascension as he surfs the crescent of his favourite thing: a twenty minute solo ("I don't know how to finish," he complained; "Just take the horn out of your mouth" Miles Davis famously suggested). Nette's painted portrait isn't earth-bound either. It, too, breaks free from the bare facts of a photographic image, however artful the latter may be.

Re-mix and now we get chess art. Before we continue: yes, that was Nette with an article in the April 2013 issue of Chess.
If you can't find her in the ECF grading list, it may be because she is there under her married name of Woods (so apologies to Miss. Robinson, or Mrs. Woods, for the small liberty with the title at the top), and very much on the lower reaches of the chess learning curve, as she would be the first to admit. But she clearly knows enough already about the game for it to inform her chess art, her other talent, and the one that interests us in this post.

Many readers of Chess were at the private view of her chess art exhibition in the Muse Gallery in London's Portobello Road ten days ago (and now closed), though your blogger had, unfortunately for him, to be elsewhere, embroiled, as Streatham and Brixton CC was, in a crucial London League relegation battle. But a visit to the show the next day provided a chance to see her chess art in the flesh - and there is no substitute for seeing the real thing, paint, brush-marks, actual size, and all.

First, let's look at her photo-sourced images of chess players - all well-known. Some are straightforwardly in pencil, delicately done; and there is one of Gary Kasparov, painted Coltrane-style, although it didn't seem to me to be as successful for a chess great as a jazz legend. This style works best, IMHO, when it is called on to do energy, and for this image Gazza models dead-pan.

Going a step further in the exploitation of flat tone (white, black and a grey or two), now in defined blocks with the painterly gestures suppressed, Nette has developed a simplified style that has surprising expressive power - less is more indeed - especially with a cropped, raking, assymetric composition; and the familiarity of the subjects does not get in the way, far from it.

The one that appealed to me the most was of Tigran Petrosian, as recognisable for his hairline as Tal was for his stare.

Both Tal and Tigran, caught in their solitary absorption, are pushed over to their side of the frame, their opponents occluded though their presence is palpable. Tal is highly-strung, on a short fuse. He restively surveys the killing field stretching before him. He imposes his presence. It is his domain. He waits to see the whites of their eyes as he bamboozles his prey and strikes. It is war of manoeuvre and it's personal. Petrosian is turned in on himself, and merges with the background. All around is void. He will quarter his quarry by smell alone. His plan is patience - no rush - to encircle and to suffocate, and it will be done by stealth. It is war of position; it's nothing personal. Tigran and Tal: art imitates chess.

In many of these images of chess-maestros past and present hands play an expressive part. It's a subject we've touched upon before in chess art. However hard we try, we can't read a chess player's mind (it would help my grade no end) but body language or, more precisely, hand signals, give us a clue. For this reason chess artists have grabbed at them for an interpretive leg up. There is a stunning convergence between Nette's portrayal of Iron Tigran shutting out all distraction, narrowing his field of vision, focussing his cogitation, and one of Bill Hook's works (we blogged about it before) which, moreover, also uses a similar tonal economy, albeit with more actors on stage. It makes telling chess art.
Another string to Nette's bow is her paintings of positions, the frozen moment of a key move played or imminent. The ones on show are from famous games; the classics. They are a "Find the Move" challenge transformed and elevated, in which the chess diagram is no longer a means to an end but the end itself - it wants to be looked at for its own sake. 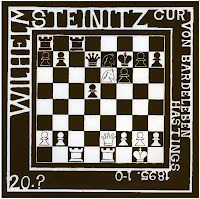 Any chess player might covet one of these, especially if it was created, bespoke, from their favourite move, even one of their own. Unlike the Tal and Tigran in action (or inaction) portraits above, with these position-pieces the chess player has a privileged level of appreciation, and you'd have to ask a non-chesser whether they work for them devoid of chess meaning. But we can apply a test (taught in any art class) to see for ourselves. One way of trying to assess whether the formal compositional qualities of an artwork stand up independently is to look at it in a mirror, or upside down (the picture, obviously), or both, so as to defeat its content. So here we go: 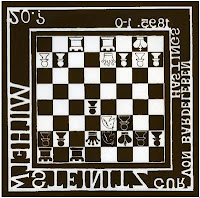 That is quite revealing, and I almost prefer it that way! There is something about having the weight of the textual border and all the black bits in the lower half that gives stability and equilibrium. I suppose that means the obverse for the original orientation. The experiment makes us confine our gaze to the plane of the humble diagram and the pattern of the elements (busy and linear, with a white bit enigmatically stranded among the black) on the unforgiving checkered ground, and the two empty rows now assert themselves. Try the re-orientation trick on the other position-pieces on Nette's website and see what you think. Resist the urge to look beyond the picture plane supposing that there is a game somewhere to be found.

Finally we have the most recent development of Nette's chess art, seemingly the natural consequence of the above: abstracts based on mapping the chess moves of a complete game. A couple of examples were on display in her Muse Gallery expo, here is one of them: Jose Raul Capablanca vs. Rudolf Spielmann, New York (1927). 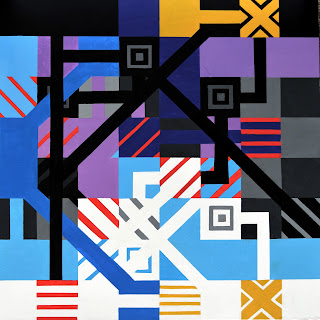 It is acrylic on canvas, 30 inches high, 30 inches wide, and - another crucial dimension - just 26 moves long. As we found with Tom Hackney's chess artworks based on actual moves (we blogged about him here), the temptation to play the game through and "see" it in the painting is irresistible. In the exhibition she gave the relevant game score alongside. It works remarkably well.

Tom Hackney, though, was less interested in the look of his finished works (seductive though they are) than how they got there - the process - as we found when we interviewed him. So let's put him on one side and compare two other artists who have heroically created artworks from the complete move-sets of well-known games. They are Dominique Digeon and Ugo Dossi. We looked at them in posts some time back, and each had their own way dealing with the challenges of complexity, sequencing, and legibility according to their particular artistic intentions.

Digeon depicts the moves as a surge of organic growth, and they intertwine in a floral carpet of many colours. Dossi maps them as geometric incisions as if forged by precision engineering (or perhaps a circuit diagram is more apt as an analogy) in which the moves democratically ignore hierarchy - all pieces are equal - as they mutate through the colours of the rainbow. The labelling of their works is not entirely clear, but I think that the two D's have both, by coincidence, represented the same game by the two K's from Leningrad 1986. Dossi is on the left.

Frankly, I'm not sure that these make a convincing case for presenting all the moves unedited, whether serpentine or straight, as artwork. There is obviously no reason why, ipso facto, the moves of a game should produce a compelling configuration; and adding colour or symbolic coding may not save the day, even if they add a bit of interest otherwise lacking.

Nette Robinson's work however shows that active artistic intervention ("pruning"? "re-wiring"?), can construct order in the chaos, and may re-present the drama of a game in a way that rises above the visual contingency of the moves. She has overpainted some moves to simplify the image, and uses a combination of signs and symbols as indications of the action. The colour assists our reading of the moves - it is not mere decoration. Here is another example in the same style; and it also works sans chess.

Nette's art work will be on display, and sale, at various chess events as you can see from the forthcoming exhibitions listing on her website.

So here's to you, Nette Robinson - good luck, and we'll be following all your many careers (we haven't yet mentioned the belly-dancing) with considerable interest.

Acknowledgements:
Thanks to Nette Robinson for kindly letting us use images of her work, all are her copyright.
Tom Hackney
Dominique Digeon
Ugo Dossi