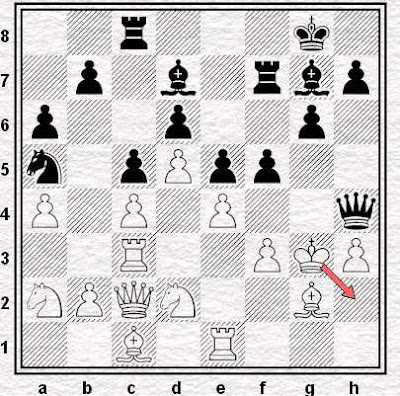 After Hsu's 24 Kh2, I understand why Alekhine sometimes 'improved' his games by substituting the brilliant finish he had foreseen for the mundane conclusion which actually occurred.

In truth Penarth was not a tremendously successful tournament for me. Away from the board I had a great time, but on it I never really got going.

Still, at least it ended well. A pleasing win, albeit it against a modestly-rated opponent. A game that had mostly been about positional pressure on the c-file until a sudden switch to a direct attack against the king right at the death. 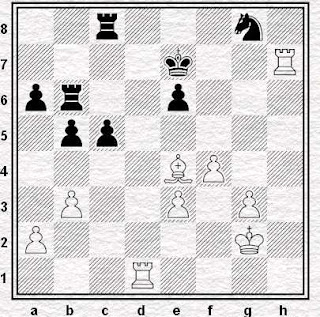 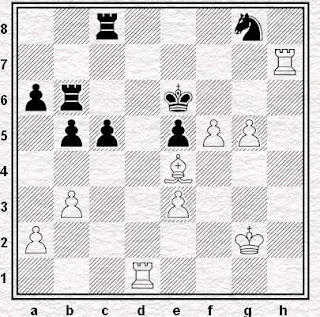 Not a brilliant finish exactly, but certainly a pretty one. 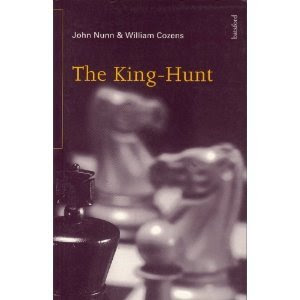 Twenty years earlier John Nunn had suffered more. If his offered queen had been taken he had a king hunt and mate in five planned. That his "spoilsport computer" later pointed out a mate with one move fewer doesn't diminish the brilliance of his conception one little bit.

Disappointing, then, this sort of thing. Annoying, perhaps. Entirely understandable that genius chessers get creative with the scores of their games when it comes to writing them up, even. And yet I wouldn't have it any other way.

When Hsu played 24 Kh2 and when my opponent tried 41 ... Kf8 there were games in progress. Sure they were very near to the end, but there was still chessing afoot. And if you're playing chess and you're not trying to make things awkward for your opponent what are you doing exactly?

Chess, even at the level at which I hack around, is a serious sport.  So you play 24 Kh2 and you play 41 ... Kf8. What you don't do is collude and play 24 Kxh4 or 41 ... Kf6. Yes, you'd get something more spectacular, but if that's what you want it would probably be best if you hang up your pawns, get yourself a subscription to Skysports and start watching WWF. Or go join a circus.

I see there's a problem with the second diagram - looks like the pawn should be on g4 already. I'll fix it when I can - but will be late tonight when I can do it.

Strikes me that in both games resignation was preferable to any move, though no-one ever won a game that way, to be sure.

Oh yes - that's it. The perils of trying to read posts and comment via an iphone.

At least the text is much easier to fix than the diagram, so I've just corrected it.

My play throughout Penarth was characterised by careless blunders. Looks like my posts are following suit.

I think if you're going to get a position you'll resign in anyhow, then you may as well allow the beautiful finish.

Following on from your comment, us Pompey fans sadly have little reason to invest in Sky Sports these days, though recently at times the club could have been mistaken for a circus...

I was once at Fratton Park when Santa came on the pitch. I wouldn't have minded, but Pompey equalised and then got a winner in the time added on for his incursion.