I am giving a simul on Saturday, at El Corte Inglés in Zaragoza. 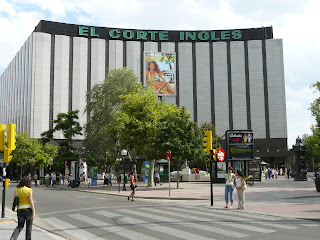 (actually this is a different El Corte Inglés)
I've never really given a simul before. I've stepped in to help, on one occasion, to give the proper players a rest, but I've never actually been invited to give one before now. 45 - as it happens, just a few days shy of 46 - must be unusually late in life for giving one's first simul. Presumably because most simuls are given by people who are good at chess and these people usually develop their talent at a rather earlier age. About three or four decades earlier.

Fortunately, saying "I am giving a simul" rather exaggerates the extent of my involvement, since I am only one of a team of players, some of whom can actually play the game. 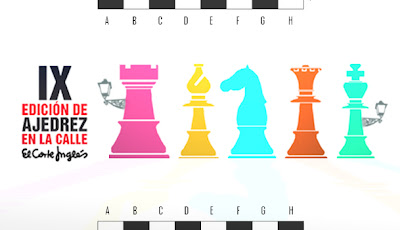 It's an annual event called Ajedrez En La Calle (Chess In The Street, as the simul takes place out of doors) organised by the Aragonese Chess Federation. I'm invited to take part as the reigning champion of Huesca, one of the three provinces of Aragón.

Might be fun. Or might be an absolute disaster in which case I will presumably be forced to flee the city by boat.

I've been on the other side of a few simuls, of course, not that I have any scalps to tell you about. I did once win a prize at a simultaneous organised at the 1983 Candidates' Semi-Finals in London. There was no play in either match that day (in those days players could and did take time-outs) and so would-be spectators were invited to take part in a simul given by the estimable Jon Speelman, an offer I accepted.

I didn't win this game. I might very well have done: I won the exchange 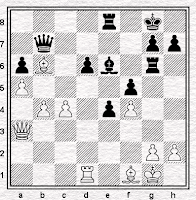 and had I played, the computer says, 30...d5! rather than the asking-for-trouble 30...Qc6 I selected, then in theory at least I'd have been favourite, though in practice it would have been very easy to go wrong, playing a grandmaster.


I nevertheless received the aforementioned prize ... for being the last player to finish. This prize was, you'll be impressed to learn, a copy of Ray Keene's notorious book on the 1978 World Championship match. A book that I already possessed. 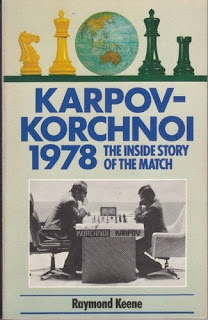 As it happens, I played Ray himself in a simultaneous eleven months later, at Blackwell's bookshop in Broad Steet in Oxford, in which city I was then a student.


I remember, after the game, telling the Oxford Mail reporter that I'd had a better position but I had to go home to finish an essay. Which may even have been true, but that doesn't make it much less embarrassing a thing to have said.

The prize, this time, was the perhaps equally notorious first edition of Batsford Chess Openings, which Ray was touring to promote. 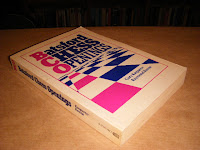 Anyhow, I can't imagine that, in twenty-seven or twenty-eight years' time, anybody will be remembering a simul in Zaragoza in June 2011. Or reproducing the score of a game they played against me.

Loath though I am to be the annoying little tick who points out an engine win, 40...Rc6 appears to win for Black (though it takes a surprisingly long time to resolve, even after Black gets two rooks for one bishop and immobilises the two monster pawns).

I did a simul over 30 boards many years ago against weak players (160 or below) and must have walked 10 miles! I was completely knackered after it and it took several days for the positions to get out of my head completely. Twice during the simul I spotted that two opponents had made an extra move - it was uncanny how the positions were etched into my head and I knew several boards in advance which position I was approaching - I just wish I was able to summon the same level of concentration in a normal game! Still,never again for me but good luck with it! 8-)

I guess it must have been down to him v me by that stage, but even so you'd think that might have been not so hard to see.

Come to that, taking on b6 surely at least draws.

So how did you do?