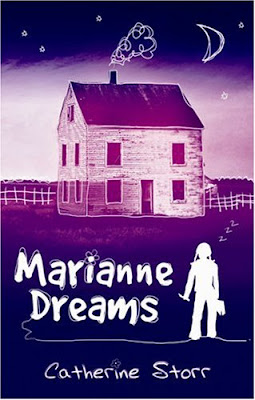 It was in her great-grandmother's old polished mahogany workbox, which now belonged to Marianne's mother. It wasn't used as a regular everyday workbox for darning or mending or dressmaking, but was brought out occasionally for Marianne to look at and tidy up - generally when she was ill and tired of her own toys and books, and needing some extra amusement. The workbox was charming, and Marianne loved it. It had a tray lined with green satin and fitted with little tools with mother-of-pearl handles, for all sorts of elaborate, out-of-date needlework; little satin-covered boxes with mother-of-pearl knobs on the lids, and a space underneath the tray, in which were all sorts of treasures that Marianne's great-grandmother and grandmother and mother had somehow collected. There were buttons of every kind, ivory lace bobbins, mother-of-pearl counters, an odd chessman or two, short lengths of ribbons, buckles, sequins, beads. Among them, this particular time, Marianne found the pencil.

Games were more difficult. She drew something as much like a chess-board as she could manage, with some of the pieces on it as if a game were being played; and she was careful to draw box beside the board the hold the rest of the chessmen. She put in some draughts, because they could use the same board, but it was very difficult to draw things so tiny. She tried to draw a pack of cards, but found it impossible, so she drew a little pile of cards on the table and hoped that her thinking of them as playing cards would make them turn out to be just that.

Her best effort was the bed. She drew a four-poster, having always longed for one herself, and it rather dwarfed the room. Even the table looked small by the side of the bed, but Marianne felt that it didn't much matter, as Mark was, after all, still an invalid and would have to spend most of his time in bed. She drew several blankets and an eiderdown, pillows and sheets.

Food! Mark had mentioned that he would like some decent food. There wasn't room on the table for anything more - it was already overloaded with large chessmen, draughts and cards.

"It does seem a bit crowded," Mark admitted. "What's there, anyway? I saw a lot of boxes and things, but I didn't look properly."

"There's a chess-board", Marianne began. "Wait a minute, I want to make sure of something."

She opened the box beside the chess-board and looked in. There were pieces, she was glad to see. She put them out of the table and counted. With the pieces on the board there were thirty-two.

"Thirty-two. Why? Aren't they all there?"

"Yes," Mark said. He looked slightly surprised as Marianne began to count the pile of cards on the table. "Why on earth are you doing that? Why shouldn't they all be there?"

"Because I couldn't draw them all separately, so I didn't know - forty-one, forty-two, forty-three - wait a minute."

"Yes, it is a complete pack", she announced a moment later. "Good. The the draughtsmen will all be there, I expect."

She looked, and they were.

"Look here", said Mark impatiently, "what is all this? Why are you so suspicious about everything not being there? Who'd have taken a chessman anyway? Why should they? It's not the sort of thing THEY want."

"Who want?" asked Marianne, but without waiting for a reply she began to answer Mark's questions. "Because I drew it. I drew it all, so that you'd be more comfortable. I drew the bed and the books and the table and things - only I'm not very good at drawing and I couldn't draw the things on the table small enough and I couldn't get everything in, and I had to draw a box for the rest of the chessmen instead of drawing the whole lot, and the pack of cards and not each card, so I wanted to make sure they were all there."

"I wish you could get me out of here", Mark said, suddenly gloomy.

"I could try". I could draw you walking down the path away from the house, looking very pleased with yourself."

"But you will be able to. Perhaps if I drew you walking..." Marianne stopped.

"I'd rather not say. Anyhow you wouldn't like it if I did. And I want to ask you something else. Mark?"

"What did you mean when you said the chessmen weren't the sort of thing THEY wanted? When I was counting them?"

Mark looked quickly at the window, and away again. He was suddenly wary.

"He's got enough books", she thought, looking at the drawing of the bookcase, which was indeed as full of books as she could make it. "And chess, and draughts, and cards. I can't think of anything else."

She turned her attention again to the outside of the house. The hills in the distance looked bare. Marianne added tiny trees and a sort of thick pencil fuzz for bushes at the foot of one or two of them. On the top of the highest hill she drew a tower, round and squat, with battlements on top. She had had no idea of what sort of building it would be, but when it was finished it reminded her of a stubby lighthouse. She put slit windows up the walls and an extra dome-shaped top above the battlements, where there could be the light.

"It shines out to sea", she said to herself. "Everyone can see it for miles around."

Marianne had never been in the house for so long before: nor had any time of waiting seemed so endless as the long day that dragged on as she and Mark waited for the night to come. Sitting on the bed, on the floor, on the stairs for a change, they played all the card games they knew, they played draughts, they played chess, they played Monopoly twice through, they even played noughts and crosses. Every now and them one of them would take a quick survey through a window, careful to keep out of sight themselves. The Watchers seemed to be no nearer; but even Mark admitted to feeling their unrest and expectancy. The atmosphere in the house grew tense: both Mark and Marianne became more bored and irritable as time passed and the half-light outside persisted in its pale hard sameness. It seemed as if the dark would never come.

"You can't move your king and castle together after the king has been checked," Mark said sharply as they were playing their third game of very inexpert chess.

"Yes I can! It doesn't make any difference whether he's been checked or not!"

"No, it's one of the rules that you can't castle if your king has been in check."

"I don't! Anyway my father taught me how to play and he knows better than you."

"Then your father simply doesn't know the rules any more than you do."

"He does! And anyhow I'm going to castle," Marianne said, moving the pieces.

"You can't! Put them back and play properly!"

"All right then, I will," Mark said. He leant across and reached for Marianne's king. At the same moment Marianne moved the board sideways to get it out of his reach. Mark's arm caught the taller pieces and swept them to the floor.

"You're obviously," Mark said, in a voice that trembled with rage and sarcasm, "much too young to play an adult game like chess. I should think tiddlywinks would be much more suitable for your age."

He slid off the bed, with the chessmen's box in his hand, and felt about for the pieces that had dropped. Suddenly, in a completely different tone, he said, "Marianne!"

"I can't see properly to pick the chessmen up."

Marianne looked quickly round the room and out of the window and and saw that at last the pale light had begin to fade.Outside it was like a winter twilight: in the room it was already so dark that, as Mark had said, it was difficult to distinguish one object from another.

"It's getting dark!" she breathed.

Mark retrieved the last chessmen and stood up.

"Thank goodness for that. We seem to have been waiting hours. Now what?"

He slid the chessmen back into their box.

"I think we ought to turn the radio on."

"Yes I know. But it could be useful. Don't you remember what you said the first time we heard it? It tells us what THEY are thinking."