I was vaguely following Giri-Domínguez Pérez from Tblisi when it suddenly seemed to me that there was something a bit unusual, or unfamiliar about the ending. 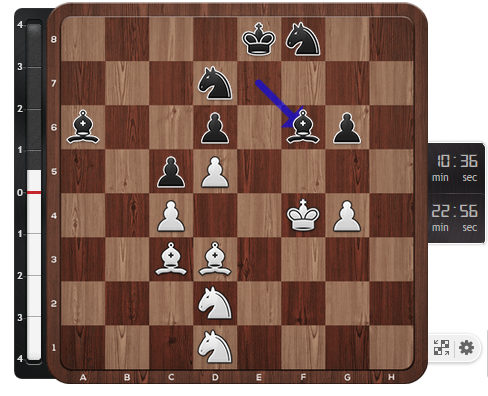 What it was, was that - from move 40 to move 56 - they were playing with four minor pieces on each side. No major pieces, but a full set of bishop and knights. Am I mistaken, or is that a balance we don't often see?

You get plenty of major piece endings, since it's the minor pieces that come out first and get swapped off, which they are always liable to be when there are in close conjunction with one another. But in order to reach a four-minor-piece ending (or a rookless and queenless middlegame, if you will) you need them to leave one another alone on a full board while a file or two opens up - and the rooks and queens to wipe one another out while their smaller counterparts miraculously survive.

It's my impression that this doesn't happen very often. Am I right? And what would happen if you tried to take on Ulf Andersson in a game of no-rooks-no-queens?
Posted by ejh at 7:55 am

I once saw a four-minor-piece ending in a game between Ian White and Chris Beaumont at Torquay. Chris eventually won.

Ulf - you would win on time of course - in a lost position.

I've had four examples in my own games (most recently in the 4NCL last year). A Closed Lopez (major pieces all exchanged down the a-file); a Modern (exchanges on the d-file); a Caro-Kann (b-file) and a Pirc (d- and f-files).

I should probably aim for more of these, since I scored 3½ points from the four games.

They are rather rare, even three minor pieces on their own is uncommon. The practical problem is that it can be difficult to concentrate enough firepower in one place to achieve anything.

A crude database check indicates an incidence of around one in a thousand games.