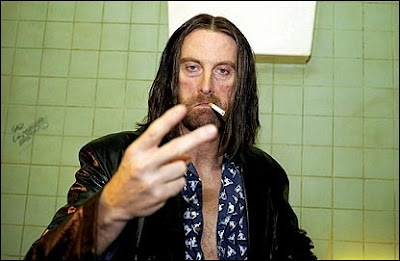 I was surprised to learn, from his Twitter feed, that Ray Keene had been invited to open the 2011 British Chess Championships.

I was surprised for a number of reasons, most of which I'll not go through here on the assumption that they are long since over-familiar to readers. Still, I might just mention that to my recollection, Ray resigned from what was then the BCF, over twenty years ago, rather than repay money he was accused of acquiring illegitimately. (As I recall he then went on to set up a rival, the English Chess Association, membership not very much more than one.)

So one assumes that this is now all settled and the money has been repaid. Otherwise it's kind of hard to understand how come Ray was standing in front of the competitors before the Championships 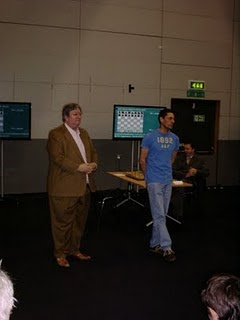 [Image: Andrew R. Camp]
giving an opening speech, before heading back to London with great satisfaction

conceivably at having got away with it once again.

What's odder still about this business is the absence of any reference to it on either the Championships website or that of the English Chess Federation. I mean who invites somebody to open their premier event - and then leaves that totally unmentioned? One might as well forget to mention the sponsor's name.

So you'd think we would have a piece saying "the Championships were opened today with speeches from the President, CJ de Mooi, and Raymond Keene OBE, columnist for the Times and the Spectator and author of several hundred chess books". Strangely, though, we don't. They keep it low-key. So low-key, it's basically invisible.

What's all this about? Lord knows, though it's not the first time that Ray has been a great deal more heavily involved with the ECF than CJ de Mooi has been prepared to admit. But the two of them seem to be quite the mutual admiration society, even if on CJ's part it's deemed politic to keep quiet about his half of the admiration. However you describe it, though, it seems clear that the two of them are on very good terms.

It's my view that, at the very best, this shows very poor judgement of the part of CJ de Mooi, since he's the President of the English Chess Federation and Ray Keene has a thirty-year record of ripping off other people in chess, English and otherwise. Put simply, the association, between our President and Ray Keene, is a tawdry one.

Still, y'know, Ray gives a lot of publicity to chess (or at least his Times column does) and he's raised a lot of money in the past though sponsorship and - like Kirsan - he's never been convicted or anything and yadda yadda yadda. I know how that routine goes and I'm not going to engage with it. Partly because I'm not going to engage with an argument that says that ethics don't matter if somebody might wave some money at you or give you some publicity. Partly because I know from long experience that it's just not worth it.

I'll just say two things that I have said before, and which, no doubt, I shall have occasion to say again. The first is that the reason Ray has got away with it for so long is that people have been prepared to let him get away with it. They've done so precisely because of an absence of ethics, a preparedness to look the other way, to pretend and mumble and say well-it's-never-actually-happened-to-me, which is an identifiable feature of English chess. It's been going on too long for any other view to make much sense. English chess accepts Ray Keene because - to an extent, too great an extent - what he is like, is only what English chess is like. Writ large. Writ very large.


[Ray Keene index]
[Thanks to Jonathan and Angus]
Posted by ejh at 7:55 am

In case anybody wants to refresh their memories regarding the issue that led to RDK leaving the BCF twenty years ago ...

If, on the other hand, anybody prefers to read about how Raymondo won the title in 1971 ...

CJ may have been happy that Ray was opening the tournament, but I don't think anybody much else on the admin team was. Ray managed to annoy the entire office by sitting in there all afternoon and making a loud transatlantic phone call.

It was low-key and, to me, slightly strange.

Both CJ and Ray Keene spoke for just a few minutes each.
There were no microphones and, although I was stood probably not more than ten yards away, I could barely hear.

There were no speeches from sponsors or local dignitaries.

Still, kudos to CJ for attracting such a strong field.

This is the first time I've played in the British for a long time (2003 I think) and have to say I am disappointed in some respects.

The opening 'ceremony' was a joke as Angus alluded to. I was on the second row of boards behind the demo boards and couldn't hear a thing. How hard can it be to get a microphone? CJ is a TV professional ffs, he should know better. And Ray, well, really.

The venue is good but no-one knows we're there. It's the flagship (err, only) ECF event of the year, close to 1000 people attending and not even a banner outside? The National swimming champs is there at the same time, I know they have multi-national sponsors but theyre are posters, TV screens all over the place. How much does it cost to make a banner? £100? We have two cardboard cutout things outside the door inside the venue that must have taken half an hour to make Blue Peter style. Where are the sponsors names? In very small print on some bits of paper is all I can see.

Whenever I play a random European Open tournament there are often posters/signs up all over town!

The live games failed on the first day and have been pretty tempermental since by all accounts. I'm an IT professional and know how hard it is to work with a limited budget (there is nothing from the ECF towards the coverage, is my understanding), can't they even spare a few hundred quid for this? Just take it out of the appearance fees, no-one will notice... Or can't we sell advertising space on the live games page or something, do they know how many hits they get per day? Has anyone even tried this? Instead the IT guys do it with zero budget, have to host it on some tinpot website that crashes under the load after half an hour due to the strain... who'd have thought that could happen?

And don't get me started on the pairing system!

I don't mean to be overly-critical, I am enjoying the tournament, but some simple things that don't cost so much would make it so much nicer and more professional. It is The British Championships, after all.

The internet coverage certainly was a bit flakey at first but has improved considerably the last few rounds (poss not today as I couldn't watch). Unfortunately that's been at the price of cutting down an initially impressive 16 boards' worth of coverage to 4 and then 6.

I have a lot of respect to the guys - whoever they are - who get this to work at all given, as you say, they do it with two tin cans and a ball of string. I do wonder, though, why the ECF don't prioritise internet coverage of their championship. If you *really* want to get publicity isn't that the cheapest/easiest way of reaching a large number of people?

Mind you, The Staunton Memorial had a similarly indifferent attitude to internet coverage too.

PS: as for the pairings, I think I may have quoted you on that in this post.

That's good to know. It happens every year though and other tournaments don't seem to have the same problems. The Staunton Memorial is Ray, so it's a law unto itself.

It is indeed commendable that CJ has got most of the top players out, but what's the point of spending £16k of your own money to do it if you don't tell anyone about it? I don't see anything on Chessbase or TWIC (run by a Yorkshireman!) save for links to the odd blog entry. No reports even on the (otherwise excellent, to be fair) official website, save for Andrew Martin's GOTD videos.

The whole event seems tired and needs an overhaul imo, but I doubt it will happen in the near future.

Maybe I am deluded and it's always been like this, but I think we can do better.