Truth be told, Ray's been cutting down on the old plagiarism since this series began. Very much cold turkey, this was, since it had gone from being an occasional habit, to a regular one, to one he sometimes indulged in almost daily.

Here's the column he wrote in the Times for 10 June 2013 - not long before we rumbled him - in which he annotated the seventeenth game of the 1978 world championship match between Anatoly Karpov and Viktor Korchnoi. 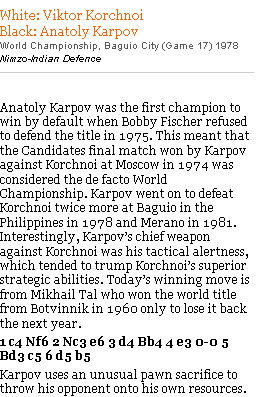 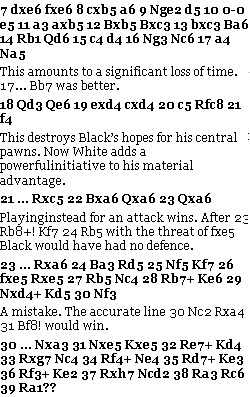 A match of some historic importance, not just in the wider world of chess but in the widish world of Raymond Keene, since it involved the first of his really major offences, cheating on his contract with Viktor Korchnoi in order to write his book on the match. 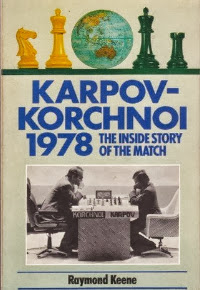 But it's not that book from which Ray has taken his notes. They're plagarised from this one. 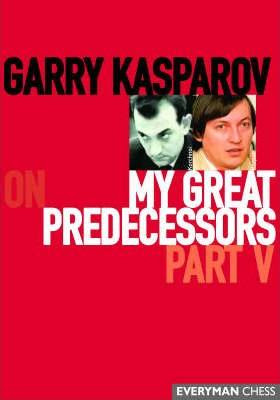 It's the fifth volume of My Great Predecessors, published in 2006. The game was annotated on pages 329-334.

No obvious plagiarism there, though. What's wrong with Ray?

That's more like it. Still, surely Ray can do better? 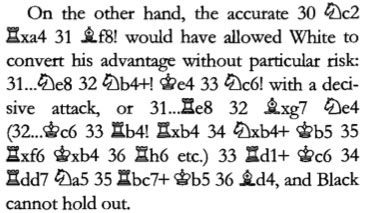 And the mix of word-for-word plagiarism and highly abbreviated notes comes to an end with another example of the latter:

Not a vintage effort, you're thinking, but we thought you might appreciate a shorter one after last week's effort. Maybe Ray, too, wanted to keep things short and some of the original notes were too long for him to fit in to the space with which the Times provided him.

But he still managed to squeeze in plenty of plagiarism. And presumably, in contrast to 1978, he didn't have to make any furtive trips down to the post office to send his copy in.

‘Rumbled’ him – Justin, seriously, all respect for this series, but do you really suppose this wasn’t common knowledge in the chess world already? I don’t follow RDK’s writing closely, but certainly my casual impression was that he hadn’t done original annotations to anything since about 1982.

do you really suppose this wasn’t common knowledge in the chess world already?

Put it this way - if anybody else was writing anywhere, from late 2010 to mid-2013, that Ray's Times and Spectator columns were being plagiarised wholesale from a variety of sources, then I missed it.

So yes, I do suppose it. We all knew Ray engaged in occasional plagiarism and that he'd been known to recycle. But I don't believe anybody knew the scale on which it was happening.

I'm very open indeed to the production of any source that could contradict me on this - I'd genuinely be delighted to know of it.

(I partly say this because one of the aspects of Ray's history that puzzles me is how little he's been complained about. I mean we can go back more than thirty years and there are books which people must have known, and must have seen, were full of recycled notes. But nobody seems to have made any fuss.)

Probably partly explained by the probable fact that hardly any chess players (in the sense of people who interact with the chess world, and particularly the publications therein) have read the Times columns for years, such was the low expectation that anything of interest would be found therein. I'm not sure they even bother to put them up on the media boards at tournaments like Hastings and the British any more.

It also may not be a coincidence that from mid-2010 the Times online has been behind the paywall.

Yes, that last thought had occurred to me (though it's a bit later, 4 December 2010, I think). But still - nobody noticed? Chessplayers will notice if somebody plays a variation that they read about in a theoretical article thirty years ago. Yet nobody noticed that Ray was constantly repeating himself and other people?

(I mean maybe they didn't. The question's not entirely rhetorical. But it's really, really odd, isn't it?)

... we can go back more than thirty years and there are books which people must have known, and must have seen, were full of recycled notes. But nobody seems to have made any fuss.


I suspect part of the answer here is the woeful standard of book (and later DVD) 'reviews' in the chess press.