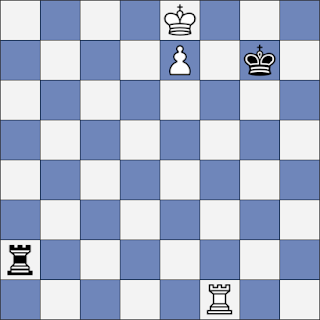 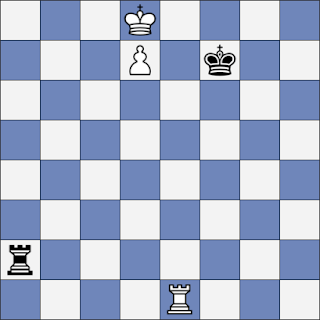 ... in the end it all comes down to ensuring adequate checking distance.
John Nunn, Secrets of Practical Chess

It was Tarrasch's idea. To put these two diagrams side by side, I mean. I first saw them like this in Emms' Survival Guide and at some time in between those two authors published their books Keres (and no doubt many others) did it too.

'Checking distance'; 'checking room'; 'distance effectiveness'. Call it what you will, it's probably the single most important principle of rook and pawn against rook endings there is. And, yes, I am including 'rook behind the pawn' when I say that.

Checking distance is important in theory and often determines the outcome of games in practice. As we'll see, it was Black's lack of understanding of the concept that cost him a win in the Stephens - Balaji ending from the British Championship which we looked at last week. 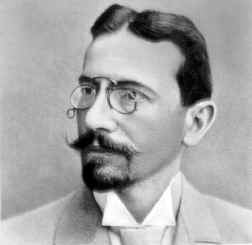 
Rooks are long range pieces. I've read that in a million different places. What it seems to mean when there's only one pawn left on the board is that it's usually best to keep your rook as far away from the enemy king as possible. Then you can still throw in your checks as and when necessary, but you're far enough away that the king can't harass you in return.

So where's the line? At what point does 'far away' become 'far enough'? Turns out it's three squares.

Take a look at the diagrams at the head of today's blog and assume it's Black to move. In the one on the left White can't stop the checks unless he takes his king to the queenside which will leave Black free to eat the pawn. In the one on the right, though, White's king will gain a tempo which is just enough to be able to force his pawn to the queening square or win the rook.

It's not just a side-to-side thing either. It's up and down as well. Open up The Book and you'll see Levenfish and Smyslov's introduction includes these two diagrams. Actually they have them without the black king on the board which rather emphasises the point that, once again, with enough room the black rook can stop the pawn by itself. 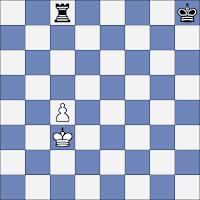 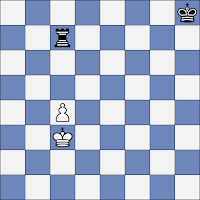 So much of the theory of how to play rook and pawn against rook positions rests on checking distance it's almost impossible to overstate its importance. Not Philidor maybe, but practically everything else. The short-side defence, Lucena (both winning it and getting there), Ending 57. All these 'fundamentals'  are built on a foundation of checking distance. By extension, all the more complex positions that can be reduced to the theoretical ones must be too.


And so, after the theory, we finally reach the practical. Stephens - Balaji, British Championships 2013 (3). Black is about to play 78 ... Rc1. In one sense there's nothing wrong with this move - Black's still winning after all - but we're trying to queen that pawn aren't we so why not just 78 ... d3?

Check Nalimov and you'll see that after the move played in the game mate is only three moves further away than after the pawn move that I'm suggesting as an improvement. To focus on the number, though, is rather missing the point. There are only two squares between White's rook and Black's king so we know it doesn't have checking room. It can't hurt us. So if there's no need to block a check why bring the rook to the c-file at all?

Balaji's move isn't some kind of chessicle snake that will send him backwards a few moves. Rather, with ... Rc1 he's taking himself off on the wrong track altogether. One that will eventually take him over the line from 'win' to 'draw', but not before he misses one last just chance to get back on the right road. 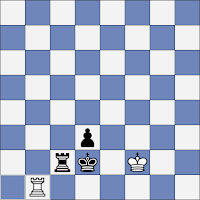 It could have been different. For the Stephens - Balaji endgame, just like a lot of others, the result came down to checking distance.

I saw another player rated 211 BCF fail to defend by the third-rank method at the 4NCL rapidplay on Saturday.

OK, seconds on the clock, pressure of playing a GM, etc, but still. Obviously there are far more players who don't have this ingrained than I would ever have imagined.

I wonder if there are just as many players who can't defend king and pawn against king? A year ago I'd have said that was pretty much on the same level, but probably I'd have been wrong.

Ok, guilty as charged, ECF185 and before your series of articles I'd never heard of the Lucena, checking distances or the Philidor position. However I did pick up some opening books at the British...

Where to start? Get my hands on any old end game book by Nunn / Tarrasch / Emms ASAP and learn the basics that I should've picked up as a junior before I get humiliated? Which do you think is best?


@John: I did once win a drawn K&p v K position against a strong player in a blitz finish. Putting your king on the wrong square in a panic with your flag hanging is one thing, misplaying Philidor is another. I'm not sure how you could do that assuming that you knew it. Pressure is a funny thing, though.


@Dan: just goes to show that everybody has to find their own way. I'd never thought about the point you raise - perhaps because I tend to think of the rule of three by seeing the Tarrasch picture. Whatever works for the individual I suppose.


@Adam: The best single source for rook and single pawn against rook that I've found is still Levenfish and Smyslov. Some of the analysis is out of date - but not much and read in conjunction with a table base I think it's a really good grounding. Much more than any amateur needs really, I suspect.

For a more manageable introduction to theoretical rook and pawn positions, the best source I have come across is de la villa's 100 Endings You must Know. I know a lot of people swear by Dvoretsky's Endgame Manual but I've not yet managed to add that to my collection.

I don't think I knew about rook to the third rank until Angus French showed me during a tournament in the Czech Republic in 2005. My Elo was in excess of 2100 and my age just a few months shy of forty.

Seriously?? How come? I mean, this endgame must turn up once a fortnight or so on the ICC (and equivalently frequently in friendly games, club games, or wherever). Did you just used to lose it every time and shrug your shoulders, or what?

It's not that I think people *ought* to know this - there's no ought about it. I just can't understand how one plays enough chess to become 2000 Elo or whatever without picking it up somehow.

Dunno really. I knew Lucena as a kid. Never got much further, I guess. And I'm really not sure it ever did come up in practice, though since I played hundreds of games in between learning Lucena and 2005, that seems an unlikely claim.

(Not on the ICC though. I don't think I've ever played there.)