Lots To Do With Chess, After All 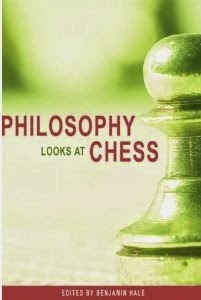 Jonathan B blogged the cover back in October suggesting, in his headline, that it had apparently got something to do with chess. One commentator, Paul C, took the trouble to check out a free chapter on Amazon remarking that it "seems a serious work, but clearly for philosophers rather than chess players." Curiosity now aroused I went one step further and - click - bought it, hoping to investigate whether that "apparently" should have been a "really".


It's a diverse collection of essays (published in 2008) by philosophers; "a gallimaufry of writings..." says the editor (Benjamin Hale, Assistant Professor of Philosophy at the University of Colorado, and avowed chess addict) "...that relate playfully to the game of chess". So, the question that springs to mind (apart from "What is a gallimaufry?") is: "Those philosophers, do they know the chess of which they speak?" Well, the twelve contributors are detailed at the end of the book: all are academics, nine mention chess-playing, of whom six, though not GMs, are obviously familiar with the game and its culture: one is a former US junior champion; another, our own Peter Morriss, was a doughty competitor in the British Seniors last year. So, yes, apparently these philosophers do - though maybe not the one who starts their essay with the alarming "I have never played a game of chess".

The first chapter (by Bernd Graefrath, ICCF player, problem setter and judge) certainly demands a high level of chess comprehension, and then some. It is a discussion of retro-analysis, in particular in the work of Raymond Smullyan, another Philosophy Prof., and is definitely something to do with chess, as Jonathan unequivocally pointed out here (and - click, click - I bought that, too: hey, it was Christmas). It is chess; but as if seen in the rear-view mirror.

In many of Smullyan's posers the key move(s) seems almost beside the point, as the proof is the best bit - the proof is the pudding - and this delectable dish is spread over the best part of two pages of Graefrath's essay. Personally, I am full of admiration for anyone, Sherlock Holmes, for example, who can solve these things - but then I am in dumbfounded awe of anyone who can set them in the first place.

Graefrath suggests that solving such an apparently intractable problem illustrates the human capacity for "cognitive optimism" - that the application of rational thought will lead to the promised land. Though he suggests that Smullyan himself had his doubts, and the following problem, where the terra firma of certainty is tantalisingly just out of reach, shows his pessimistic side.

Look away now if you want to work it out unaided, and come back at the end of the next paragraph.

Which is pretty much how Smullyan puts the solution in his book. Graefrath puts reverse swing on it, so to speak: whatever White does in the future (with their first move) creates the conditions for Black to propose a different past (their last move) to defeat that particular mate. Definitely got something to do with chess; but a bit of a pain in the epistemology.

After this kick up the fourth dimension the next few chapters wrestle with the impact of computers and claims of Artificial Intelligence, surely the philosophical-cum-chessical issue of our time. It all started with the Turing test in 1950 (he, the WW2 code-breaking genius, and victim of post-war homophobia, now officially "pardoned"). Scribble a question for the Box and pop it in (no voice recognition way back then). Out comes a chit with its answer. If you can't tell the difference between the Box's effort and a human's, then there's AI in there (so, approximately, said Turing, as I hope I'm right in saying). Except, interjected philosopher John Searle in 1980 (as we are told), are you sure you'd want to say the Box understood? The debate rages, in philosophical circles at any rate, and the two relevant essays should be of interest - and comprehensibility - to the philosophically inclined, though the conclusion of the second is worrying for the chess player.

Thus, the argument runs, with the usual chitchat you might be a little reluctant to say that the Box understood what it was "talking about" - words, so the Prof says, are about something. But if it was decent chess moves going in and out, it might be a different kettle of fish: chess moves aren't about anything else but chess, so the bar for calling it "understanding" is lower. You might, then, acknowledge that Fritz, or whatever, actually understood what it was doing as it duffed you up. Scary. But for me you'd have to get the Box to do something really smart, like set a retro-problem needing two sides of proof, before I'd call it Brains.

Next there's an essay by serious player John Hartmann which seems to be describing to a non-chess playing readership (many philosophers included, presumably) how modern day (i.e in 2008) chess professionals use computers in preparation and analysis. Such is the intimacy of this symbiotic relationship that, in Hartmann's startling conclusion, Kasparov (in his playing days) was a Cyborg ("a product of human and non-human actors") and, who knows, maybe you are one, too.


And then yet more meditations on the nature of the human chess player, with the spectre of the computer still haunting the board. You might feel that in Evan Selinger's essay you are in the realm of the bleedin' obvious when you read about chess players suffering from nerves, feeling emotions and the like...but there is some interesting stuff about "being in the zone" - oblivious to all else, like an elite athlete - when playing. It is possible, though, to exaggerate this ecstatic one-ness with the game, as there may be competing distractions. Thus philosopher Selinger quotes WGM Jennifer Shahade quoting GM Alexander Shabalov saying that during most games he thinks "about girls about fifty to seventy-five percent of the time". If Shaba's in a zone, would it be the boyzone?

I won't attempt to give the flavour of the all essays in the book. For one thing, I didn't understand some of them (by a long chalk), but here are some titles that may whet your appetite: "Chess is Not a Game"; "Quiet, Please! There's a Game Here...". But, I did manage Stuart Rachel's (a former US champion) engaging and non-technical musings on the dark side in "The Reviled Art"; and mention must also be made of two others. First Tommy Curry (avid Blitzer and openings analyst) black and proud in "Hip-Hop Tactics: A Culturalogic Expression of the African's Aesthetic Role in Determining the Basis of Creativity on the Sixty-Four Squares of Warfare" (an eye-catching title, but not a pretty one).

He proposes that there is a specifically African (i.e. black, or black African-American) way of playing chess. This must be the most contentious essay in the book - over which the editor keeps his distance as follows: "Such generalization seems illegitimate - indeed, sweeping.... Whether you buy his [i.e. Curry's] argument or reject it wholesale, his essay, to my mind, brims with enthusiasm....". Here is a taste of Curry cookin': "Hip hop is life - and this life - this rhythmic style structures the dynamic flair African people display at the game of chess." In this way of looking at it black is definitely OK; with such bazzazz how could they lose?

Next (and last for this post) there's Peter Morriss's piece about chess and ethics. It is highly accessible, and he holds our interest because he talks, as a chess player, about the game as we play it. In addition he gives a decent amount of space to de Groot's famous study of chess-player thinking from so long ago now: 1946. As Peter says, it's astonishing that de Groot was able to assemble such a star-studded sample: Alekhine, Euwe, Keres, Flohr, Fine, and Tartakover.

Peter's main thrust is that how chess players chose a move provides a plausible analogy for how people chose a course of action when confronted, in real life, with an ethical dilemma. The philosophers' word for it is "casuistry" (and consequently the essay is headed "Casuistry and Chess" - not a contender, obviously, for a Whacky Title Award). "Casuistry"? Long before some dodgy Jesuitical practices gave it a bad name the term meant (Peter explains) simply deciding on a case by case basis. So: no dogma ("Thou shall not kill." "Doubled pawns are weak."), just analysis of the concrete situation on the board, or of a muddy quandry in life, with maybe only some hand-me-down "maxims" as a guide. And, I suppose, no Gods to help either - unless He be John Watson (the chess analyst, not Sherlock's sidekick).

It is fascinating stuff and manages successfully to explain both a bit of philosophy to chessers, and a bit of chess to philosophers. Let's quit now while we are ahead by drawing a conclusion, one that Peter is quite reasonably, as a philosopher, reluctant to spell out in his essay: if chess elucidates how people decide the big issues, like right from wrong, it must mean that - as we chessers have always told ourselves - our favourite game might truly serve some higher purpose. Hallelujah.

So Philosophy Looks At Chess from some unusual angles. Somehow we missed it in 2008, though it didn't pass unnoticed by others - for extended coverage the first time around see this review in Chessvibes (and don't miss the exchanges in the comments on the Curry essay, including from the author himself). And talking of unusual angles: well done Dominic Lawson and colleagues (including Dave Edmonds, once of this Parish) for the accessible Across the Board series on Radio 4 a week or so back which managed to make chess seem generally normal, and to serve, occasionally, that higher purpose.

You might feel that in Evan Selinger's essay you are in the realm of the bleedin' obvious when you read about chess players suffering from nerves, feeling emotions and the like.

In my experience the emotional aspect of playing a game of tournament chess is usually completely overlooked by non-chessers - and often chessers - who, for reasons not clear to me, definite it as a game decided by intellect.