The twelve rook and pawns of Christmas: Solutions (part two) 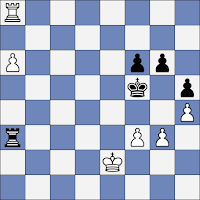 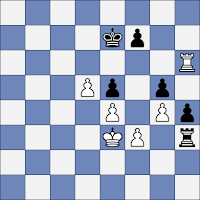 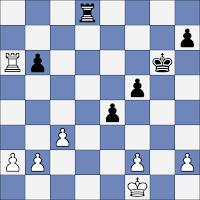 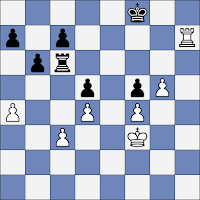 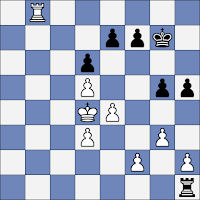 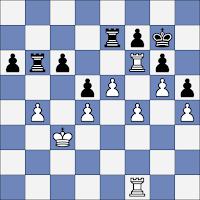 Today it ends. The second and final part of the solutions to the twelve rook and pawns of Christmas. 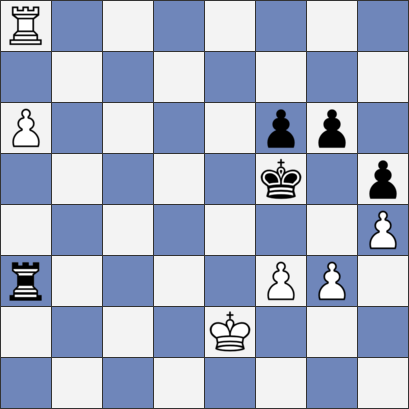 As Roger pointed out, this is Unzicker-Lundin from the 1954 Olympiad and it's a Blue or Red Pill? moment. It's also an example of the value of pattern recognition even, or perhaps especially, when it's not a conscious process.

So push the a-pawn or not? Play a7 and you completely disable Black's pieces (rook has to stay on the a-file to watch the pawn, nothing can move on the kingside without allowing a check and a8=queen), but you also lose a hiding place for the king. Kd2-c2-b2-b3-b4-b5-b6 and Black can just check it away.

As it happens 49 a7! does win outright. Hawkins explains this on the bottom of page 273 of Amateur to IM.

"Yes", I thought when I first saw it. "You just play a7, put your king on h6 and then sacrifice the a pawn to win on the kingside". After a few minutes thought I couldn't see any flaw in that plan so I turned the page ... and discovered that I was exactly right.

Frankly, I was more than a little discombobulated. I was absolutely sure that I hadn't seen Unzicker-Lundin before, and yet also very much aware that I simply wasn't a good enough chesser to just instantly get solutions to puzzles like this.

A week or two later I was leafing through Emms' Survival Guide and came across Fernandez Garcia - Kotronias, Dubai Olympiad 1986, a game I had looked at several months previously and then completely forgotten. Or apparently not. 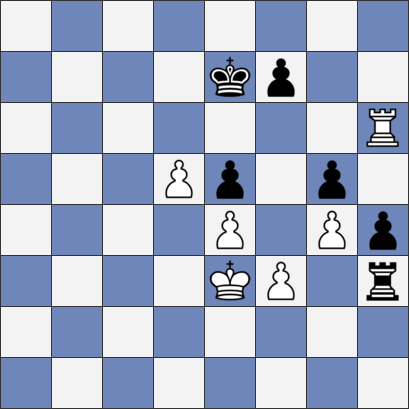 
Fisher-Sherwin, Portoroz 1958. Black's 78th is the famous blunder which tosses the game in when it should have been drawn and Bobby's 83rd is also worth a look.

The position back at move 60? I'd never seen it before I stumbled across it in Levenfish and Smyslov. Surely it's impossible for White to win this one? Well without help it's unlikely, true, but that's far from the same things as out of the question - even at the highest levels. Magnus doesn't have the patent on grinding out victories from unwinnable endgames, it seams. 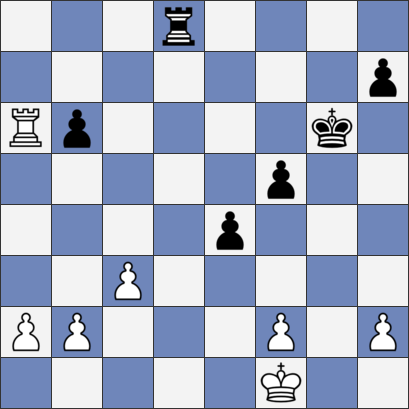 If there's one thing that everybody knows about rook endings - even the folk who know absolutely nothing - is that it's important to keep your rook active. There are limits, though, aren't there?

I'm quite sure that most chessers (although not Angus, it seems) would have played either ... Rd6 or ... Rb8. Either way Black's going to lose. Pretty obviously ... Rd2 is the move that should be played, but surely not when it drops a pawn with check and gives White three connected passed pawns. No way that's playable.

Except that it was.

By the way, in the comments John Cox misremembered this position as a Smyslov game. When you see them side by side you can understand why. 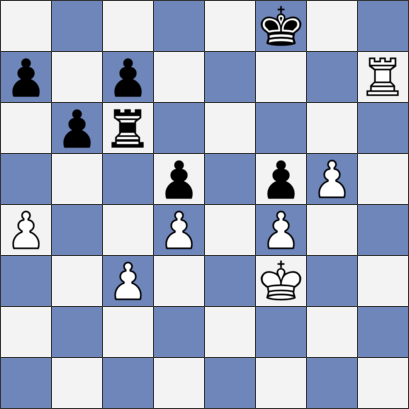 As many spotted, this is Capablanca-Tartakower, New York 1924. Another Active Rook story, albeit for the attacking side this time. 1 Kg3 was Capablanca's choice here, and 1-0 in due course - although  in the comments box Roger (Emerson) tries to whip up some counter play for Black

Years ago there used to be a programme on the tellybox on Saturday nights called You Bet! The details are rather hazy in my mind now, but as I recall what used to happen was that,


And then around we'd go again.

I mention all this because one week Matthew Sadler was on it. His challenge was to identify several dozen different chess positions - both players as well as the venue and year of the game - within two or three minutes.

I always meant to create a rook endings version of the You Bet challenge. Never quite got around to it, though. If I ever do, I'll have to include Capablanca - Tartakower, I think. 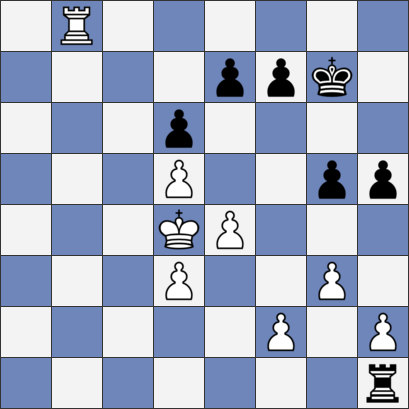 If you're trying to understand something complicated, it's important to name things. A label - a good label, at least - definitely helps with recall and comprehension. A good label being something personal that captures meaning for you regardless of whether it's generally accepted terminology (hence The Rubinstein Method, which was the first post in a series that never got off the ground).

Take g2 (often g3) - g4 in the endgame. It crops up fairly frequently when there are just rooks and pawns left on the board too, one example being the 4 v 3 pawns on the same side ending that I didn't go for against Keith Arkell at Penarth. 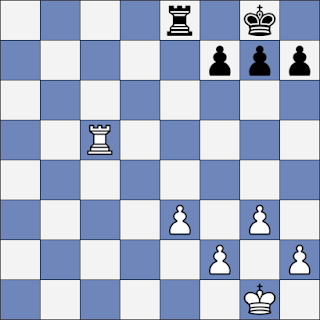 This idea of playing g2(g3)-g4 in endgame to restrict Black's pawns I started to call Ulf's Spike after noticing Andersson playing it in many of his games. 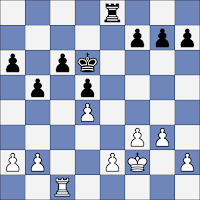 
Not that Ulf's Spike plays any part in the eleventh rook and pawn of Christmas. It's just that I wanted at least one of the twelve to be an Andersson game, and this one is it. Andersson - Larsen, Stockholm 1975. Ulf played 1 Re8 and went  on to win the game although the winning method looks incredibly scary to my eyes. 'You shouldn't mind losing your h and f pawns' says Roger E, but if I had that position in a game I'm pretty sure I would mind. Which is one of the many reasons why I'm no Ulf Andersson, I suppose. 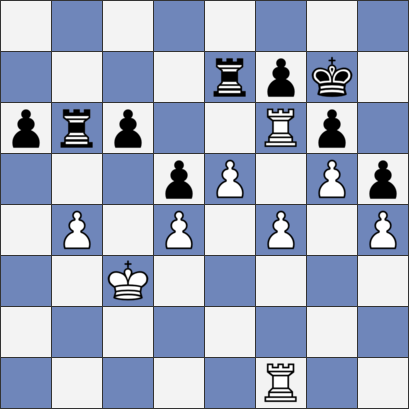 And we come to the end with a double rook endgame position. Do they really count as rook endings? I've always wondered. Obviously they are in one sense, but often the presence of a pair of rooks throws up stuff - mating attacks and whatnot - that you simply don't get with a single rook.

Anyhoo, this one I found in Hilton and Ippolito's Wojo's Weapons (volume 1). The game it's taken from is listed as being played against 'N.N' and may have been played in 2004, or maybe not. Oh and the score ends at move 50 because "The rest of the game has been lost". No wonder it doesn't show up in the databases.

The more obvious defence for Black is 2 ... fxg6. Apparently that wins for White too. I'll leave that solution to you and your processors.

Re ....a6 instead of ...Rf3 in Capa-Tarta (Roger's suggestion in the comments); I spent hours analysing this when I was about 14 - at one point I even thought Black could draw and I was fantasising about being the analyst who 'refuted' the received view of a famous ending. Years later I found out (I think in Dvoretsky somewhere, although I knew vaguely of it before then somehow) that this move had been suggested in Shakmatny Bulletin in the fifties by some anonymous Soviet analyst and had sparked a lively correspondence culminating in a line stemming from Igor Zaitsev which is supposed to show convincingly that White still wins. I forget what it is. By eye it does look to me as though White should still win.

I must say I can't imagine too many strong players not playing Roob's 1...Rd2; it's obviously the first move that comes to mind and it doesn't take long to see that White can't just queen with a4-a5 etc, and if he can't do that then Black's counterplay is obviously strong enough that White's going to have to bale out. Plus the fact that 1...Rd6 obviously just loses a tempo - you aren't going to be able to defend passively, so if your counterplay doesn't work now it's never going to work.

On which theme by the way I'd just like to out RdeC as an IFE player at the recent Shropshire Open.

An incredible error by Sherwin too pre-quickplay finishes.

To be fair, of course, Sherwin probably had to work it out. Everyone simply knows this ending now and they know it precisely because of games like F-S. I saw one of the Ukrainian kids - Zhigalko maybe (strictly Belarussian I know but playing for a Ukrainian team) draw this exact ending at Rethymnon against some GM in 2003 at the age of about 12, and he just played instantly - clearly he thought it was an elementary matter of knowledge, and to him it was. It's easy to confuse knowing more with being a better player sometimes.

I must say I can't imagine too many strong players not playing Roob's 1...Rd2

Yes, no doubt. But I'm pretty sure that most players of my strength and below would try to defend the pawn and hold on somehow. I had a rook ending in th e London League several months ago where my opponent put his rook in a very passive position just to defend some pawns.

And tomorrow back to raymondo no doubt.

Watch it or I'll start up the rook endings again.

Of course the dream post is a Ray Keene Rook Ending, but - and you can trust me on this because I *have* checked - there aren't as many as you might think given his playing style.

Re Keene & Rook endings, there's this one.

Without attempting a detailed analysis, shouldn't White have been able to draw this? The annotation suggests 26 Re5+ as a mistake and the engine concurs, preferring 26 Rf7.