Nice work if you can get it II

Another gobbet from Dominic Lawson's New In Chess article, part of which we looked at yesterday. 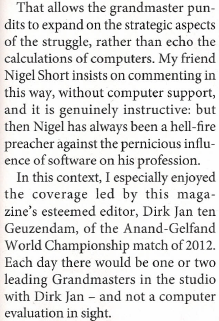 Now Dom and Nige go a long way back. It was Dom who pointed Nige in the direction of Ray Keene in 1993 and who wrote an admiring book about Nige during the world championship match that followed. Dom was subsequently editor of the Sunday Telegraph, during which time Nige was his chess correspondent.

Well, in a meritocracy it's important for friends to help one another out and I'm glad to say they've stuck at it to the present day, since Dom didn't become ECF President without Nige putting in a word on his behalf - and shortly afterwards, Dom pops up writing one of his will-this-do efforts for the chess magazine in which Nige has a column, putting in one admiring word for his old friend and another for the editor.

All very cozy and, to be fair, nothing out of the ordinary for the world of chess (or even the wider world we live in). But with all this mutual back-scratching and seeing our old mates all right, is it any wonder that journalism in chess is so tenth-rate - and so complacent about it?

Hi, I just want to "+1" your remark, "in a meritocracy it's important for friends to help one another out." This is absolutely true and is something that people often seem to have difficulty understanding.

As I wrote awhile ago, meritocracy is the idea that, if you have merit, you get to run things (that's the "ocracy" part of it). And what's the point of running things if you can't get goodies for your family and friends. As James Flynn points out, the promotion and celebration of the concept of “meritocracy” is also, by the way, a promotion and celebration of wealth and status--these are the goodies that the people with more merit get.

So, good on ya for pointing this out.

Not disagreeing with the general thrust of the post, but it is not so obvious that Lawson's book on the 1993 match did so many favours to Short. See, eg, Nunn's book review.

That's interesting, Jonathan. I've not seen it - where would I find it?

Alas, I don't know how to find it now. I think it was originally published in CHESS sometime in 1994 but could be mistaken. I remember Nunn drawing attention to passages suggesting that NS was almost incontinent at times, and his (and other GMs') tendency to use sexual metaphors when analysing and indeed more generally.

He might - but I am less sure about this - have also drawn attention to a passage in the book suggesting that Short's team considered inviting to the match a French woman with whom GK was apparently besotted, in the hope it would distract him. But they didn't go through with it. Not because it was a stupid plan in general, but because they felt they couldn't bear it if GK were actually to bed the woman.