Chess is to be made a compulsory subject in Spanish schools.

Or rather, "Chess is to be made a compulsory subject in Spanish schools",  as Stephen Moss told us in a Guardian article last week, linking to a piece does indeed make that claim:


chess is to become a compulsory subject for Spanish schoolchildren.

Another authority advancing the same proposition is the World's Worst Chess Correspondent, whose Times column for February 11 declared that


the Spanish Parliament is predicted to vote through measures which will make chess lessons compulsory in all Spanish primary schools. 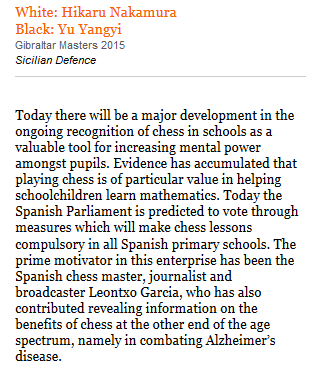 Ray credits this development to Leontxo García, who in addition


has also contributed revealing information on the benefits of chess at the other end of the age spectrum, namely in combating Alzheimer’s disease.

I'm not quite sure that this is right, not least because the meaning of "contributed revealing information" is unclear to anybody fluent in the language, but at any rate we expect to return in the near future to the subject of Leontxo, Alzheimer's and what precisely Sr García's information on the subject might be worth. In the meantime, though, it might be worth seeing what that gentleman had to say in an El País article he wrote earlier this month, in which - if chess actually had been made compulsory in schools after a campaign he himself had led - you might have expected him to say so. But he didn't, because that's not what actually happened.

What did actually happen is that a Parliamentary resolution, calling for chess to form part of the curriculum, was passed with all-party support. It does not have the force of law and the term "non-binding" appears three times in García's piece to reinforce that point. So far, absolutely nothing has been settled, decreed or decided.

This doesn't mean that chess won't become a school subject in Spain. It may very well do so, since the question now comes before the relevant committee in the Ministry of Education which does have the power to make changes to the curriculum, and as García put it in another El País article last Friday (I'm afraid you'll need to read Spanish for this one) it seems "improbable" that parties which voted for the chess resolution will vote against it there.

Well, maybe, Leontxo, but I'm wondering whether practical questions might arise, like for instance who is going to teach it*. Problems like that can conceivably be resolved, but while García reckons that the chances of the Ministry taking a favourable view are pretty good ("la probabilidad de que el ministro muestre una actitud favorable parece alta") I will prefer to be sceptical for now.

Still, it's not my scepticism or García's optimism that's the point. It's that the story as reported - that chess "is to be made a compulsory subject"- isn't right. Not yet and perhaps not ever.

It's not a nonsense. It's not a candidate for Department of a Likely Story. But it isn't right either and it takes only a little careful reading to appreciate that. Which is obviously more - far more - than we can expect from Ray, but a little less than we might expect from anyone else.

[* My wife, who taught in Spanish primary schools for a dozen years (and still works in them, as do I)  is particularly keen to make this point.]

A very good question indeed (say a person who makes his living coaching chess). There are various solutions to the problem - and as and when I have more time I’ll write them down - but essentially there are two difficulties to solve:-

Teachers - with some exceptions - have neither interest in chess nor the time to dedicate to learning how to teach it. They do, after all, have quite a bit else to do and it’s hard to imagine chess ever being their top priority.

On the other hand chess players - with some exceptions - know about the game but lack teaching skills and the time/interest to go about acquiring them.