The series Brixton Byways set out to describe the ancient history of the Brixton bit of the Streatham and Brixton Chess Club combo, insofar as we have been able to reconstruct it. By episode 6 we had got to the end of the 19th century, just tipping into the 20th, and about as far as we then wanted to go, when the series morphed into the ancient history of the Streatham bit. Further surprises arrived: especially for current members of the Club (your blogger being one). It seems that Streatham CC went back further that anyone had supposed.

Now we return to Brixton again. Back, in fact, to where we started. But in order to backtrack we need to go forward and follow the club into the 1920s.


To recap: we left the Brixton CC at the beginning of the 1900s, at the Prince Regent, its venue overlooking Brockwell Park.
Thus the centre of gravity of the club had migrated over the decades to the south east corner of the district, having left North Brixton - near enough to Kennington - a long way behind. Indeed in January 1900 the British Chess Magazine had reported the formation, as if to fill the gap, of a Kennington CC. Its name lives on in the Surrey County Chess Association's Slater-Kennington Cup - a splendidly ornate Edwardian silver trophy (actually EPNS, and now scarred by 90 years of service) bearing the names of several S&BCC players over the years.

It is not clear when Brixton CC (as it was then) left the Prince Regent, but maybe it was a result of war-time disruption, as,  in November 1920, the British Chess Magazine reported that the Club AGM that year, chaired by the President Mr.F.J.Robinson, had just taken place at its venue at 141, Herne Hill. From the Prince Regent it was hardly a quarter of a mile along the Dulwich Road to Herne Hill village and its station, turn left, and up the hill, for even less, to 141, which is on the right. Observant readers will know that the blog has passed this way before, twice.

Whatever there was at 141 Herne Hill in 1921, it doesn't exist today; the old maps show a large house with a substantial footprint, and Kellys list Brockwell Park College (Principals: the Misses Luson) at the address.

The College had a half page ad. in the 1923 edition showing it to have been a private crammer for young children of aspiring parents. It was listed as such, in those Directories that I have been able to search, from 1918 to 1933. Another operation, the South London Institute for Music (Principal: L.C.Venables), appears at the same address in 1923 and 1926 only - not in 1918, nor in the 1920 Post Office Directory. This suggests that the Misses Luson were renting out rooms: to both Mr Venables of the Institute, and also to Brixton CC. Regrettably, according to the best available records, neither he, nor the Misses Luson, appear to have been members of the Club.

Brixton CC met, reported the BCM, every Monday and Thursday 7.30 to 11.00pm (Hon Sec, Mr C.E.Vincent of 39, Aysgarth Road, S.E.21 - a tidy little terrace in Dulwich Village); and in the 20s it was thriving. By the end of the decade it would have 50 members including, in 1930, Harry Golombek, British Champion in 1947, 49 and 55 (as we are delighted to find an excuse to mention). However, at the beginning of the decade the Club was to continue the time-honoured tradition (one sustained also by countless others) of changing its venue, yet again. So, in April 1921 it was back down the hill once more, to the Half Moon Hotel, Half Moon Lane, at the bottom. It is an imposing late Victorian pile, built in 1896, now Grade II* listed but suffering after a disastrous local flood in 2013.

The announcement of Brixton CC's move on April 7th 1921, along with a change of Secretary, was to be found in the BCM. Mr Vincent was, after service of "many years" (another ubiquitous tradition), standing down. Harold Brown (of Chadwick Road S.E.15 - which is more Peckham than Brixton) was taking over. The club marked the change of venue by inviting Snosko-Borowsky (sic) to give a simul. on Thursday April 21st, and in the Autumn the Half Moon Hotel was judged commodious enough to accommodate the AGM of the Surrey County Chess Association, which now boasted an impressive 612 members in clubs across the county (BCM 1921 p 406). Not all of them would have come to the AGM, obviously - in spite of the attraction of a gentleman's night out afterwards in the drinking dens of Brixton.

1921 was indeed a momentous year for the club, and by way of celebration it held a Garden Party in Saturday July 23rd at Inglewood, Denmark Hill (BCM August 1921 p 296), with an entertainment by the Peckham and District Co-operative Choral Society which "gave several part songs which were much appreciated". There was also a lightning tournament of 28 entries won by H.G.Felce. It was a resounding success for which Mr Brown (he with the Peckham connections) was to be congratulated.

It seems a reasonable guess that the venue was Inglewood House, Grove Park, just east of the Denmark Hill main road (a long continuation of Herne Hill running north through to Camberwell). 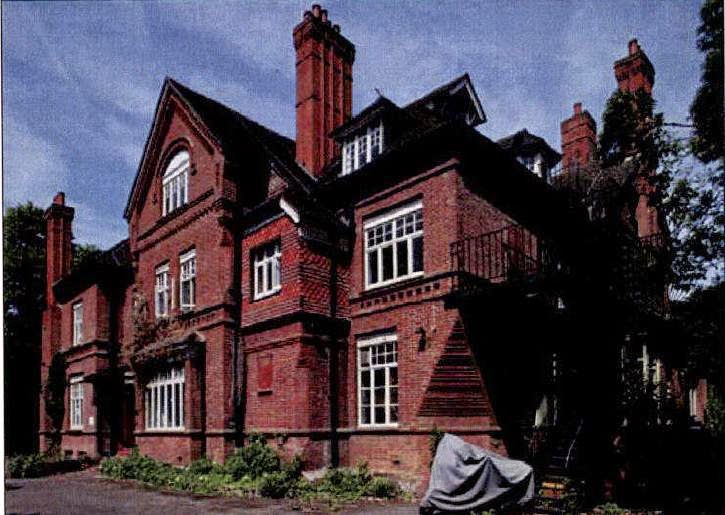 This sturdy Victorian villa, built in the 1870s/80s as a private residence, looks just the sort of place for a garden party - especially as it stands in 4.5 acres, and clearly has plenty of room, even a conservatory perhaps, to pop inside when it rains. The snag is that according to a London Borough of Southwark planning document here (from which the photo comes) it was already a nursing home in 1921. But apparently, and unlike as it would be today, business was slow; and so (to salvage our venue theory) maybe some income from social-eventing would have been helpful. They used it for barrage balloons in WW2, before Bletchley Park took it over as a listening post (and that's the second mention of Bletchley Park on the blog - the third if you count the reference to Harry Golombek, who worked there).

There was much to celebrate at the Garden Party as the Club President F.J. Robinson pointed out in his speech: over the years the club had won the Surrey Trophy ten times (and were the present holders), and members had won the individual championship eleven times. They had won the London League top division in 1897-8 and, though Mr Robinson didn't know it, they were about to win it again in 1921/2 - in controversial circumstances that will be recounted in two week's time.

But the crucial part of his speech comes as you realise that the occasion for the celebration was the Club's 50th Jubilee. And this, after much not-so-fast-forwarding, is where we backtrack to the beginning. Quoting from the BCM, Mr Robinson said..


"...that the club was started as part of an Institute connected with a church in Brixton some years prior to 1871: in that year, the "Endeavour Chess Club" was founded, and about 1800, the name was altered to its present title"

Which is a bit of a relief, as that is what we had described, based on our own research, in the early episodes of Brixton Byways. We reckoned that 1871 was approximate year of the inauguration of Endeavour, and in spite of the ambiguity in the phrase "started...some years prior to 1871" (does that mean the Institute or the Club?), the fact that they celebrated the 50th Jubilee in 1921 suggests that 1871 is the when the clock started ticking - though whether July 23rd is the precise birthday is anybody's guess.

Mr. Robinson's reference to "an Institute connected with a church in Brixton" takes us in to such murky waters that I have confined the discussion of it to an Appendix.

But, if the 50th anniversary was in 1921, then it follows that the 150th is only six years away in 2021. By co-incidence that also appears to be the 75th anniversary of the merger of the Streatham and Brixton Clubs in 1946. S&BCC had better start planning for this double celebration now. I wonder if Inglewood House is available.

Herne Hill Society - to whom great thanks for their generosity with photographs.
Lambeth Landmark Photo Archive .
See History Index for links to more  Streatham and Brixton Chess history.

Appendix: Where was Endeavour HQ?
Mr. Robinson linked the Club to "an Institute connected with a church". We had a stab at sorting this out in an this earlier post, when we also gave a map of the various confusing addresses associated with Endeavour/Brixton in its early days. Let's try again.

The Chess Player's Chronicle for 31 October 1883 lists the club's fixtures for 1883-4, and clearly gives 43, Vassal Road, Brixton as its home venue. This was the address, according to the Kelly's Directory for 1886, of the Christ Church Young Men's Society (Christ Church itself was, and is, on the Brixton Road, almost opposite the junction with Vassall Road). So far so good.

The club is listed as scheduling a blindfold display by Blackburne on Jan 7 1884, at the Parochial Room, Cancell Road - which is just below Vassal Road.  British History Online mentions, in the 1860s a "parsonage" and then a school in Cancell Road associated with the Christ Church on Brixton Road. The CPC listing also refers to Endeavour 2nd team fixtures for matches against (a) the Christ Church Youth's Institute, in the School Rooms, Cancell Road (Nov 15), and then again at 43 Vassal Road (Feb 28), and (b) St. John's Institute, playing in Foxley Road (Nov 21) - Foxley Road crosses Vassal Road half-way along - and then again at 43, Vassal Road  (Feb 6).

This suggests two other very local teams (CCYI and St.JI) playing against Endeavour 2nds both "home" and "away". But quite how the Parochial Rooms, the parsonage and the School Rooms relate to one another is still not really clear. One reading is that the Endeavour 1st and 2nd teams (for adults) used the Christ Church Institute's Vassal Road premises, at Number 43, for their home venue, and that the Institute ran an independent youth team, using another premise - the School Rooms in Cancell Road - for its home venue. But the institutional connections of The Parochial Room (for Blackburne's blindfold), also in Cancell Road, remains a mystery in spite of the British History Online reference.

St.John's was just around the corner in Foxley Road, and was a chess operation wholly separate from Endeavour/Brixton CC, in spite of its proximity.

The other address that we had for Endeavour in the 1870s was Mr Muggeridge's at 138 Brixton Road. This looks like a personal address maybe just used for committee meetings etc., rather than as a serious match venue. By the way: CPC in 1884 says that Mr A Osborne "has lately succeeded Mr Thatcher as Club Secretary (the latter remaining on the committee). The latter held the office back in 1870/71 at the time of the Peyer tragedy described in episode 2.

There...so much for clarification.

Blackburne's 1884 blindfold display never took place due to his serious illness. On 23 January 1884 the Chess Player's Chronicle reported that tickets already sold were valid for a smoking concert being arranged, trying to recoup their expenses. Blackburne had played eight games blindfold at the club in December 1882. More details and sources in my Blackburne biography due out in a few months' time.

Thanks Tim - looking forward very much to the Blackburne biog...does Endeavour get a mention?!

The Blackburne blindfold business cropped up also in "episode 3 of Brixton Byways".